Grandson fears Macharia, the estate administrator, will evict him and his mother from their Loresho home.

• 'There is an imminent risk of his grandfather through third parties evicting him and his mother from the said house,' reads court papers.

• Adam says he is the only son of John Gichia Macharia who died in a road accident in 2018. He is now an adult and can and should take charge, he says. 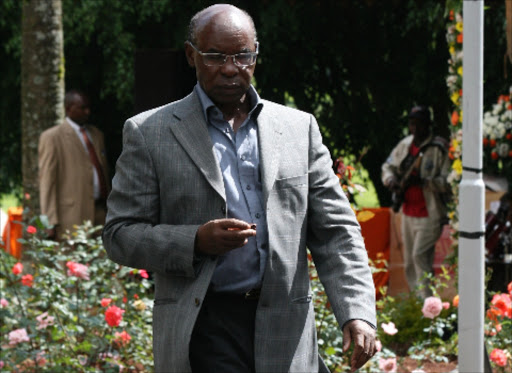 Media mogul SK Macharia is a party to a Sh1.2 billion property case with his grandson over the administration of his son’s estate.

According to the lawsuit papers seen by the Star, the properties in contention are valued at more than Sh1.2 billion and are under Macharia's administration.

His grandson, Adam Kamau Macharia, moved to court in May of last year seeking to stop his administrator grandfather from evicting him from their Loresho home.

Adam said he is the only son of John Gichia Macharia who died in a road accident in 2018.

“The grant of letters of administration was issued on April 5 2019, to Dr Samuel Kamau Macharia and Serah Njeri Macharia, being the parents of the deceased," court papers read.

"But it is on record that Serah had filed a notice of withdrawal, hence, the risk of leaving only one administrator of the state to SK Macharia who is not a dependent of the estate herein."

Through lawyer Peter Munge, Adam says he was a minor at the time the grant of letters of administration intestate were issued to his grandparents but he is now an adult.

He claims his deceased father was the sole shareholder in a company known as AKM Investment Ltd, which is named using his initials Adam Kamau Macharia.

According to court records, the late John was also a major shareholder in Directline Assurance Company where he was the executive director.

Adam claims that SK Macharia has taken full control of the business and all the affairs of the entities without consulting or informing him or any family members.

“There is an imminent risk of his grandfather through third parties evicting him and his mother from the said house,” the documents read.

The court issued a grant of letter of administration in 2019 and at the time of filing his application, the grandparents had not filed a full and accurate inventory of the assets and liabilities of the deceased.

They also had not rendered a full and accurate account of all dealings as required pursuant to the provisions of Section 83 of the Law of Succession Act.

“However, one of the administrators is acting in a manner which amounts to intermeddling, including acting in conflict of interest by directing huge and expensive advertisement through his other businesses and hence his actions are affecting the value of the estate herein substantially,” the application reads.

He says Macharia has been directing huge advertisement to Royal Media Services of which he is the chairman without considering the cost implication to Directline and the conflict of interest.

Adam had asked the court to bar Macharia or his representatives from evicting or threatening in any way his use and enjoyment of the house in Loresho.

“At the time of my father’s demise, he was residing at the Loresho property and I still reside therein to date with my mother, Lisa Anyango Amenya,” he said

Other properties registered in the name of AKM investments include four houses—one in Kyuna Crescent, Mugumo Crescent, Kibarage Estate and Nanyuki.

He also said the Loresho property is an asset of his late father’s estate and it cannot be transferred prior to distribution unless the court gives consent.

He further claims Macharia has taken over control of the board of directors of the cited companies and their management. He said Macharia also made drastic management and operations changes without the courts approval or the consent of others parties.

He says since Macharia took over at Directline, he had undertaken numerous changes which include changing the management team and removed the principal officers who had been with the company since it started operations.

He also argues that the changes at the company have diminished the value of his late father’s shareholding.

“Macharia solely and unilaterally changed the structure of the board of directors and incorporated his relative David Ngugi, Bashir Mburu who is the finance director at Royal Media Services," court documents read.

Adam claims Macharia declared himself s chairman and also brought on board Julius Orenge who has been his advocate and his longtime friend Francis Githiari.

“I am aware from perusal of documents in possession that Directline has 15 million shares distributed amongst 10 shareholders and my late father was Executive Director of the company,” the documents read.

Adam says he also used to work at Directline Assurance with his father during his school holidays.

According to court documents, his father was the majority shareholder at Directline with over 70 percent of the shares; in AKM Investments he had 10.34 per cent or 1.5 million shares.

Stenny Investments, Sureinvest Company and Triad Networks were held by other persons on his behalf; he had a cumulative share of 59.9 per cent amounting to 8.9 million shares.

Court records state that other shareholders in Directline include Royal Media Services with 9.6 per cent valued at 1.44 million shares;  Purity Gathoni Macharia and SK Macharia each have one share at 0 per cent each.

According to the exhibits filed in court, John was sole shareholder of AKM Investments with 600,000 shares, while Adam and his mother Anyango are listed as directors alongside his siblings Stella Macharia and David Macharia.

“My grandfather forcefully took over the control of all the affairs of Directline despite being a minority shareholder in that company and since then he has undertaken numerous changes steps and actions which have diminished the value of my father’s shareholding,” Adam says.

He argues that his grandfather is financially stable and he was not maintained by his father in any way.

On May 14 last year he says they received a letter from J. Orenge Advocates on behalf of Directline Assurance, demanding the transfer of the Loresho house and other assets within 30 days from the date of receipt of the letter.

The letter from Directline was addressed to Macharia, AKM investments and Adams’s mother Amenya.

Directline wanted Adam and his mother to hand over eight cars they claim were purchased using company funds but registered in the name of the company when the deceased was the executive director.

“We act for Directline Assurance Company which has instructed us to demand you hand over to our client within the seven coming days the undermentioned vehicles and motorcycles which were purchased with the company’s money but registered in the names of the company when the late John Macharia served as an executive director,” the letter reads.

The cars include two Range Rovers, two Land Rovers, a BMW, Jaguar, Jeep, Porsche 911. The letter produced in court shows the Porshe and Land Rover Discovery are registered in the name of Adam’s mother, Lisa Amenya.

In another letter addressed to Macharia as the administrator, Directline claims that the late John borrowed through his company AKM Investment approximately Sh1.2 billion that he used to make improvements to several of his properties.

The company claims that the deceased took Sh309 million to renovate the four properties,  Sh641 million to build a new property, Sh220 million  to co-run and build a project nicknamed Toy Market.