•Such murder and suicide incidents are on the rise in the service. They are blamed on work related trauma. 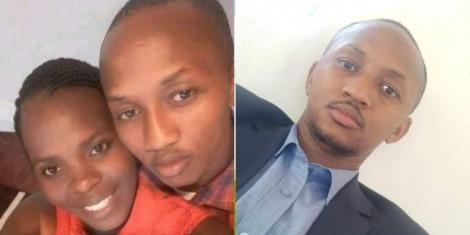 Hudson Wakise, shot and killed his wife, Pauline Wakasa, before turning the gun on himself./COURTESY

An autopsy on the bodies of two police officers who died of gunshot wounds shows they had excessive bleeding.

The two included a bodyguard attached to Interior CS Fred Matiangi and a traffic police constable.

The bodyguard Hudson Wakise, who was a GSU officer, shot and killed his wife, Pauline Wakasa, a traffic officer, before turning the gun on himself following an argument.

A postmortem on the bodies showed Wakise had two bullet wounds while Wakasa had seven.

The couple had been together since 2012 when they both graduated from GSU Training Campus in Embakasi.

Whereas Wakise 30, remained in GSU serving as a VIP protection officer his wife Pauline 29, moved to the General Duty and was deployed to traffic.

She had served in Nakuru and Nairobi.

Wakise was a sharpshooter and exemplary in his work.

He was also amongst a contingent of GSU officers who were deployed to Dusit D2 attack which took place on January 15, 2019 and left more than 20 people dead. Wakise left the attack a day later slightly injured. He reportedly received medical attention after an explosive went off injuring him.

Inspector General of Police Hillary Mutyambai said preliminary investigation showed Wakise, shot and killed his wife Pauline, before turning the gun on himself.

Officers who visited the scene found the bodies in the sitting room.

Matiang’i mourned the deaths that he termed tragic saying they show the psychosocial challenges among young officers that need attention.

“I am deeply pained by the tragic incident involving PC Hudson Wakise and his wife PC Pauline Wakasa both young and vibrant police officers with brilliant futures tragically ended in their shocking demise,” he said.

“It's a rude awakening to psychosocial challenges amongst some of our young officers that we have no choice but to now pay greater attention to. My sincere condolences to their families and friends,” he added.

Wakise, who had been off duty since April 1, reported back to work on April 6 but left at 3pm and went home outside the GSU camp in Drive Inn, Ruaraka where the incident happened.

They had apparently argued over a decision by Wakasa to move out of the GSU camp.

This followed accusations of infidelity.

She apparently moved out to the new house outside the GSU camp last Saturday because of the disagreements.

Witnesses said Wakise arrived home at about 9pm on April 6 and found his wife taking supper and an argument over her decision to move out ensued. He then drew his Jericho pistol, shot the wife in the chest seven times as she sat on a sofa.

He then turned the gun on his chin bursting his head. The children and the house help were hiding outside the house.

Pauline was a traffic officer attached to Kilimani division. Just like her husband, she had been on duty until late in the evening on Tuesday.

The pistol, nine spent cartridges nine spent, two magazines- one fully loaded with 15 rounds and a second one with six bullets- were recovered from the scene.

Police termed the case murder and suicide and declared it closed for now.

Murder and suicide incidents are on the rise in the service and have been blamed on work related trauma.