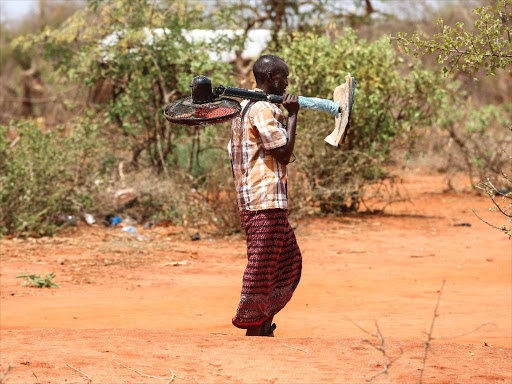 COOLING EFFECT: A man in Garissa county carries a fan. Although it's raining, temperatures are still unusually high.
Image: FILE

Daytime will continue to be unusually warm this month, even as rains increase.

According to the Met department, the lowest daytime temperatures this week will be more than 27 degrees Celsius in Central and Western Kenya while the rest of the country will be  at more than 30 degrees.

“Other than in a few small areas, above-normal land temperatures are expected to dominate everywhere for February-April 2021,” the WHO had said in a statement released earlier this year.

It said although La Nina, which brings hot weather and drought in Kenya, is waning, some of its effects may persist till June.

“La Niña and El Niño effects on average global temperature are typically strongest in the second year of the event, but it remains to be seen to what extent the current La Niña will influence global temperatures in 2021,” the WMO said.

In Kenya, Met director Stella Aura noted April will be the wettest month during this long rains season.

She noted the rains will gradually increase this week. “Rainfall is expected over several parts of the country. A few areas in the northwest and the northeast are likely to experience strong south-easterly winds with speeds exceeding 25 knots,” she said in a seven-day forecast ending on Monday.

The current mixed pattern rainfall will impact on food security in Kenya.

Last week, government urged farmers to plant high-yielding crop varieties because there will not be much rain.

Government spokesperson Cyrus Oguna said farmers should also use the input subsidy offered for fertiliser to increase their productivity.

Agriculture CS Peter Munya said the government has negotiated with some manufacturers to bring down the prices of fertiliser.

Munya said the move is aimed at cushioning farmers against the high cost of fertiliser in the market which is attributed to the increased prices of fuel. Currently, a 50kg bag of fertiliser goes for between Sh3,200 and Sh3,500.

Munya told journalists that the pricing has been negotiated to factor in the Covid-19 pandemic, exchange rates and fuel prices.

“Prices of DAP planting fertiliser will sell at Sh3,100 for a 50kg bag under the ministry’s e-voucher programme. We believe the negotiated pricing will go a long way in bringing down the cost of production to farmers in view of prevailing economic circumstances in Kenya and the world,” he said.

The e-voucher system replaced the fertiliser subsidy programme in 2019 after unscrupulous traders schemed and benefitted at the expense of genuine farmers.

2011-2020 will be the warmest decade on record, with the warmest six years all being since 2015, according to the World Meteorological Organization. Read more: https://public.wmo.int/en/media/press-release/2020-track-be-one-of-three-warmest-years-record