Beatrice Makhokha has a 3kg facial growth and requires urgent surgery to remove it.

• Initial investigations on her medical condition had already been done at the Bungoma hospital and Dr Aruasa said the results would inform the way forward.

• He said they were ready to assist her once a decision was made. 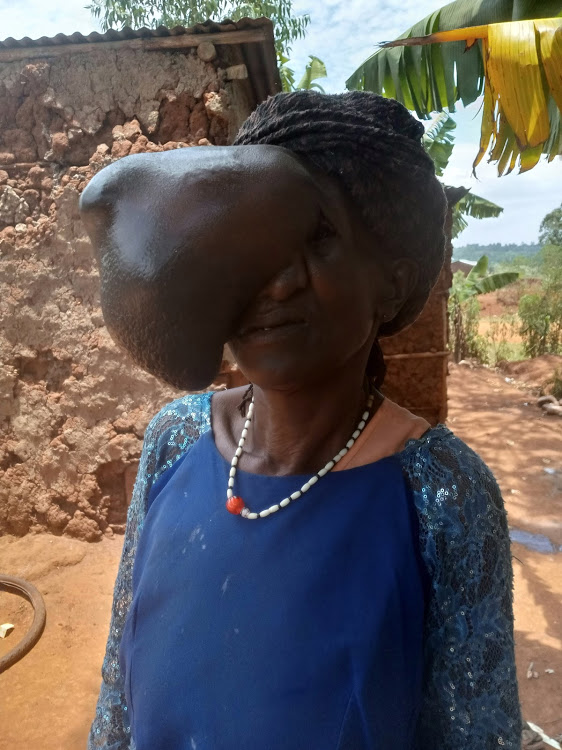 Moi Teaching and Referral Hospital experts were yesterday still assessing Beatrice Makhokha who has a 3kg facial growth and requires urgent surgery to remove it.

She was still being examined by MTRH medics and their counterparts from the Bungoma County Referral Hospital before a decision could be made to refer her to Eldoret for the operation or have the surgery done in Bungoma.

"The MTRH and Bungoma teams are discussing her investigations then they will make a decision accordingly," said Dr Wilson Aruasa, MTRH chief executive officer.

"The team is considering travelling and doing the operation in Bungoma but a decision will be made."

He said they were ready to assist her once a decision was made.

Initial investigations on her medical condition had already been done at the Bungoma hospital and Dr Aruasa said the results would inform the way forward.

"Our teams are working together so that we decide on the best way forward," he said.

The Bungoma doctors referred Makhokha to MTRH saying her 3kg facial growth may be an extension of a brain tumour. MTRH has offered to perform surgery at no cost.

However, she will meet other surgery-related and long-term post-operative care costs. After the Star highlighted Beatrice's case, well-wishers started contributing to cover other costs.

A CT scan, MRI and other tests were carried out at Bumgoma Teaching and Referral Hospital to determine the extent of the 21-year-old growth.

Bungoma hospital medical superintendent David Wanikina said the tests mostly done on her head and chest showed it could be a brain tumour.

“The condition requires a multi-specialisation approach and that's why we are referring her to MTRH,” he said.

He said the county liaised with colleagues at MTRH who assembled a team of neurosurgeons and ear, nose, dental and eye surgeons. Wakunikina said they had already sent the images and results of the tests to MTRH.

Beatrice has difficulty breathing as the growth covers one nostril.

“I can only breathe through one nostril. At night, I sleep on the right side because on the left side of the swelling makes breathing worse," she said.

Beatrice's face began swelling in January 2000 accompanied by a sharp pain that would not go away.

Donations can be sent to M-Pesa Paybill number 922379, under the account name The Star. The Star has also made it clear all proceeds will be directed entirely to her medical bills and care.