More than 350,000 Kenyans had so far been inoculated 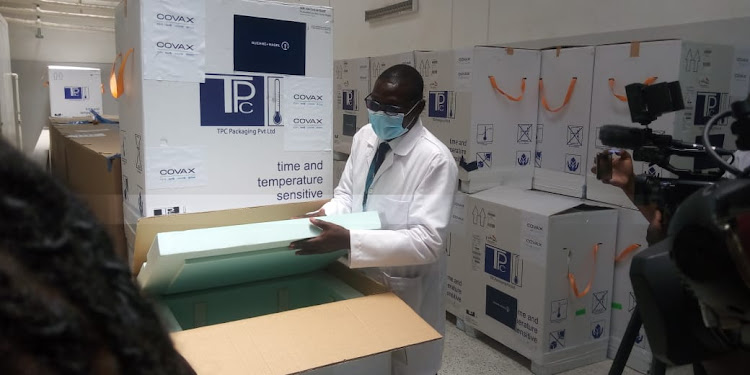 The government has said the AstraZeneca vaccine is safe.

The Health ministry noted that having an adverse event following the uptake of the vaccine does not imply a causative relationship between the vaccine and the event being experienced.

As at Thursday, more than 350,000 Kenyans had so far been inoculated since the vaccination started last month, with data showing that Nairobi, Nakuru and Uasin Gishu, Kiambu and Kisumu account for the highest number of those vaccinated with 33, seven, six, five and four per cent respectively.

By categories, healthcare workers account for 33 per cent, teachers 13 per cent, security personnel eight per cent and other people including those aged above 58 years and above account for 48 per cent.

From the number,  279 adverse events have been reported with seven of them being severe cases under investigation by the Pharmacy and Poisons Board.

From the cases, 229 were reported by healthcare workers with 51 being self-reported but have not been linked to the vaccine; 131 male cases and 148 female cases.

“By you getting the vaccine today, it does not take away the chances that you will suffer any other health events that would otherwise be going if the vaccine were no to be there,” Head of National Vaccines and Immunisation Pogramme Dr Collins Tabu said.

“For instance apart from Covid-19 how many other health events are going on in our lives? People are going down because of hypertension, diabetes, road traffic accidents, malaria, diarrhea, pneumonia and so forth,” he added.

The medic has noted that adverse events could either be related to the actual product, but is rare based on the rigorous research undertaken during the development process, or due to a product defect where a vaccine has not followed the good manufacturing practices.

This, he said is also rare but the consequences might see action such as suspension of the vaccine.

“More often than not the adverse events that do happen may be related to how the vaccine has been handled, stored and administered. That is why we take very deliberate and keen steps the make sure that our health workers are trained ahead of the vaccine administration. We also make sure that our systems and infrastructure for storing the vaccine is top notch to be able to ensure the highest quality,” Tabu said.

He added: “But the majority are coincidental events, you could get vaccinated today but it does not mean you will not suffer any other health event that would happen in the absence of vaccination.”

The ministry has further allayed reports that one person had passed on after taking the AstraZeneca jab.

Ministry officials noted it was a misreported incident from Uasin Gishu where a woman had a miscarriage, adding that the incident cannot be linked to the vaccine.

The interim report is expected to be out by Friday.

“It was a misreport. A female was pregnant and was reported to have had a miscarriage and it is reported because this miscarriage happened within the period of having been given the vaccine so it does not mean the miscarriage was because of the vaccine,” deputy director at PPB Peter Ikamati said.