He entered a plea bargain for the lesser charge of manslaughter.

• Maxton Omondi wanted food but his grandmother said there was none 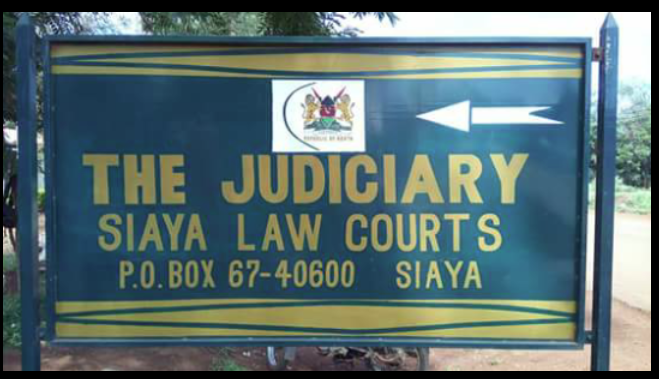 THIS WAY TO JUSTICE: The signpost of Siaya law courts.
Image: LAMECK BARAZA

Maxton Omondi went to live with his paternal grandmother for the first time in 21 years in December last year and killed her two months later after a row over food.

A court has sentenced Omondi to 10 years in prison after he entered a plea bargain for the lesser charge of manslaughter.

Court papers say on February 8, Omondi went home at Got Bondo village, in Rarieda, Siaya county at 6.30pm and found his grandmother Jael Akuru, 82, seated on the bed.

Omondi asked Akuru for food but she had none. He then asked for flour to make porridge but Akuru said Omondi's father had not brought her any supplies.

He got agitated and tried to pull her from bed. She hit Omondi with her walking stick on the head upon which he pulled Akuru off the bed and she fell on the ground. She lay there, unconscious.

Omondi ran away to his cousin’s house where he spent the night.

The following morning, Akuru was found dead. She had bled from the head, where a zigzag wound behind the forehead of about 14cm was found. She had other head injuries and a swollen right knee.

Police went to the scene, took the body to the mortuary and an autopsy was carried out on February 16. It showed the cause of death to be severe bleeding from two deep cut wounds on the head.

Omondi was also later seen washing himself. He was arrested and taken to Aram police station. He admitted to killing Akuru and his confession was recorded at the station.

“It is true I killed the deceased but I did not plan to kill her,” Omondi told the police in his confession. In court, the plea was entered as "not guilty" as it was unequivocal.

His advocate named in court papers as Ooro and Florence Akinyi asked that Omondi be allowed to enter a plea bargain. Consequently, the charges were reduced from murder to manslaughter.

Probation officer Euphemia Kidwoli in an assessment report on March 25 advised the court to send Omondi to jail for his own safety. Kidwoli said his relatives had sworn to take revenge and kill him should he be released.

“His paternal parents are bitter with him and are ready to revenge by eliminating him from their midst should he be seen there. What that means is that the accused is only safe away from the community. He is not fit for a non-custodial sentence which will be counterproductive,” he told the court.

The officer told the court that Omondi’s mother died in 2003, just three years after he was born and he was raised by his maternal grandparents.

When he went to live with his paternal relatives, last year in December 2020, he was placed under the care of his aged grandmother who is now dead.

Omondi was a student at Nyangoma Technical Institute in Bondo where he was taking a mechanical course. He was on industrial attachment when this incident happened.

“His family do not know him well because he has never lived with them all those years since he all along lived with his maternal grandparents and he only joined his paternal family in recently,” Kidwoli said in the report.

Kidwoli said Omondi’s father had been absent in his life emotionally, socially and physically and that explained his introverted personality.

Justice Roselyne Aburili said she could have sentenced Omondi to life in prison, but had considered that he was young and a first offender who overreacted to his aged grandmother.

“The accused should learn life’s skills and be rehabilitated to adapt to live with other people in the society before he can find his bearing back in the society,” she ruled.