Cane farmers to receive payment within a week of delivery

Munya says there will be 1.5 per cent interest for delayed payment 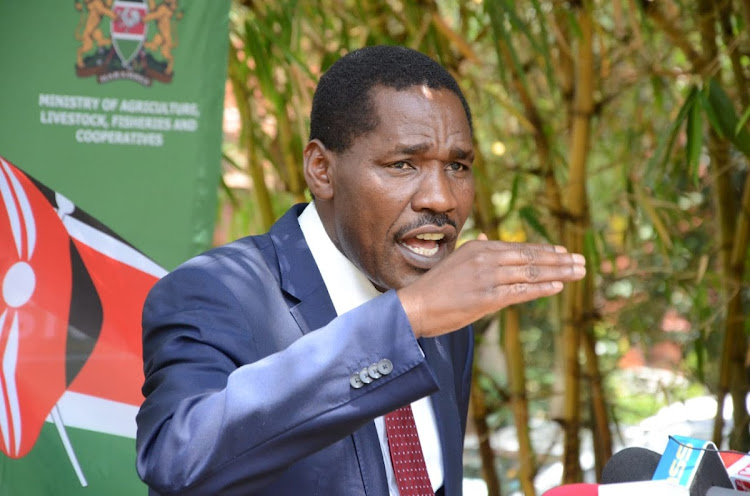 Agriculture CS Peter Munya during a press conference on the review and update of sugarcane and sugar prices at Kilimo House on March 30th 2021./DOUGLAS OKIDDY.

Millers will be required to make payments within seven days of sugarcane delivery,  Agriculture CS Peter Munya has said.

Munya said the sugarcane price will be derived through the payment formula provided by the Sugarcane Pricing Committee.

He said the Crops (Sugar) (General) Regulations, 2020 has spelt out the applicable penalties in case of breach of the conditions of the contract/agreement.

While speaking on the performance of the sugar industry, Munya said there will be 1.5 per cent interest per month on the outstanding sum payable to growers by millers in case of delayed payment.

He said millers will be required to harvest cane within 24 months once they enter into a contract with farmers.

It is now a requirement that once you enter into a contract with farmers, you must harvest their canes within 24 months.

He confirmed that cane farming is picking up due optimal operations of the private mills. He noted there is also interest and applications from millers who want to set up of new sugar mills in Siaya, Kilifi, Kisii, Uasin Gishu and Tana River counties.

“The ministry will fast track the processing of these new applications so that there can be other millers in other places to bring more competition and also improve absorption of sugarcane from farmers because now we have many farmers investing in sugarcane growing,” he said.

He attributed the increase to the fact that most private mills were operating almost at their optimum capacities due to improved availability of mature cane for harvesting.

“The sugar industry reported average cane yields of 61.64 tonnes per hectare in 2020 compared to 51.26 tonnes per hectare in 2019, this is a 20 per cent increase. The total cane deliveries in the period of January to December 2020 was 6,799,923 tonnes against 4,605,102 tonnes recorded during the same period in 2019. This represents a significant increase of 48 per cent,” said Munya adding that the increase is partially attributed to favourable weather conditions and optimal operations of the private mills.

The sugar cane availability survey conducted by Agriculture and Food Authority- in December 2020 established that there will be enough cane to produce at least 660,000 metric tonnes of sugar this year.

“True to this projection, the first two months of 2021 have recorded production of 119,552 metric tonnes of sugar indicating the capability to achieve this forecast,” he said.