Lecturers ask to be included in phase 2 of Covid vaccination

The negotiations are being done with the National Covid-19 Task Force for Vaccine Deployment. 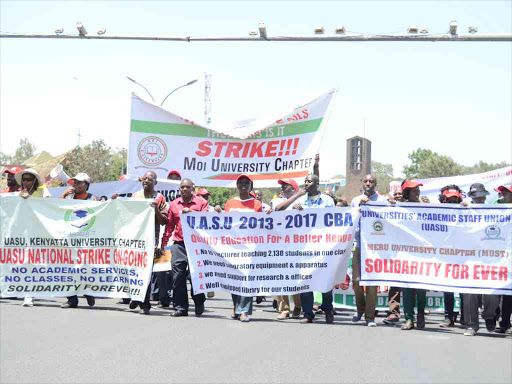 Lecturers during a strike in 2017.

Lecturers want to be included in the second phase of Covid vaccination that is set for May.

Geoffrey Muluvi, the vice chancellors committee chairman, said on Wednesday that they have initiated talks to have lecturers lined up as a priority group in the second phase.

The negotiations are being done with the National Covid-19 Task Force for Vaccine Deployment.

The task force will decide which groups will receive the vaccine in phase two, its chairman Willis Akhwale said.

The country expects to receive the second consignment of the AstraZeneca vaccine in May.

Although some universities are engaged in research around Covid-19, all lecturers were left out of the first phase of the inoculation, except the medical dons.

All medical staff are classified as frontline workers.

Muluvi said universities adopted phased reopening, meaning only a fraction of the students are in campus while the others take classes online.

However, most public universities are considering a return to normalcy beginning September.

Muluvi said the numbers will be staggered by the annual long holidays in universities, but the increase in population further exposes especially older academic staff.

Prof Mumo Kisau, chair of the Kenya Association of Private Universities, on Wednesday said the institutions will also push to be considered for the jab once dons are approved to get it.

There are growing calls from unions for the government to prioritise academic staff in the next stage of the vaccination plan.

University and Academic Staff Union secretary general Constantine Wasonga said the dons had been neglected in the administration of the vaccine in the first phase, despite most of the staff being among the most susceptible to infection.

Wasonga said this has exposed the staffers to the virus, with those testing positive being in the hundreds.

Vaccine deployment task force chairman Akhwale while launching vaccination for teachers on March 11 said other groups of staff will be included in the second phase.

“We are beginning with the teaching staff and soon when we get another consignment of about one million extra doses we are going to cover other staff,” he said.

He said anyone who is 57 years and above can provide a doctor’s note proving they need the vaccine.

Muluvi on Wednesday said he believes the age-based approach to vaccination is still the “most effective to reduce mortality”.

Unlike in Kenya, staff in public universities in other parts of the world have been considered for the Covid-19 jab.

In Beijing, China, university staff and even non-teaching staff were among the first lot of those eligible for inoculation.

Some states in the US have also included their academic staff alongside health workers and teachers as the first targeted group in vaccination.

Post a comment
WATCH: The latest videos from the Star
by LEWIS NYAUNDI Education Reporter
News
24 March 2021 - 22:00
Read The E-Paper