Song and dance in prison as inmates taste freedom

• By time of his release, Gibran Nyange had served 13 years, while Wilstone Chelango, who was sentenced in 2004, had served 17 years. Both were senior trustees at the prison.

• In prison lingo, trustees are inmates who work closely with the prison management to ensure there is order and harmony. 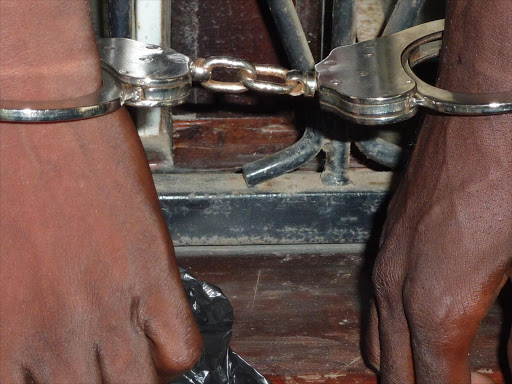 Voi GK Prison was on Wednesday morning transformed into a scene of songs, cheers and tears.

Prison staff and inmates threw a surprise farewell celebration for two senior long-serving inmates who were leaving the facility.

By the time of his release, Gibran Nyange had served 13 years, while Wilstone Chelango, who was sentenced in 2004, had served 17 years. Both were senior trustees at the prison.

In prison lingo, trustees are inmates who work closely with the prison management to ensure order and harmony. They are usually well-behaved and are considered role models for other inmates.

During the period of his incarceration, Nyange had become a master painter, while Chelango had finished his artisan course to become a metal fabricator. Both were serving jail terms for defilement.

Speaking outside the prison gate after securing his release,  Nyange, who was jailed at 19, said he was delighted to take his first breath of freedom since 2008 and expressed optimism that society would welcome him back.

He added that he was a transformed man, having acquired relevant skills during his imprisonment, and would use the skills to transform society.

“I am happy to be out here. I just want to go home and pick up my life,” said the elated ex-convict.

He added that he would put the painting skills he had acquired in prison to earn a livelihood by finding work in homes and institutions.

Mzee Crispus Mwanjeve, Nyange’s father, who had come to meet his son outside the gate, could not hide his joy when his son was released. After warm hugs and bouts of laughter, the old man said the community was ready to accept him back.

“My son was lost but now he is back. Everyone in the village is at my home waiting to take him back,” said the father.

They were both hoping that society would accept them as they are reformed people and stop judging them using their past.

Chelango, who was jailed at 23, said he was eager to meet his family in Kilifi. He said that though some might not recognise him because of his long absence, he was willing to work on strengthening his bond with them.

"A lot of things have happened while I was in prison, especially in the family. I know there are new members who have never met me, but we will spare no efforts to catch up,” he said.

Each of the two received a complete set of toolbox to jumpstart their lives as farewell gifts. Nyange got a painter’s full kit with brushes and Chelango received a set of electric drill and related equipment.

The tools were bought from donations by prison staff and other well-wishers. Chelango said he would start a workshop where other inmates who would regain their freedom can have a place to work.

"With these tools, I plan to start a workshop. When those friends I have left here are through with their sentences, they can come and we work together,” he said.

Ken Ondijo, officer in charge of Voi prison, said the two inmates had set high standards for discipline and had become good examples for others. He said prisons are meant to reform lawbreakers and enable them to be reintegrated into the community.

Ondijo noted that anyone can end up in prison and insisted on the need to create an environment where people can interact without prejudices.

“These two have served their terms and are ready to get back to society. The tools we have given them will boost them to start their life because they have the skills to use them properly,” he said.

Ondijo appealed to society to welcome reformed inmates, stating that social support was necessary for total reintegration. He disclosed that the prison management was in touch with the families of the two former inmates.

“The families are waiting for them. We will transport them back to their homes and hope they will use these tools to start their work. They have the required skills and they can now engage in nation-building activities,” he said.

There have been cases where freed former inmates after serving their terms are subjected to extreme stigmatisation by the society. This, behavioural experts say, might lead them back to crime.

Post a comment
WATCH: The latest videos from the Star
by KNA By Janet Nyambura/Christine Matunda
News
21 March 2021 - 05:00
Read The E-Paper