•The judges dismissed the application saying it lacks merit. They added that Prat and Weru will elect whether to participate in the proceedings or not. 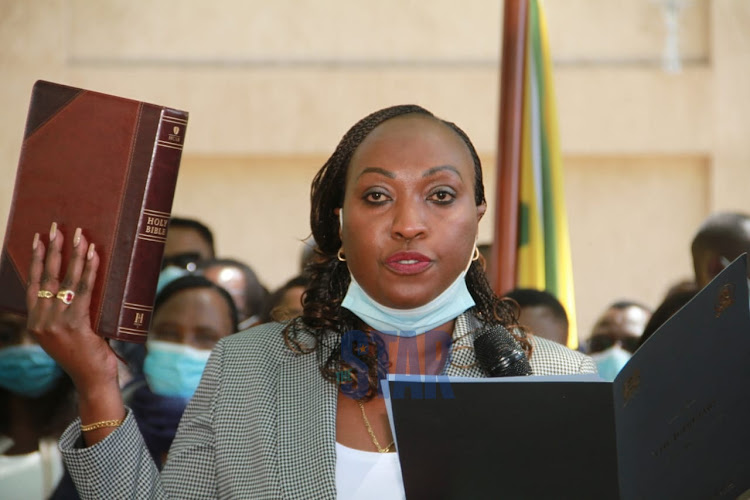 Anne Kananu when she took the oath of office as the deputy governor Nairobi county on January 15, 2021.
Image: FILE

A three-judge bench on Thursday said no one should be sworn in as Nairobi Governor until matters touching on DG Ann Kananu are heard and determined.

The bench dismissed another application by Kristina Prat and Jane Weru who sought to to be excused from participating in the cases before court. They also sought to have some paragraphs in the petitions struck out.

The judges dismissed the application saying it lacks merit. They added that Prat and Weru will elect whether to participate in the proceedings or not.

Earlier, the Attorney General's bid to have the bench return a file touching on the impeachment of former Nairobi Governor Mike Sonko to Acting Chief Justice Philomena Mwilu to a appoint a different bench to hear the case was dismissed.

The justices said returning the file to Mwilu will create an undesirable precedent and can be seen as forum shopping.

"In circumstances of this case and considering that this court is yet to hear substantive arguments in the case, we decline to refer the file for empanlment of a seperate bench," they said.

Attorney General Kihara Kariuki had asked a the bench to consider returning the Sonko file to Mwilu to appoint a different bench to hear the matter.  Through advocate Paul Nyamodi, the AG said Sonko’s matter and that of Ann Kananu challenging her vetting, appointment, swearing in and assumption of office should be handled by different benches.

The cases were earlier this year consolidated and the matter was placed before Mwilu to appoint a bench. Mwilu subsequently appointed Justices Said Chitembwe, Weldon Korir and Wilfrida Okwany to hear the case.

However, the AG said a determination in Sonko’s matter may impact and interfere with the determination in Kananu’s file. “Consider directing this matter be returned back to DCJ to appoint another bench because this case deals with impeachment of sonko and the other matters deals with the manner in which Kananu was sworn in,” said Nyamodi.

Post a comment
WATCH: The latest videos from the Star
by SUSAN MUHINDI Court Reporter
News
18 March 2021 - 15:02
Read The E-Paper