The sole proprietor of Leon Interior Deco and Design Ltd said she went to Kemsa on her own volition as she didn’t know anyone at the entity.

• Eunice Cherono invoked the name of God saying her persistent prayers delivered the tender, which is among those under probe by the House team. 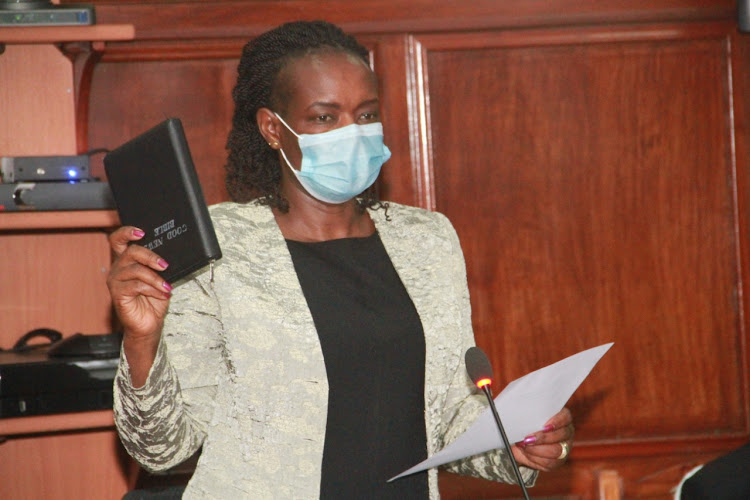 A nurse on Tuesday told members of the Public Investments Committee that God led her to a Sh42 million tender at the Kenya Medical Supplies Agency.

Eunice Cherono invoked the name of God saying her persistent prayers delivered the tender, which is among those under probe by the House team.

Cherono told the Mvita MP Abdulswamad Nassir-led committee that she walked to Kemsa after days of prayer and walked out with the deal without intervention of any influential person at Kemsa or outside the medical supplies authority.

“Before walking to Kemsa, the situation in my company was so bad and I had prayed about these Covid-19 supplies. I prayed about it. And I can tell you without fear this is God’s doing. I prayed for it. God does miracles,” Cherono told the MPs.

The sole proprietor of Leon Interior Deco and Design Ltd said she went to Kemsa on her own volition as she didn’t know anyone at the entity.

She was, however, hard-pressed to explain how a company dealing with interior décor bagged a tender to supply of medical-related supplies.

Her company is not among those that are prequalified by Kemsa, with members raising concerns she may have been used by some bigwig owing to her lack of capacity.

This was after Cherono revealed to the committee that she sourced Sh30 million from another company — Mason Austin Ltd — whose owner she had neither met nor done business with before.

She admitted her company had never handled pharmaceutical business since its incorporation in 2011.

“I can tell you without fear that God directed me there (to Kemsa). I prayed for it and I can tell you my prayer was answered," Cherono said.

She told MPs that after walking to Kemsa, she found a receptionist who told her to wait after she explained that she was there to look for a tender to supply masks.

The woman, she said, helped her secure a letter of commitment to supply masks and personal protective equipment.

More questions were raised after it emerged that the letter of commitment was dated April 30 yet the proprietor’s letter of intent was dated May 6, 2020.

“Ideally, a letter of intent should come first before a letter of commitment,” Likoni MP Mishi Mboko said.

MPs demanded explanations on how her company brought on board Mason Austin Ltd, the company that injected Sh30 million for supply of masks to Kemsa.

Cherono said the firm in question had capacity to supply at 70 per cent of the tender price and since she had no money, she roped them in.

Nassir said the move by the sole proprietor could pass off as scheming in anticipation to make millions in the process.

“You had contacts at Kemsa and we want to know the people behind this deal. It cannot be that the only thing that you did is to pray to God,” Nassir said.

Cherono said she approached directors of Mason Austin Ltd to finance the procurement, out of which she made Sh12.5 million in profit.

“My business was so low from August 2019 since the economy was doing badly. I had to be alert on any corner of business that I would get an extra coin,” she said.

Separately, a director of a firm that won Sh180 million for the supply of 20,000 PPE also ignited suspicion with her admission that some Chinese nationals helped her get masks.

Elizabeth Seret, the director of Duke Agencies Ltd, revealed to members that she was approached by some brokers, saying she didn’t know how they learned she had just received a commitment letter.

She told MPs that the brokers, who were bidding for the faceless Chinese nationals, went to her home and insisted that they get paid in cash.

“It appeared the brokers and the Chinese used to get information of anyone who was given a commitment letter by Kemsa,” Seret said.

She sparked fury with her sentiments that she could not remember the names of the Chinese nationals despite trading PPEs worth Sh600,000.

Mention of Chinese suppliers, that had apparently imported masks prior to the virus’ outbreak in the country, is commonplace in the PIC hearings.

“It appears there is someone who was getting information from Kemsa telling them (Chinese nationals) that this and this firm has been given a commitment letter,” Nassir observed.”

“Who is this Chinese that you bought these items from? Who are the brokers who brought them to you? Can you give us these details in writing? How did you pay them?”

The probe on Kemsa suppliers continues with more witnesses lined up in the course of the week.