MPs have since deleted the provision as initially put forth by the Justice and Legal Affairs Committee in the draft Referendum Bill, 2020. 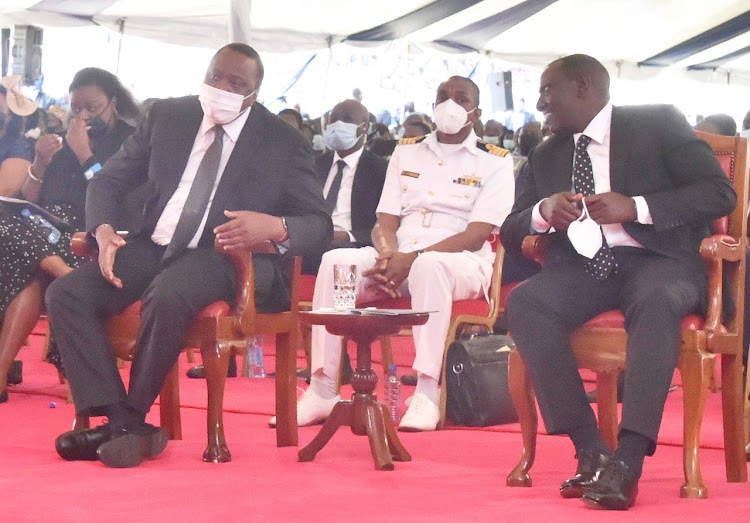 Deputy President William Ruto’s push for multiple questions in the BBI referendum has suffered a huge blow after MPs struck a deal to block the quest.

This is after MPs allied to the handshake partners deleted the provision initially put forth by the Justice and Legal Affairs Committee in the draft Referendum Bill, 2020.

JLAC and the Constitution Implementation Oversight Committee unanimously agreed that there would be no referendum options — which other people call multiple questions.

In supporting the move, Minority leader John Mbadi said having a multi-choice referendum will provide legislative challenges, especially where a number of issues are being addressed.

“We know how our polling stations are structured or how they are. We need to at least put some systems, where those who are supporting, those who are taking similar stand on a Bill state whether it is yes or no,” Mbadi said.

“Those who are taking similar stand need to find a way of coming together not necessarily to take responsibility but for ease of conducting a referendum. Otherwise, you would definitely cause a lot of confusion in the process,” he said.

“We agreed that under Article 257, whoever is promoting an initiative and has suggestion must reduce it into a bill. The question has to be only one – adopt, or not,” Amollo said.

“We agreed that you cannot have a general question or suggestion in a referendum. Promoters of such must reduce it into a bill as required by the Constitution,” the senior counsel said.

"Those require that they must be reduced into a bill."

“There is no other provision of the Constitution that talks of a referendum. This brings the question; can you hold a referendum on any other question? The question will be; what will be the constitutional basis?” the MP asked.

He said the harmonised report of the two committees was unanimously adopted. CIOC chairman and Ndaragwa MP Jeremiah Kioni acceded to the assertion.

Amollo said it would mean that anyone who wants to counter the BBI must follow the process, not latch on an ongoing initiative.

But Kilifi North MP Owen Baya termed the proposal selfish and meant to serve the interests of the politicians of the day.

The Ruto ally told the Star that lawmaking should be for posterity and should not be informed by the events of the day.

“This referendum should not be seen to be for this BBI nonsense. Laws should be made for posterity. I am not going to support a bill that has selfish and narrow interests.  Members of Parliament who have vested interests in this bill should keep them aside,” Baya said.

He added, “I will personally reject a bill that does not entrench all aspects of the conduct of the referendum, if it does not buttress what is in the IEBC Act.”

Majority leader Amos Kimunya, however, differed saying the legislation is not to fix a specific case but will apply for future instances.

MPs also agreed that the role of drafting the amendment bill is purely for the promoters.

Also dropped was the proposal by CIOC that the Constitution of Kenya (Amendment) 2020, Bill could be redrafted by National Assembly clerk and the Kenya Law Reform Commission.

MPs also conceded that county assemblies would use their own standing orders to reject, or adopt the bill.

The time within which they have to communicate the decision to Senate and National Assembly speaker is yet to be agreed upon.

For a parliamentary initiative, MPs proposed that once Parliament passes an amendment requiring a referendum the President has to forward the bill to the IEBC within 14 days.

Multiple questions and holding the plebiscite in 2022 formed the gist of Ruto’s campaign against President Uhuru Kenyatta and ODM leader Raila Odinga-led initiative.

ANC nominated MP Godfrey Osotsi, however, dismissed the multi-choice questions as an entry strategy by the anti-BBI brigade to get into the law change initiative.

Osotsi noted that global best practices have a Yes and NO referendum to avoid confusing voters.

Opponents of the referendum drive have been blocked from coming up with other options to compete with a proposed amendment.

A petition challenging the outcome of a referendum – a case that has to be well-founded — will be filed within 14 days.

Once challenged, a three-judge bench has to decide the case within 30 days, matters which vacate at the Appeals court.

Appeals are to be determined in 21 days with litigants expected to file within 14 days; and provide for offences applicable to conduct a referendum.

The proposed law denies MPs and MCAs a chance to tinker with a bill after it is published and supported by one million signatures.

It also provides the procedure for conducting a referendum. CIOC timelines were adopted.

IEBC will have seven days to assign symbols for use in the plebiscite after the bill is communicated by Parliament.

The electoral commission will conduct the referendum and not delve in the bill’s content.

Said the country should have a multiple-choice referendum.
News
7 months ago

Raila says multiple choice referendum will not be disadvantageous to 'illiterate' citizens.
News
5 months ago

MPs reject bid for multiple questions and for plebiscite to be held alongside elections
News
7 months ago
by LUKE AWICH and MOSES ODHIAMBO
News
17 February 2021 - 06:55