Colleagues eulogised him as icon of peace

•The speaker said the late senator was a distinguished civil servant and a peacemaker who led several peace missions both within the country and in region.

•Lusaka said Haji was part of the Kenyans delegation that met with the transition federation of Somalia on October 18, 2011. 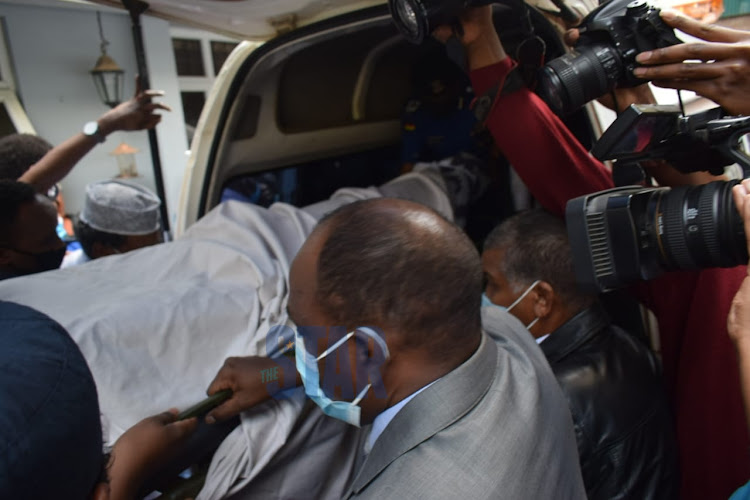 Family members carry the body of the late Garissa Senator Yusuf Haji into a hearse to be transported to a mosque in South C for prayers
Image: CHARLENE MALWA

The lawmakers extolled the late senator in a special motion moved by Minority leader James Orengo.

The lawmakers described their colleague as an icon of peace, humble, a patriot and selfless leader who put the country ahead of everything else.

“The late Haji was a pillar of wisdom. He distinguished himself as a peacemaker and fighter for justice. We have indeed lost a humble man, a true patriot, a selfless leader and a statesman,” Lusaka said.

The speaker said the late senator was a distinguished civil servant and a peacemaker who led several peace missions both within the country and in region.

Lusaka said Haji was part of the Kenyan delegation that met with the transition federation of Somalia on October 18, 2011.

“June 2012, Haji signed another agreement on behalf Kenya, essentially reinstalling Kenya Defense Forces in Somalia to bring peace in Somalia and neutralise the threat of terrorism,” he said.

Locally, Haji, in his capacity as the chairman of the National Security committee, led peace missions in Turkana, Marsabit and Mandera that has been hit by a wave of insecurity caused by al Shabaab and cattle rustling.

While moving the motion, Orengo eulogised Haji as an astute leader who stood above his peers on matters public service.

“If there is anybody who enjoyed an open debate, it was Senator Haji. Anytime you said anything he did not like, he took it in good spirits.

“One of the very first pastoralists to rise to the rank of provincial commissioner was Haji. He excelled in relating to other people wherever he was. That was the biggest asset of his character. He learned to cope in any set up where he was transferred,” Poghisio said.

Vihiga senator George Khaniri narrated that besides Haji campaigning for him to win the Hamisi parliamentary by-election to succeed his father, Newton Khaniri, the late senator was a close family friend.

“I had a close relationship with him because my own father died in the hands of Yusuf Haji,” he said.

He said that Haji drove his father in his Land Rover to a hospital in Kisumu after he collapsed while addressing a gathering.

“Death has robbed the country of a great leader. A leader who was forthright, honest to the core, peace maker, patriot, selfless, generous and above all humble. I liked his humility,” he said.

Venerable Haji takes many secrets to the grave

Haji was respected by to friend and foe alike and he did not shy away from controversy.
News
9 months ago
by JULIUS OTIENO Political Reporter
News
16 February 2021 - 18:11