Sort out your issues once and for all - Duale tells UhuRuto

Says the two should stop bashing each other in public gatherings.

• Duale on Saturday said a time has come when Uhuru and Ruto should seat down as gentlemen and resolve whatever differences they might be having.

• Duale's sentiments come a day after President Uhuru Kenyatta asked Ruto to choose which side of government he was in. 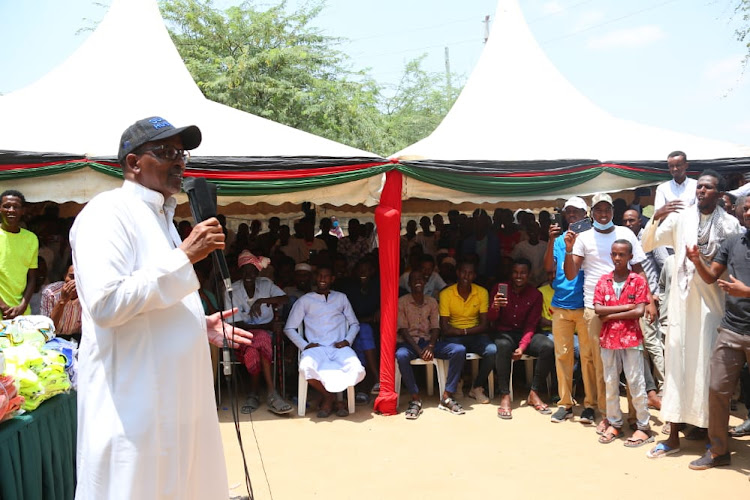 Garissa Township MP Aden Duale has asked President Uhuru Kenyatta and his Deputy William Ruto to sort out their differences.

Duale on Saturday said a time has come when Uhuru and Ruto should seat down as gentlemen and resolve whatever differences they might be having.

Duale spoke in Garissa town where he met with various football clubs from the entire Garissa county.

"Malumbano ya chama cha jubilee yanadhiri na kuharibu maisha ya wananchi wa Kenya. Seat down like gentlemen and sort out your differences once and for all for the sake of the future of our country," Duale said.

Duale who is the immediate former Majority Leader of the National Assembly of Kenya under the Jubilee Party said it was disheartening that the two have resorted to bashing each other in public gatherings.

Duale's sentiments come a day after President Uhuru Kenyatta asked Ruto to choose which side of government he was in.

After launching a health clinic in Uthiru, Uhuru said there was no way his deputy would conveniently criticise his administration and at the same time take credit for Jubilee's successes.

The President said he wouldn’t want to engage in unnecessary political fights calling out the DP’s side for engaging in double-speak.

“If you feel the government is good, stay with it. If you keep criticising it, leave and let others continue working," Uhuru said.

Ruto: I'll not resign despite my duties being taken away

DP says his position is "my place in the Constitution.”
News
1 year ago

“Our aim is unity of the people and not to be divided. We want people to pull as one. We want leaders who will cater to issues affecting Kenyans and not divisive politics,” the President said.

But Ruto in his response while attending a fundraiser in Isiolo county said he would not resign.

The DP said he would continue discharging his duties as the deputy president because that is his place in the constitution.

While insisting he will instead continue supporting the President to roll out Jubilee administration's programmes, Ruto said he will respect the President despite having been stripped of his duties.

“You all know I am a very respectful person. The President and I campaigned as a team and we formed the Jubilee government. I respect the President and he is the one who makes the final decision in this government,” Ruto said.

He added, “I have never contradicted the President because of respect I have for him. Even though the work I was supposed to be doing as the Deputy President is being done by others, I have respected the President on that decision because I want the unity of the country."

I have never disrespected Uhuru - Ruto