BBI vote appears to be on shaky ground - poll

• However, there is a potentially high swing vote, with 25 per cent expressing ignorance and 11 per cent saying they don't care 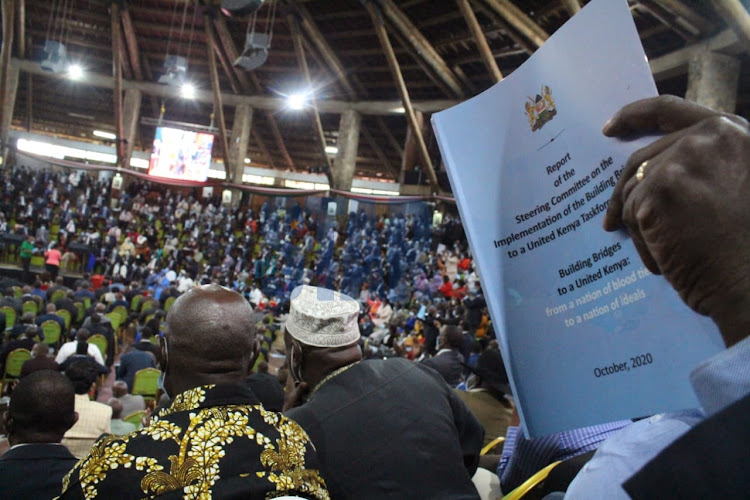 The Building Bridges Initiative referendum appears to be on shaky ground, according to a new poll by the Radio Africa Group.

The poll found that 43 percent of Kenyans do not support BBI compared to 21 percent who do support BBI.

However there is a potentially high swing vote as 25 percent say that they "do not know much about BBI" while 11 percent "don't care either way".

The BBI process has been spearheaded by President Uhuru Kenyatta and opposition leader Raila Odinga since their handshake agreement in 2017. However the omnibus bill has proved problematic as some of its clauses are more popular than others.

County assemblies are presently debating the Constitution of Kenya (Amendment) Bill, 2020 which will actualise the BBI process and which needs at least 24 counties to approve it before it is returned to the National Assembly.

The random computer-aided telephone survey was conducted between January 25 and February 5  with 3,127 respondents from all 47 counties with the sample split proportionate to the population size. It carries a 1.75 percent margin of error.

The poll was carried out at the same time as Uhuru met opinion leaders from Mt Kenya at Sagana State Lodge on the weekend of January 30 to rally support for BBI. He explained the BBI benefits to the delegates including the increased allocation to counties of 35 percent of government revenue.

This poll comes too early to detect any impact of the Sagana mobilisation but it shows that support for BBI process has dropped since October last year.

Uhuru and Raila unveiled the final BBI report in Kisii on October 21, 2020. A Radio Africa poll at that time showed that 33 per cent of Kenyans supported BBI while 34 percent opposed it.

“BBI support has taken a hit, dropping 12 per cent of nationwide support since October 2020,” the survey states in part.

The regional splits in the survey poll show that Raila’s Nyanza backyard has the highest support for the BBI at 46 percent, followed by Lower Eastern at 26 percent, and then Nairobi and Western with 22 percent support.

The least support for BBI is in North Rift and South Rift where only 13 percent of respondents supported it. But surprisingly in Central Kenya, where Uhuru is still the undisputed leader, there is only a paltry 16 percent for BBI.

The highest level of opposition to BBI was in Western, Coast and Nairobi where 51 percent and 50 percent respectively said they opposed it. However an alarming 46 percent of respondents in Central Kenya said they opposed BBI. Even in Nyanza 27 percent said they did not support BBI.

However the ultimate result of the BBI referendum, that government wants to take place in June, could be affected not just by undecided voters but by voter apathy. The poll found that 40 percent of respondents said they would not vote although 60 percent said they would vote.

That voter apathy is massive in Ruto’s political backyard in the Rift Valley with 53 percent of respondents in the North Rift and 52.6 percent in the South Rift saying they will not vote. This could potentially guarantee a BBI victory in the referendum.

At the Coast and in North Eastern, 50 percent and 45.8 percent respectively said they will not vote.

Speaking yesterday after meeting ODM and Jubilee chairmen drawn from 17 constituencies in Nairobi, Raila said BBI will easily sail through in the referendum. He likened BBI to the River Nile whose mighty flow to the Mediterranean Sea is unstoppable

Saturday meeting will be attended by top state officials from Mt Kenya, aim to counter Ruto.
News
1 year ago

Raila planning a major meeting with stakeholders from Luo Nyanza on February 8
News
1 year ago
by STAR REPORTER The Star
News
11 February 2021 - 07:00