• UN says the worst appears to be over but vigilance essential, spraying continues.

• Immature swarms continue to spread westwards across northern and central counties where there are about 20 small swarms, about 123 acres in size.

1. Locusts are the oldest migratory pest in the world. 2. Desert Locust is the most devastating of all locust species. 3. They form swarms that can fly up to 150 km a day. 4. They eat their own weight in food daily. 5. A very small swarm can eat the same amount of food in one day as about 35,000 people! 6. If infestations are not detected and controlled devastating swarms can form. 7. This is having severe consequences on food security. To protect livelihoods and ensure food security FAO uses the latest technologies to monitor and assess the situation and assists countries in the control of plagues. Subscribe! http://www.youtube.com/subscription_center?add_user=FAOoftheUN #ZeroHunger Follow FAO on social media! * Facebook - https://www.facebook.com/UNFAO * Instagram - https://instagram.com/fao * LinkedIn - https://www.linkedin.com/company/fao * TikTok - https://www.tiktok.com/@fao * Twitter - http://www.twitter.com/fao/ * Weibo - https://www.weibo.com/unfao © FAO: http://www.fao.org #ZeroHunger #SDGs #Agenda2030 #GlobalGoals 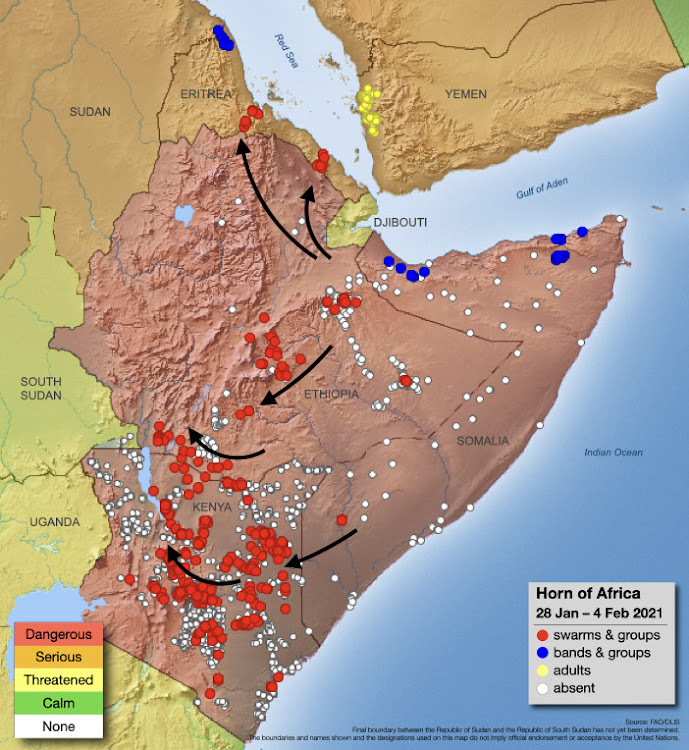 Locust situation threat in the Horn of Africa.
Image: FAO

The peak of the Kenya desert locust invasion has passed.

The UN Food and Agriculture Organization has reported the worst of the invasion is over.

It said there have been no new reports of incoming swarms in the past two days and no further swarm reports in Wajir and Garissa counties.

The latest FAO locust watch indicated, however, that immature swarms continue to spread westwards across northern and central counties where there are currently about 20 small swarms present, mostly about 123 acres in size.

“Some of the swarms are in community areas and therefore cannot be treated. A small swarm reached Elgeyo-Marakwet county in the west and another one was reported today in Turkana county in the northwest.

"Hence, the risk that a few swarms could reach eastern Uganda and southeastern South Sudan,” the update read.

FAO said intensive control operations are underway in Kenya and southern Ethiopia to reduce the potential scale of the next generation of breeding.

“If rains fall in the next week or so, the swarms will quickly mature and lay eggs that will hatch and cause hopper bands to form. Otherwise, this will be delayed until the arrival of the seasonal rains in March,” the UN said. 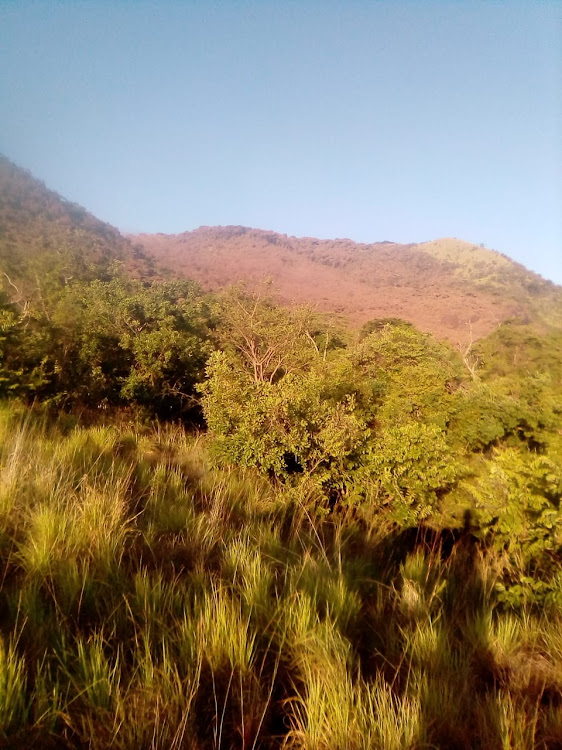 Agriculture CS Peter Munya said on February 3 the country is not out of the danger yet.

He said the control process in Ethiopia, South Sudan, Yemen, Eritrea and Somalia is slow, hence, the winds are moving the swarms to Kenya.

“But the government with the support from FAO is managing the

"We have many aircrafts out there in the northern frontier region to cope with the situation. We have a ground team spraying and another team doing aerial spraying where need be,” he said.

CS Munya says the government is relying on aerial surveillance to monitor swarms and then spray.
Counties
1 year ago