Time out of school takes its toll on learning

The performance is reflected in a Knec national assessment conducted in October.

• Performance  in all subjects dropped across the board but private schools outperformed public, urban schools outdid rural ones and girls outshone boys.
• Tests were administered to determine how much learning was set back by nine-months' school closure since mid-March caused by Covid-19. 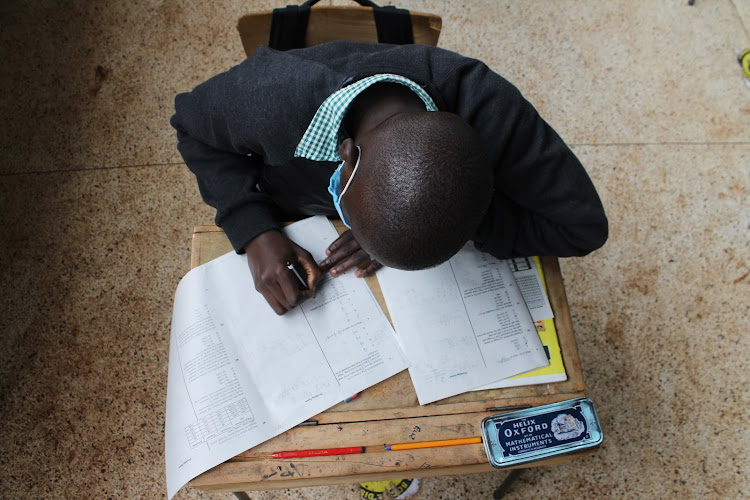 LEARNER: A Standard 8 pupil at Westlands Primary School during a Mathematics test on the first day of the national assessment exam on Wednesday, October 21, 2020.
Image: ANDREW KASUKU

Nine months out of school caused learning setbacks across the board, a national assessment has shown.

Despite the setbacks - caused by Covid-19 school closure - private schools did better than public institutions, urban schools outdid private ones and girls outshone boys in all aspects of the new curriculum.

The performance is reflected in a Kenya National Examination Council national assessment conducted in October.

The Knec said the low skills levels can be attributed to lack of face-to-face learning while schools were closed. They closed in mid-march and reopened in early January.

The tests were administered to determine how much of a setback was suffered and identify areas where interventions are necessary and how to address shortcomings.

A sharp drop was registered compared with the performance posted a year ago when learners were in Grade 3.

A similar assessment was carried out in 2019. The Knec said that as the assessment was administered to the same cohort of learners, it was expected that performance at all levels would be similar or more comparable.

A decline was registered in all subjects assessed in the proportion of learners meeting and exceeding expectations.

Those in private schools posted better results in all subjects.

The ranking of the assessment also shifted from the traditional ranking in school, determined by learners marks and number.

Instead, the learners were ranked along parameters of how well they understood topics tested.

In English, for instance, learners in private schools performed better in listening and speaking. Sixty-nine per cent of learners met the required expectations.

In public schools, however, only 47 per cent met the same expectation.

In reading out loud, only 41 per cent of the learners in state-run schools met expectations. In private schools 58 per cent attained the minimum.

A similar trend was observed in Kiswahili.

It should be noted that these are skills that a learner ought to have acquired by the time they complete lower primary, Grade 3.

The examination council raised concern about the low performance in the English language. Ripple effects are expected to hit other subjects as English is the medium of instruction in all other subjects.

Learning assessment will inform teachers and other stakeholders on learning losses and gaps caused by lack of face-to-face learning and limited access to remote learning. The aim is to develop targeted interventions.

Girls are also turning the tide on boys, with the study revealing the females achieved better results in all subjects tested.

In the number of words read correctly per minute, 47.41 per cent of the boys performed below expectations compared to 40.99 per cent of girls.

A similar trend in performance was reported in Kiswahili where girls outperformed boys.

In Mathematics, girls outperformed boys in all sub-strands except in topics of position and direction, shapes, time, and money.

The performance in Mathematics was similar to that in environmental activities, Science and Technology. A higher proportion of girls exceeded expectations in all areas assessed.

The study also revealed regional disparities in performance. Higher proportions of learners in urban schools exceeded expectations in all skills and content areas.

In Mathematics, higher percentages of learners from public schools performed below expectation compared to those in private schools.

This trend was replicated in Environmental Activities and Science and Technology, where higher proportions of learners from private schools exceeded expectations in all areas.

In all language skills and content areas, higher proportions of learners from rural  schools performed below expectations compared to those from urban schools.

Close to half, 46.23 per cent, of learners from rural schools performed below expectations compared to 33.40 per cent of learners in urban areas.

Learning gaps were more pronounced among boys and learners from schools in rural areas, as well as those in public schools.

In rural areas, the problem is worsened by inadequate ICT devices and poor internet connectivity to facilitate remote learning.

KNEC recommends the Education ministry should target interventions and provide learning resources in public schools, especially those in ASAL and poor areas.

It also recommends the Education ministry should increase ICT infrastructure in schools to improve remote and blended learning.

It also calls for continuous capacity-building of teachers to improve learning outcomes.