• Victor Rasugu, executive director at the Network for Adolescent and Youth of Africa (NAYA) said the ban had fuelled unsafe abortions in Kenya. 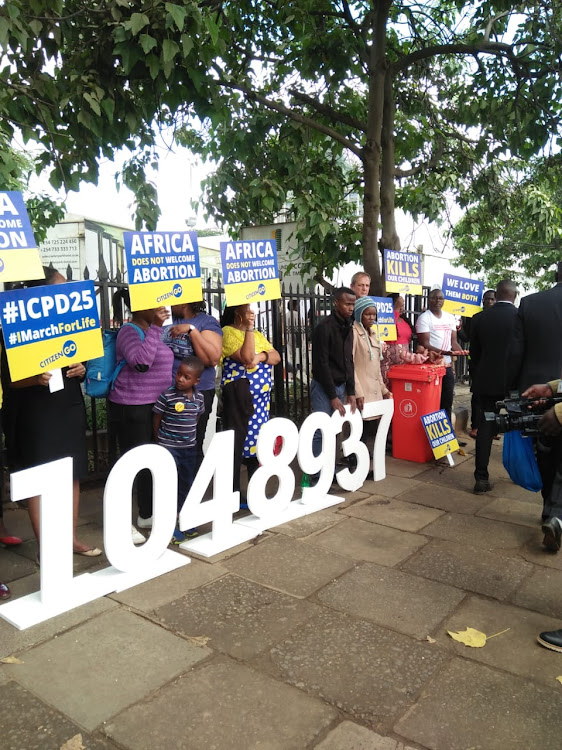 The anti-abortion protesters outside the KICC on November 13, 2019, during the ICPD. US opposed the meeting, held in Nairobi.

Kenya could once again become the centre of sexual and reproductive health networks in the region after US President Joe Biden restored funding for such services around the world.

The Biden administration last week rescinded the 'Mexico City Policy', also known as the 'global gag rule' that was enforced by his predecessor Donald Trump in 2016.

Kenyan groups said this had crippled even those not involved in abortion care but were merely providing HIV-related services.

“Organisations providing care in the fields of HIV/Aids, malaria, maternal and child health which also may have provided reproductive care to women and girls, abortions, or abortion counselling — were at risk of losing billions of dollars in US aid unless they stopped any and all levels of their abortion care,” said Nerima Were, acting deputy director at Kenya Legal and Ethical Issues Network.

The global gag rule was first introduced by US President Ronald Reagan in 1984 and has been rescinded and reinstated by subsequent Democratic and Republican presidents.

However, Trump greatly expanded the policy to ban family planning funding, about $600 million per year (Sh6.6 billion) and all US global health aid (about $9 billion a year).

That crippled or weakened dozens of NGOs in more than 60 countries, including Kenya, that receive funding from the US government or are supported by US-funded organisations.

“The Trump administration went overboard with the policy, to the point of crippling organisations that provided HIV care, malaria and TB treatment. Many had to shut down, setting back years of extensive work to integrate health services,” said Jedidah Maina, the executive director at Trust for Indigenous Culture and Health (TICAH), a Nairobi-based NGO.

Nelly Munyasia, head of the Reproductive Health Network Kenya, which was funded entirely through Planned Parenthood Global, said she lost all funding in 2016.

She laid off eight of her 13 staff and greatly reduced the network’s activities in Kenya.

Munyasia says most organisations in Kenya that handle abortion care also have HIV programmes, family planning, maternal health, and water and sanitation because they are all integrated.

Victor Rasugu, executive director at the Network for Adolescent and Youth of Africa (NAYA) said the ban had fuelled unsafe abortions in Kenya.

“This very policy is behind the many headlines we’ve been seeing in the last four years where Kenyan women die after visiting quacks to procure unsafe abortions. The directive made it impossible for healthcare providers to provide life-saving post-abortion care to these women. To make matters worse, it gagged them from even counselling these women long before they made the decision,” he said.

He also restored funding to the UN sexual and reproductive health agency UNFPA, estimated at $69 million (Sh7.6 billion) a year.

“The return of the United States as a major donor to UNFPA at this challenging time sends a message of hope to vulnerable women and girls everywhere,” said UNFPA executive director Dr Natalia Kanem in a statement.