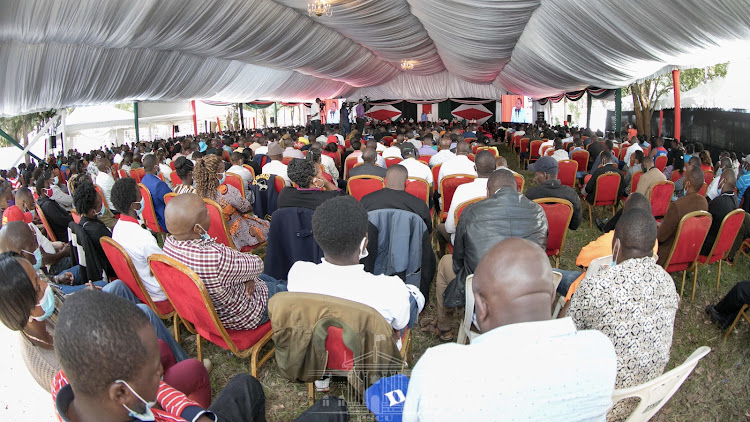 President Uhuru Kenyatta on Monday abruptly ended his four-day Mt Kenya visit amid claims that he failed to rally the region to support the BBI.

Uhuru landed at Sagana State Lodge in Nyeri county on Friday and held back-to-back meetings with leaders from the region.

He also used the meeting to tear into Deputy President William Ruto's hustler narrative as he stamped his foot as the region's political supremo.

The President was Monday scheduled to meet women groups, inspect government projects and address a series of roadside rallies.

However, this was put off at the last minute

State House spokesperson Kanze Dena on Monday morning announced that the engagement activities had been shelved and that the President will tour the region again next week.

“Consultative meetings between His Excellency President Uhuru Kenyatta, the clergy and women leaders from Central Kenya scheduled for today, Monday  February 1, 2021 at Sagana State Lodge have been postponed to next week due to unavoidable circumstances,” Kanze said in a press statement.

She added, “The new date and venue of the rescheduled meetings will be communicated in due course.”

It is not clear why Uhuru shelved his meetings.

However, Ruto allies have laughed off the President's efforts to sell the BBI agenda in the region.

Gatundu South MP Moses Kuria described the meeting as “a come-together of usual people who are supporters of the BBI.”

Kuria who spoke to the Star said there are pertinent issues the President should have sought to address but he instead choose to talk about sideshows.

“I looked around and I noticed that a huge number of the 3,000 people were the usual ones who attended the Bomas I and Bomas II meetings,” Kuria said.

The MP said if indeed the organisers wanted to have an impact with the meeting, they should have “invited the not converted people”.

“It was a therapy session. They were speaking to themselves,” he said.

Mathira MP Rigathi Gachagua said “the people of Mt Kenya will only listen to the campaigners of the BBI referendum if and when they have money in their pockets”.

“The President and his team came to campaign for BBI, something that is set to overburden taxpayers. The people of Mt Kenya have suffered economically under Uhuru regime with our businesses being destroyed under his watch,” Gachagua told the Star.

“The saddest part of it all is that any entrepreneur who is trying to progress is seen as a competitor and a threat to some businessmen who have captured the economy of this country.”

Kiharu MP Ndindi Nyoro took a swipe at the President for fanning violence.

“We have heard the President talking of the chaos that erupted at Githurai and Burma last week and he appears to be celebrating and encouraging the youth to opt for chaos. That is very wrong and we want people to sell their agenda without being intimidated. State instigated violence is primitive,” Nyoro said.

He said the quest to amend the 2010 Constitution through the BBI referendum is a fraud and contains a hidden agenda.

“We are vindicated. Sagana III was all about BBI nonsense and 2022 political lies and shenanigans and not about the economic welfare of area residents. Fortunately, our people won’t board. I don’t support Ruto but on BBI we are soulmates. It is no all the way,” Kabando tweeted.

Former Mandera Senator Billow Kerrow said the obsession with which Uhuru is pushing for the passage of BBI less than 20 months to his exit from office should worry Kenyans.

Kerrow alleged that Uhuru could be preparing to make a comeback as a prime minister, a position that has been proposed in BBI.

Belgut MP Nelson Koech said Treasury and the Office of the President should explain to Kenyans “where the Sh1 billion” used in mobilising and paying delegates to Sagana came from.

“We are aware that close to Sh1 billion was spent on paying the people who attended. The money cannot come from a private pocket but were taxpayers money. An explanation should be given and an an audit should be done,” Koech told the Star.