• This was supposed to be a sombre funeral for Abel Gongera, father to Kisii Deputy Governor Joash Maangi in Tendere. 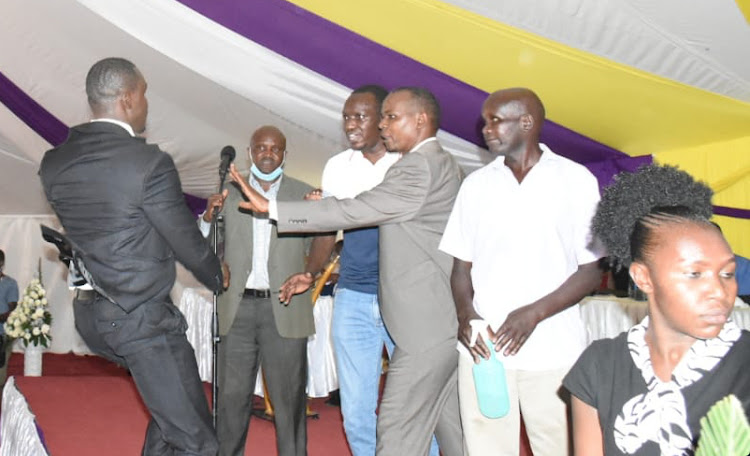 Heckling. Cheering. Jeering. Scuffles. Lectures to rivals. Chest thumping and shows of might.

This was supposed to be a sombre funeral for Abel Gongera, father to Kisii Deputy Governor Joash Maangi in Tendere.

The intolerance for divergent views that played out in Kisii on Monday, was witnessed last week in Githurai and was seen in Burma during separate visits by Ruto and Raila. It might yet be a precursor to what next year's campaigns might look like.

On Monday, the charged atmosphere was set off by Dagoretti North MP Simba Arati.

The ODM lawmaker in his speech told Ruto to apologise for the 2007 polls violence in which more than 1,000 people were killed across the country.

"Our people died a painful death in the post-election violence, you must come here and apologise publicly," Arati said. Many Kisiis in Rift Valley, a hot spot, were affected.

Ruto and six others, including President Uhuru Kenyatta were indicted by the International Criminal Court at the Hague. The cases collapsed after the duo became president and deputy.

At some point, South Mugirango MP Sylvanus Osoro jumped to the dais to try shove Arati off and stop him from speaking. A scuffle ensued and the two had to be separated by orderlies.

When he took to the podium, Ruto steered clear of the scuffles.

Ruto promised a paradigm shift in which the country's economy will be managed should he take power next year.

He said his government will focus on growing the economy of the poor as espoused by his hustler and wheelbarrow movements.

“If hustler movement has an enemy, it is poverty and lack of development which we must confront,” he said.

He told political foes off, saying they should concentrate on their wars.

Deputy President @WilliamsRuto dismisses those critising him for giving out wheelbarrows; says even graduates are involved in the 'Kazi Mtaani' projects. https://t.co/ljaKKJg4m3 pic.twitter.com/UWFFRQQmb5

He said the Kenyan youth no longer need empty political promises but sound programmes on how they can be empowered.

Ruto spoke of a need for a bottom-up approach in growing the country.

He said he will inject funds into the CDF that will assist in leveraging business startups.

On politics, he said he helped Raila and Uhuru before and there is no sin in him supporting the hustlers.

“Does it mean when I want the hustler, I become bad? Hiyo biashara tuachane bwana, (let's stop that nonsense),” Ruto said.

He wondered what difference there was between the ongoing Kazi Mtaani initiative employing youths to do menial jobs and his wheelbarrow model.

He also cautioned politicians against using youth for their political gain.

The DP did not respond to the demand by Arati to apologise for the 2007 post-election violence.

When he took the stage, Raila termed the wheelbarrow and hustler narratives as rubbish.

He said Building Bridges Initiative would iron out many of the problems the country has been grappling with for long.

Raila described Ruto's continued rejection of the report as unfortunate.

BBI, he said, was rooting for hi-tech development and the outdated narrative Ruto is pushing.

Raila said had it not been for the handshake between him and Uhuru, the country could have sunk into a Somali-like situation.

"Our ultimate aim then was to salvage the country, which was on the brink of war," Raila said.

And speaking at Daraja Mbili in downtown Kisii, Raila tore into Jubilee's development record saying it has failed.

He said many of the projects the government had promised have failed to start.

He told Ruto to stop running away from the failures of the government which he has been part.

In Ogembo, leaders among them Kisii Governor James Ongwae said the community has the numbers to play national politics.

"We have become of age now and I think it won't be wrong to demand our share of the national share in leadership," he said.

Ruto and Raila arrived a half an hour apart to a rousing welcome by jubilant supporters.

The arrival of the ODM party leader caused momentary disruption of the church service which was underway.

He was mobbed by boda boda riders and led to the tent at Tendere Primary.

Maangi, the sixth born in a family of eight, paid glowing tribute to their late father, describing him as a peace-loving man who was loved by all.

In a short speech, Maangi, a DP William Ruto supporter remained unapologetic for breaking away from ODM to work with Tangatanga faction of Jubilee.

He said there was nothing wrong for politicians to unite for the sake of the country.

"When you (Raila) decided to work with Uhuru, the country realised peace. If today you decide to work with Ruto, there would be nothing wrong," Maangi said.

He said he found Ruto a better choice to work with. Other MPs in attendance were Shadrack Mose and Joash Nyamoko.

Maangi said Kikuyus got more constituencies as goodies in the BBI proposals while Kisii got nothing.

"You cannot tell us to support you unless it benefits us as well, otherwise we will reject it in total," Osoro said.

He said if the government was able to bribe MCA's to pass the BBI then it has money to improve the welfare of each Kenyan.

Kitutu Chache South MP Richard Onyonka said the county has issues that must be addressed.

He said while he respects Ruto, Raila has fought many of the country's political struggles.

He said Kenya would only move forward if there are  genuine deliberate efforts by the political elite to to unite it.

Elders from Bomachoge church told Governor Ongwae to back their son Joash Maangi for governorship.

They said Maangi supported Ongwae to secure victory for two terms and it was time that he lent a hand too.