Why politicians are salivating over Mt Kenya voting bloc

Vote-rich area turned into battleground for outsiders seeking the presidency. 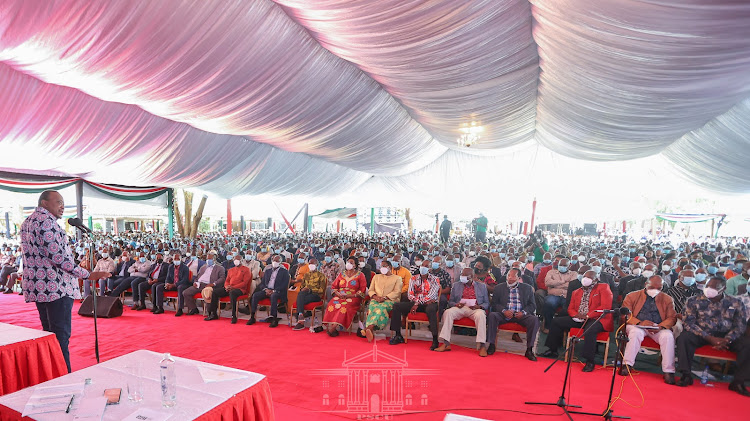 With the 2022 elections on the horizon, the Mt Kenya voting bloc is attracting more political interest than ever before since the advent of multiparty democracy.

The vote-rich area has turned into a battleground for outsiders seeking the presidency and for leaders from within who want to take over from President Uhuru Kenyatta as the region's kingpin.

Lack of a clear successor when Uhuru retires in 2022 is seen to have triggered a high-stakes game to control a population that decisively delivered victories during the 2013 and 2017 general elections.

With this in mind, politicians nursing presidential ambitions are banking on the region- Uhuru’s base- to catapult them to State House.

This could be the first time since 1992 that the region will not have one of their own as a strong candidate for the presidency.

And without a strong presidential hopeful, the plum prime minister's position proposed in the Constitution Amendment Bill 2020 is seen as the ultimate reward for the region in 2022.

During the 2017 elections, the region had a total of 5.3 million votes, some 31 per cent of the 19.6 million registered voters.

Pundits observe that the region feels let down by the Jubilee administration since the residents had very high hopes when they voted in 2017.

Loss of livelihoods, joblessness and poor returns from agriculture are some of the key problems residents want to be addressed.

Political analyst Daniel Orogo said presidential aspirants are attracted to Mt Kenya because the region will determine who wins the elections.

“The region has determined the political leadership of the country, historically. Mt Kenya has decided the presidency by either voting for or against the presidential candidates and that determines the success or the failure of the candidates,” he stated.

Orogo added that region could be a swing vote in the next polls, which makes it much needed for any candidate.

“While all other presidential candidates must, first of all, ensure they consolidate their own blocs, additional compact votes from Mt Kenya are additional and a springboard to ensure that one ascent to the presidency,” he said.

Kariuki Ngunjiri, a political commentator, said Mt Kenya region is experiencing the scramble to win it over because of its numerical and historical advantage.

“In every election since Independence the region has been a major factor, but more attractive in this one since there's likely not to be a presidential candidate,” he explained.

Ngunjiri said, however, there are those scrambling for the region to scatter and divide the vote it and perhaps create an opportunity for their numbers to work.

“Because once you kill the culture of Mt Kenya voting as a bloc, then there are some candidates who would rally their stronghold bases to record high voter turnouts,” he added.

Deputy President Ruto has visited the region countless times and has been in touch with a cross-section of its elected leaders.

He has also created a ‘hustler nation' narrative that appears to resonate with the masses in the region, resentful of elites and dynasties with their privileges.

The DP seems to enjoy near-fanatical following across the region. His rallies and roadside meetings are usually well attended, more than those of any other presidential hopeful.

Raila, Mudavadi and Kalonzo are proponents of the Building Bridges Initiative and have been drumming up support for the constitutional amendment as they try to win over the electorate.

The ODM leader has, however, insisted that he will only talk about 2022 after the BBI referendum.

Ironically, the ODM party has already invited people interested in flying its flag in 2022 to submit papers. It strongly suggests Raila will be on the ballot, even as he remains tight-lipped on the matter.

Ruto, on the other hand, recently said he will focus his energy on the implementation of government projects "because there is a lot of work to be done, I will focus on helping President Kenyatta on issues of development; others can drive the BBI agenda."

Mudavadi is positioning himself as Mt Kenya's safest pair of hands to succeed Uhuru.

In August last year, he assured Uhuru's backyard that they should not worry as he has no grudges.

He has built long-standing friendly ties with Mt Kenya people since he joined politics.

Lately, he has also been reaching out to Mt Kenya region to popularise the BBI and his 2022 candidature.

“Most businesses in Mt Kenya are being auctioned because the government has failed to manage the economy,” Mudavadi said in an interview with a Kikuyu FM station recently

Kalonzo has been also courting the region as he rallies it to support BBI. At the end of last year, he toured Laikipia and Nyeri counties. He opened a party office in Nyahururu town, Laikipia, and addressed residents at Sipii and Kinamba centres.

Nominated Senator Isaac Mwaura says Uhuru's promise to support Ruto in 2022 has worked in favour of the DP.

He added that Raila needs to work hard since the handshake has been perceived to have a political motive to sideline Ruto, in his favour, while Uhuru comes back as prime minister.