Raila, has of late found himself deserted by the once formidable Mt Kenya army

• The leaders who include MPs, senators and governors and former MPs have kept a distance from the former Prime Minister.

• The silent majority of Raila's troops are claiming  the President is not keen on opening gates to Mt Kenya for Raila. 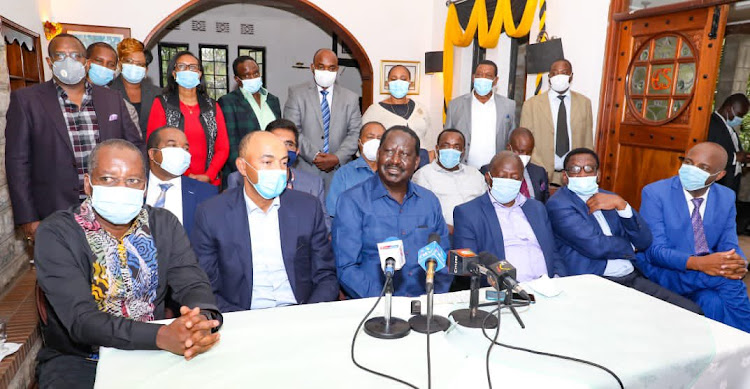 Allies of President Uhuru Kenyatta from Mount Kenya region seem to have vanished just when ODM leader Raila Odinga is trying to make headway in Central.

In recent engagements in the Presidents backyard, including the Wednesday Githurai rally that turned chaotic, Raila cut a lonely figure.

He was not joined by influential political leaders from the Kikuyu community to lend support and credibility.

The only man left standing is Nominated MP Maina Kamanda, a veteran city politician who has been aggressively marketing Raila’s presidential bid.

The other group that has openly endorsed Raila is the Kikuyu Council of Elders.

They have hosted Raila at the sacred Kikuyu shrine and made a historic visit to his Bondo home — seen as part of efforts to thaw the mistrust between the Luo and the Agikuyu since Independence.

This is the extreme opposite of the heroic reception Uhuru receives whenever he visits Nyanza, Raila's 'turf'.

In their letter to the President on Thursday, 41 MPs allied to Deputy President William Ruto claimed Uhuru is happier while in Kisumu but is “ill-tempered and abusive” on his own turf.

“We cannot help but contrast this with your demeanour in Kisumu, where you are a frequent visitor. In those tours, you are unfailingly cheerful and decorous, acknowledging, affirming and respecting the people and their leaders,” the lawmakers said.

There are concerns in ODM circles that President Kenyatta himself needs to take Raila to his people to completely defuse the animosity created in previous elections.

“It is a matter of concern that our colleagues never care to join us even when we are visiting them. Maybe they are not serious with these proposed constitutional amendments of which they are the major beneficiaries,” an ODM MP told the Star in confidence.

“Congratulations Senior Counsel James Orengo and Babu Owino for welcoming Baba to Githurai, that is the handshake at work,” Elegeyo Marakwet Senator Kipchumba Murkomen said in a sarcastic remark.

However, their Murang'a county backyard is among the regions in Central said to be hostile to the proposed BBI referendum pushed by Raila and Uhuru.

Political pundits warn that the move by Mt Kenya leaders to give Raila’s activities a wide berth would further entrench the mistrust the Agikuyu community has had against the ODM leader.

“Raila with only one Kikuyu man behind him and a legion of Luo legislators not in Luo Nyanza but in Mt Kenya region clearly tells you that some of these people have started to develop cold feet,” political analyst Danstan Omari told the Star.

He said Kiambu Governor James Nyoro should have accompanied Raila when he toured Githurai.

On Thursday morning, Murathe took to a vernacular radio station to persuade the Kikuyu to adopt Raila and allow him lead the country for five years.

Murathe said it was unfortunate for Kikuyu youth to be used to humiliate Raila and beat him like “a bag of beans”.

“If I would be asked, I'd like Kenyans to think about this man [Raila Odinga]. But we people attacked, beat this man like [a bag of ] beans and shamed him in Mt Kenya region. Let him be allowed to sit on this seat and use him to bring Kenya together,” he said.

If we are talking about paying debts and fulfilling promises, Murathe argued, the first debt that Kenyans should think about was between then Vice President Jaramogi Oginga and Kenya’s Founding Father Jomo Kenyatta.

“This is because Jaramogi had been given the mantle to be Prime Minister but he sacrificed because Kenyatta was in prison. Jaramogi said there is no independence without Kenyatta. 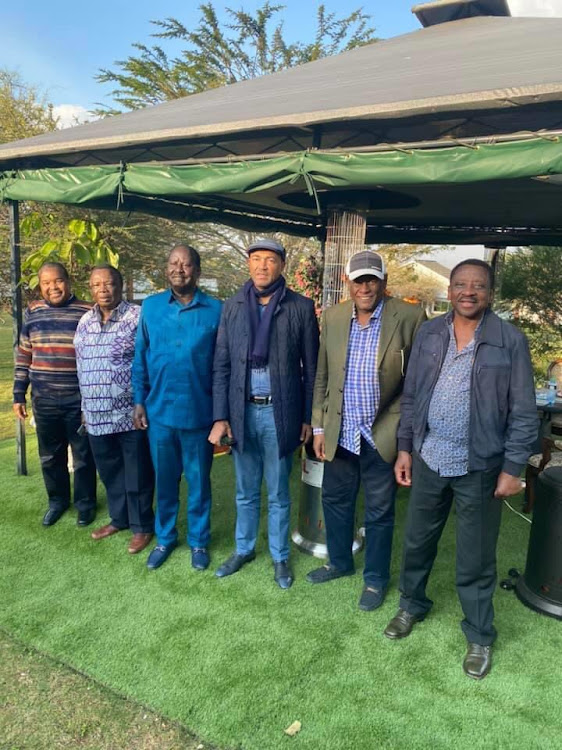 “These people have sacrificed the presidency for Kikuyus two times,” he stated.

“We are yet to get to the ground for meetings to campaign for the BBI. These are some of the things we will be discussing in Sagana on Saturday. People are just jumping the gun when they say we are missing in action," National Assembly Majority leader Amos Kimunya told the Star.

Kieni MP Kanini Kega also said he was not aware of the Githurai meeting and promised they will organise joint mega rallies to drum up support for BBI.

"No one invited me to the meeting. I didn’t know there was that kind of a function. We will organise for them proper meetings. This must have been hurriedly done," he said.

"I was not aware and just followed on social media. Going forward, we will have organised engagements with the people. They have to do more consultation. If we had a sitting, we would have been there," Kega said.

However, Ndaragwa MP Jeremiah Kioni told the Star he was approaching the venue of the rally in Githurai but was forced to turn back after rowdy youths started throwing stones.

“I was there, I only got there late but I was there. I was present when the youths started throwing stones,” Kioni said.

He was among two MPs who accompanied Raila to the sacred Kikuyu shrines a fortnight ago.

“It is extremely difficult not just to campaign for Raila in Mt Kenya but to be associated with him. Those who were running to his office are now deserting him, what is the reason? Because Mt Kenya is yet to embrace Raila,” he said.

He added, “We have challenged the leaders who are his point men in the region to bring Raila to Central and organise rallies in all the stadiums. I bet no one will turn out.”

ODM secretary general Edwin Sifuna denied existence of murmurs in the party, saying the Githurai tour was an ODM activity and had nothing to do with their partners.

“We are not concerned; these people are not members of ODM so when we ran our party programmes, we don’t insist on non members being part of the entourage,” Sifuna said.

“This is an ODM party programme, we cannot insist on having people who are not members of ODM there, if they find time to come they can come if they don’t want to come that is their own choice.”

Addressing a packed crowd at Githurai market, Kamanda praised the handshake between Uhuru and Raila and declared he will remain their number one supporter.

“You know me. When you see me here, you see Raila and Uhuru. Some people were saying that we cannot be welcomed here, I am happy that Raila has been given a heroic welcome,” Kamanda said.

How Githurai violence was planned

Goons given Sh500 to cause chaos according to intelligence reports.
News
4 months ago

Said Uhuru is still the Mount Kenya kingpin and the spokesperson
Counties
1 year ago
by GIDEON KETER AND LUKE AWICH
News
29 January 2021 - 07:14