• Raw sewage and industrial waste has flowed into the lake for years, the situation worsened after Rift Valley lakes started flooding six months ago.

• Fish from Lake Nakuru is said to start rotting in three hours, the Agriculture ministry directed the county to conduct studies into the problem. 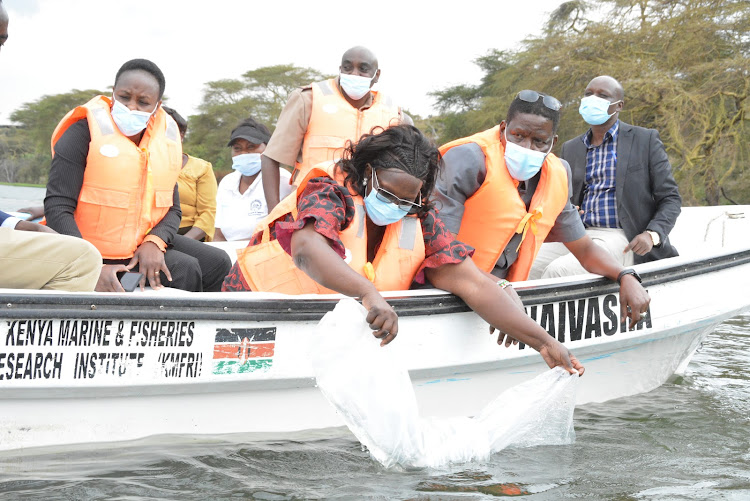 Tilapia and other fish from Lake Nakuru are poisonous and unfit for human consumption.

That's what the Kenya Marine and Fisheries Research Institute (Kemfri) declared on Tuesday.

Barely three months after fishing in the lake started, the research institute said consumption of Nakuru fish will have serious health effects on consumers. Fishing has been declared illegal.

The Ministry of Agriculture has directed the Nakuru county government  to conduct studies following reports that the fish started rotting three hours after they were caught.

For years, sewage and industrial waste has been flowing into the lake.

She said the ministry had received the reports on contamination from the research institute and said the responsibility now lies with the county government.

“The report from Kemfri confirms that fish from Lake Nakuru is unfit for human consumption and it may cause diseases in the future,” she said.

Kilimo was speaking after leading a restocking of Lake Naivasha with more than 100,000 fingerlings donated by the ministry.

During the exercise, illegal, small-mesh nets were burnt. Overfishing, illegal fishing and water hyacinths are major concerns, she said, as well as human activities too close to the lake.

“During Covid-19 pandemic, many people lost their jobs and they turned to the lake leading to an increase in illegal fishing which has adversely affected the fisheries sector,” she said.

The CAS noted that the government was keen to second the Kenya Coast Guards to the lake to stop illegal fishing, seize unsafe boats and stop smuggling.

“Over 15 people have lost their lives while illegally fishing in the lake and it's time that we stopped these illegal cases by increasing patrols,” she said.

The CAS added that the government was keen to support the fisheries sector that employs thousands of people.

She said the county made over Sh300 million from fish last year, hoping it will increase to Sh1 billion this year, despite illegal fishing.

“We have already restocked Lake Solai and all fishing ponds in the county with fingerlings as one way of increasing fish production and revenue,” she said.