Philip Murgor: Why I'm the best successor to Maraga

• He believes these are the areas where Maraga failed. The retired CJ's term was marked largely by vicious acrimony with President Uhuru Kenyatta-led Executive.

• Murgor gives Maraga a score of 65 per cent. He believes the retired CJ scored fairly good at maintaining the rule of law and constitutionalism. 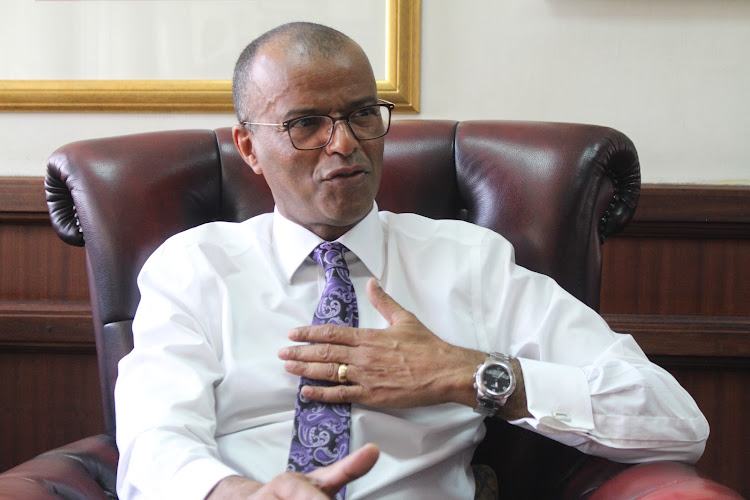 Senior Counsel Philip Murgor during an interview in his office in Naiorbi on Thursday, January 21, 2021
Image: ANDREW KASUKU

The name of former Director of Public Prosecutions Philip Murgor has been mentioned among frontrunners to succeed retired Chief Justice David Maraga.

Murgor believes he is the best candidate to take over from where Maraga left.

Why does he want to head the Judiciary?

To negotiate, to talk with not at and to provide firm leadership. These are the inputs Murgor says he will bring to the table.

He believes these are the areas where Maraga failed. The retired CJ's term was marked largely by a vicious acrimony with President Uhuru Kenyatta-led Executive.

Murgor gives Maraga a score of 65 per cent. He believes the retired CJ scored fairly good at maintaining the rule of law and constitutionalism.

Maraga often complained publicly about a meagre budget and the President's failure to appoint Court of Appeal judges to help clear the backlog of cases.

Murgor however says the government is grappling with a hostile economic environment among many other pressures. As such, he says, Maraga ought to have been diplomatic in reaching out to the Executive.

“I think Maraga lacked diplomatic skills in his leadership. Addressing the press to castigate and impute improper motive on the part of the duty bearers in government cut the leverages that he may have had to get things done," he said.

Admitted to the bar in 1986, Murgor recently rose to the rank of senior counsel. The 60-year-old father of three is married to Court of Appeal judge Agnes Murgor.

He told the Star that should he succeed in his bid to become the third Chief Justice under the 2010 Constitution, he will adopt budget cuts.

“First, everybody and anybody knows that the country has been experiencing economic hardship for over two years now. As the CJ, I would start by appreciating this fact and inculcate it in my planning,” Murgor said.

“Getting budgetary allocation requires negotiation and dialogue, not grandstanding.”

On the matter of the 41 judges whose appointment has been approved by the Judicial Service Commission but stone-walled by the President, Murgor says he would go for a compromise rather than public agitation.

For example, he said, instead of insisting that all the judges be sworn in, he would negotiate with the President to have it staggered, so that those with the alleged integrity questions are alienated from those whose names are clear.

“This is compromise. You say, if I can’t get the whole thing because of whatever reason, then lets start with the less contentious ones,” he said.

Murgor, however, said not only the CJ should carry the blame. "The representatives of the Executive on the JSC, including the Attorney General failed."

“The AG Paul Kihara represents the Executive. He ought to have let the JSC in on the issues. But even larger than that, he should have led the negotiation efforts to develop a common ground.”

The apparent refusal by Uhuru to appoint and swear-in the judges after their recruitment by the JSC formed a central part of the tiff between Maraga and the Executive.

Barely a week after his retirement, Maraga called for the impeachment of the President for what he considered a gross violation of the Constitution in refusing to appoint the judges.

Murgor says most of the court orders allegedly ignored by the state were still subject of litigation and appeals.

"The fact that you can sit here and do the interview, media operating freely and speech is not restricted, is enough testament of our democracy," he said.

Murgor said he learnt the centrality of dialogue in getting things moving through the government bureaucracy when he served as the Director of Public Prosecutions.

He was the DPP between 2003 and 2005 when his tenure was terminated by President Mwai Kibaki. At the time, he was handling high profile corruption cases, including the Anglo-Leasing scandal.

He believes his dismissal was aimed at stopping him from pressing hard.

Murgor remains proud of his anti-graft credentials. He believes it was because of his integrity that the Kibaki administration hired him to serve as the DPP even though he had served as part of President Daniel Moi's legal team in the 1992 elections.

He says he moved on from the sacking. But two things remain; integrity and fair administration of justice.

CORRUPTION IN THE JUDICIARY

Should a CJ Murgor receive a call from a high-ranking Executive official or power brokers to decide a matter  - including a presidential election petition - in one way or another, he will politely decline.

"If you are amenable to phone calls, then you will receive them. I'm not amenable to influence and doing others' bidding. That's why I got sacked as DPP," he said.

Regarding corruption in the judiciary, Murgor believes the system is riddled with systemic graft but that "a majority of sector players including judges and public servants are of high integrity and are not corrupt."

He said corruption in the corridors of justice is perpetuated by advocates who have formed cartels through which they intimidate judges and extract orders that they want.

"These lawyers are well-known," he said, without giving names. To deal with them, he said, he would focus on implementing policies that smoke out the corrupt and ensure that only judges of integrity serve.

He said ensuring that adequate judges are hired will help reduce backlog. Implementation of the  performance contract management mechanism introduced by Maraga will also help. Technology would also form the bulk of this strategy.

"The Judiciary is one of the most efficient public institutions, thanks to the efforts by retired chief justices Maraga and [Willy] Mutunga," he said.

Making it even better does not require any new invention. "Mutunga brought one of the most brilliant reforms. My work would be to follow them through and implement them to the letter."

Murgor says he would also strive to make the JSC efficient in processing and dispensing with complaints against judges.

"But most of the complaints against judges tend to be by losing litigants. But an efficient JSC would ensure such cases are dealt with quickly," he said.

Ask to weigh in on the ongoing hostilities at the Law Society of Kenya, Murgor thinks the problem is with the leadership and that urgent steps were required to restore sanity at the outfit.

Every sober lawyer is crest-fallen, he said, their heads down in shame at the conduct of the society's leadership.

"The recent SGM where the one who could shout and abuse the loudest had their way was quite an embarrassment," Murgor said.

The January 18 SGM presided over by president Nelson Havi was chaotic with tempers flaring. It was largely shambolic.

It resulted in the suspension of eight council members but there are contestations as to whether the eight or the entire council membership were voted out of office.

"My understanding is that the motion to suspend the eight was amended to include all of them. We have a mad president in Havi, who thinks he is law unto himself," Murgor said.