President says BBI is not linked to him supporting any individual for 2022 elections.

• The President said that the problem facing BBI was that the perception created was that BBI was about supporting one person and undermining another.

• Uhuru is known to retreat to his backyard either in person or on vernacular radio whenever he wants to directly address that constituency. 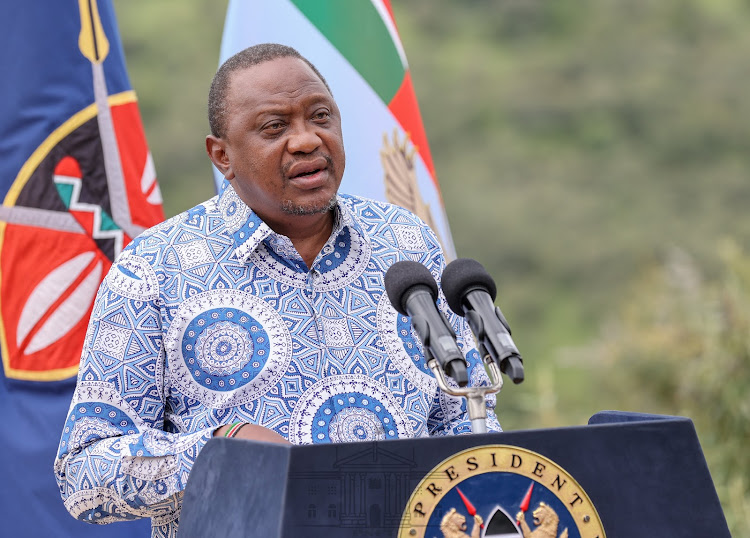 President Uhuru Kenyatta at a past press conference
Image: PSCU

The President said that the problem facing BBI was that the perception created by BBI was about supporting one person and undermining another.

"I have never said that this is about supporting this person or undermining this other one. My goal is towards peace, unity and the prosperity of the country," Uhuru said.

He added; "My greatest worry is that politicians are focused on the 2022 elections instead of focusing on the issues facing Kenyans."

The President clarified that he has never said that he supports ODM leader Raila Odinga or any other person related to the handshake.

The President also took a blow on Deputy President William Ruto saying that even when he goes out there, he makes claim to the things that the government has done.

"People ask what the government is doing. But even those who are going around the country, what do they do when on those cars? They talk about the roads, electricity and water as part of the achievements of the government," Uhuru said.

The President was speaking on Kikuyu vernacular stations in an interview that was recorded on Sunday afternoon.

Uhuru is known to retreat to his backyard either in person or on vernacular radio whenever he wants to directly address that constituency.

The President also dismissed claims that the BBI referendum would cost billions of shillings that can go elsewhere.

"We are not even there yet. The verification of the signatures has not even been completed and the Bill is yet to get the county assemblies. And even when they talk about Sh2 billion, that is the same amount of money they are stealing daily," Uhuru said.

The President also took the time to revisit the events leading to the handshake after the 2017 elections.

He said that he made the sacrifice because Kenya is more important than any individual.

"I, therefore, decided to look for our competitors and I told those who we had been elected with my intentions with the sole aim of ensuring we do not have chaos after future elections," Uhuru said.

Uhuru said that following their discussions with ODM leader Raila Odinga, they identified inclusivity as the main issue that needed to be dealt with.

He added that the other issue they identified was underrepresentation which was undermining the equitable distribution of resources.

Uhuru added that the issue of unemployment was also key to the handshake and thus the proposal for the tax holiday for youth firms.

"If we empower the youth through businesses and tax breaks, we will have nibbed a problem in the bud. Let us focus on what will protect you, your children and your children's children. I am not forcing you to be with me but don't trust anyone blindly," Uhuru said.