Rangers blame authorities for secrecy and mistrust in stimulus package

Since Covid-19 broke out, camps in conservancies have closed and staff have gone on unpaid leave

• Rangers who separately talked with the Star said the programme is shrouded in secrecy.

• A ranger working at a conservancy bordering Tsavo West National Park said the wait has been long. 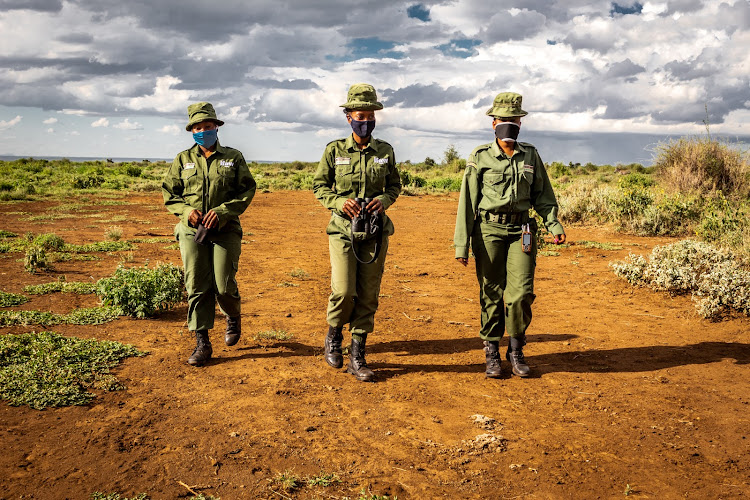 A file photo of community rangers.

President Uhuru Kenyatta's bid to cushion community rangers in private and community conservancies from Covid-19 effects has been marred by secrecy and mistrust.

Rangers who separately talked with the Star said the programme is shrouded in secrecy.

A ranger working at a conservancy bordering Tsavo West National Park said the wait has been long.

"We gave our details but they were brought back, with authorities saying we needed to confirm them. We have confirmed but nothing is forthcoming," the ranger who sought anonymity said.

The situation is replicated in conservancies in Taita Taveta.

A ranger in a conservancy in Lamu also decried the wait.

"We are just surviving hoping authorities will pay us soon," he anonymously said, fearing reprisal.

President Kenyatta unveiled a Sh53.7 billion eight-point economic stimulus package to alleviate the effects of coronavirus pandemic on the economy on May 23, 2020.

In the package, the tourism and wildlife sector received Sh5 billion to provide soft loans for the refurbishment of the tourism facilities through the Tourism Finance Corporation.

In July last year, Tourism CS Najib Balala announced that Sh1 billion will be used to pay salaries of 3,500 community rangers in private and community conservancies.

Balala said the government had allocated the amount to support rangers working outside KWS to mitigate the economic impacts of the pandemic.

“The money will go towards paying salaries for rangers in 160 conservancies that is outside KWS managed parks and game reserves. We are targeting 3,500 rangers whose salaries will be paid for one year,” Balala said.

The CS said the rangers would be supported in salaries for the next one year because the pandemic has depleted private conservancies’ revenues due to a lack of tourism.

National parks and game reserves receive funding from the government to support operations unlike conservancies that rely on tourism.

Since the pandemic broke out, the majority of the camps in conservancies have closed and staff have gone on unpaid leave uncertain of their jobs as investors work to survive an estimated loss of between $217 million and $392 million.

Due to lack of funds, the Kenya Wildlife Conservancies Association started working with the Ministry of Tourism and KWS to develop the disbursement procedure, accountability requirements and reporting on the support fund.

KWCA embarked on collecting information from conservancy rangers for enlisting to benefit from the one-year programme.

The ministry directly disbursed the funds to conservancy rangers.

The conservancies were provided with a guide that provided a brief on the funds and disbursement measures.

On December 22, 2020, KWCA boss Dickson Kaelo wrote to members, saying the association could not share the update earlier due to "the sensitivity and complexity of government procedures."

"We are pleased that about 2,850 rangers have already received their part salaries through rangers' bank account and M-Pesa."

A total of Sh18,000 was allocated per ranger with a net pay of Sh17,200 disbursed by KWS. Statutory deductions of Sh800, NHIF (Sh500) and NSSF (Sh300). KWS will request conservancy managers to share NHIF/NSSF numbers to remit deductions," Kaelo said.

Kaelo said about 100 rangers had their salaries bounce due to inactive accounts and errors in account numbers.

Some 550 rangers could not be paid due to absence of bank accounts, accounts with Saccos, among other reasons.

Kaelo said verification was ongoing to sort out the errors and communication is on the way to respective conservancies to counter check bank details.

He asked conservancies to be patient saying they expect a smooth process on future payments.

Tourism PS Fred Segor neither picked our calls nor responded to our text messages on the matter.

He said the Trust will be designed to provide sustainable finance to conservancies during and post Covid-19 recovery.

Kaelo said a list of 4,019 conservancy rangers were submitted to the association by 154 conservancies, exceeding the approved 3,500 rangers.

•The Government should ease its taxation of the sector by repealing both the tourism and catering levy and other charges that impact the tourism ...
Business
1 year ago
by GILBERT KOECH News Reporter
News
18 January 2021 - 23:00