Leaders at La Mada Hotel meeting seized of concerns Uhuru's regime is not popular in the region.

• Committee formed to lay down plans for the tea, coffee, milk, and horticulture industry in a bid to boost farmer’s returns.

• Meeting also discussed on how to approach the BBI issue following the letter by Senate Majority Whip Irungu Kang'ata. 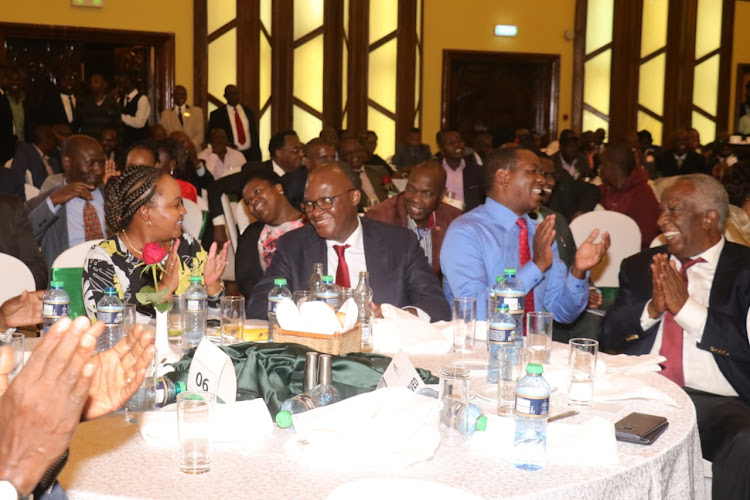 Some of the pro-Uhuru politicians from Mt Kenya region during a dinner at Safari Park Hotel on February 25, 2020.
Image: COURTESY

Senior government officials from Mt Kenya on Friday held a private consultative meeting a Nairobi hotel to chart development plans for the region.

It was co-chaired by his Agriculture counterpart Peter Munya and Interior PS Karanja Kibicho.

Munya on Friday posted on Twitter; "This Morning I Chaired a very successful breakfast meeting of senior government officials from Mt. Kenya region and it's diaspora at Lamanda Hotel Nairobi."

They resolved to form a committee led by the two co-chairs to discuss economic empowerment of the Mt Kenya people through agriculture.

The team will lay down plans for the tea, coffee, milk, and horticulture industry in a bid to boost farmer’s returns.

Sources at the meeting intimated to the Star that the committee would also chart the way forward for the region, including their preferred presidential candidate for 2022.

An attendee said the deliberations followed the ‘emerging political concerns in the region.’

“We are going flat out to deal with the cries of our people which we are seized of, especially farmers. As the government, we believe a lot has been done but there is still more to go,” the state official said.

The team also discussed the Building Bridges Initiative (BBI) and how to engage Mt Kenya on the document.

There is talk that President Uhuru Kenyatta may have lost his grip of the region to the growing hustler wave championed by his deputy William Ruto.

Another official who attended the meeting said that it was important for them to find a better approach to sell BBI in the region.

"We evaluated the letter by Kang'ata and we find merit in it. We cannot fail the president and therefore, it is important that we handle this matter effectively and efficiently," the official said.

Senator Irungu Kang’ata alluded to this in his recent terse letter to the President warning that the BBI was bound to be defeated in the region.

He said that there was a general feeling of economic deprivation at household levels in the region, adding that it gave fodder to anti-BBI forces.

“It appears households incomes have either stagnated or plummeted. Many have blamed the stagnating of tea, coffee and milk prices on the government and thus argue BBI is less of their concern,” Kang’ata wrote.