In the case, Mitubell Welfare Society challenged their eviction by Kenya Airports Authority.

• The residents of Mitumba village had argued that they were illegally evicted from their place of residence.

• Lawyers for the victims welcomed the ruling. 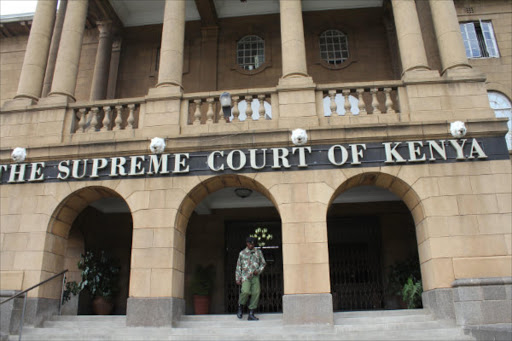 More than 3,000 families who were wrongfully evicted from the famous Mitumba village near Wilson Airport got relief after the Supreme Court ordered that they be compensated.

In a judgment delivered via email, the apex court directed that the matter be taken back to the High Court, which will determine how much they will be paid.

“These proceedings are hereby remitted to the trial court, with instructions that appropriate reliefs be crafted and granted in accordance,” the judgment reads.

In the case, Mitubell Welfare Society challenged their eviction by the Kenya Airports Authority in 2011.

The court noted that the eviction violated a court order. It also noted that during that eviction, residents' properties were destroyed.

“This court cannot close its eyes to these uncontroverted findings on record. Actions by state organs, carried out in flagrant disregard for court orders, do undermine our constitutional order, more so if they result in the violation of citizens’ rights,” the court ruled.

However, it declined to give them orders requiring the state to furnish the trial court with current state policies and programmes on provision of shelter and access to housing. The judges ruled that such orders ought not to have involved non- state actors, who were not parties to the suit.

“To the contrary, we are of the considered opinion that where the landless occupy public land and establish homes thereon, they acquire not title to the land but a protectable right to housing over the same,” the court ruled.

The judges further ruled that the right to housing over public land crystallises by virtue of a long period of occupation by people who have established homes and raised families on the land.

“This right derives from the principle of equitable access to land under Article 60 (1) (a) of the Constitution. Faced with an eviction on grounds of public interest, such potential evictees have a right to petition the Court for protection,” the court held.

It was their opinion that the protection need not necessarily be in the form of an order restraining the state agency from evicting the occupants, given the fact that the eviction may be entirely justifiable in the public interest.

Lawyers for the victims welcomed the ruling. "This is a big win for the right to housing and freedom from forced evictions in Kenya," said Ochiel Dudley, one of the advocates for Mitubell.