Nurses who succumb to Covid to receive compensation

Risk allowance for nurses to be reviewed to a minimum of Sh15,000.

• The Kenya National Union of Nurses SG Seth Panyako asked all striking nurses to stay put until the agreed Return To Work Formula before the labour CS is signed by all parties. 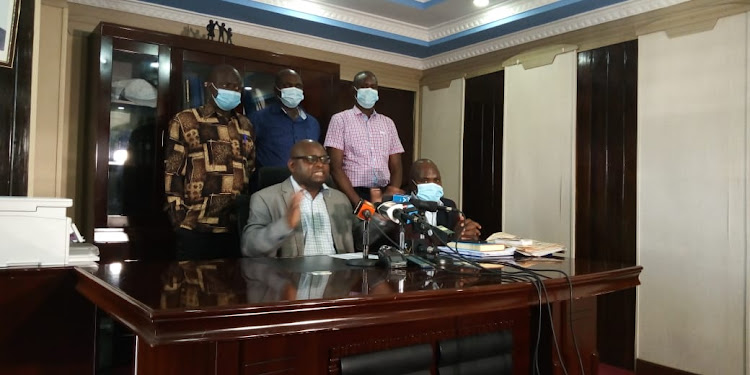 The Kenya National Union of Nurses SG Seth Panyako addresses the press at the union offices in Nairobi on January 8, 2020
Image: MAGDALINE SAYA

Nurses who have or may succumb to Covid-19 and other illnesses shall receive compensation should the return to work formula agreed upon by the union and the government is signed.

During the negotiations between the parties which commenced under the multi-agency standing committee at the Labour ministry, it was also agreed that the risk allowance for nurses is reviewed to a minimum of Sh15,000.

It was further agreed that all nurses who have been hospitalized and have paid their own bills due to the absence of comprehensive medical insurance cover shall be refunded the funds they spent on treatment by employers within the two levels of government.

The Kenya National Union of Nurses Secretary General Seth Panyako has asked all striking nurses to stay put until the agreed Return To Work Formula before Labour CS Simon Chelugui is signed by all parties.

It's back to square one as clinicians strike again

Speaking in Nairobi on Friday, Panyako said the two levels of government agreed on all items as contained in the draft agreement.

He said that despite the national government pledging to fund the RTWF agreed upon, the CoG has refused to sign it arguing that they were not consulted.

"The union is waiting for the meeting of the two levels of government on Monday in order to hasten the signing of the RTWF," Panyako said.

"The CoG has refused to sign the RTWF arguing that they were not consulted during the negotiations which we differ because the CoG secretariat has always attended the meetings."

Nurses have been on strike since December 7 to push for among other issues a risk allowance, adequate personal protective equipment, comprehensive medical insurance cover and delayed salaries.

To date, 34 nurses have succumbed to Covid-19 while on duty.

Patients in the country have continued to feel the heat of the strike as lab technologists and clinical officers also joined in the strike this week.

The clinicians went back on strike after failing to reach an agreement with the CoG on their return to work agreement signing.