President's men fear that Senator Kang'ata could be bidding for those opposed to the BBI.

• There is a feeling in the ODM camp that President Kenyatta might not be fully committed to the BBI and that Raila could be abandoned.

• DP’s people say the success of the referendum in Mt Kenya will depend on the character of the people selling the document. 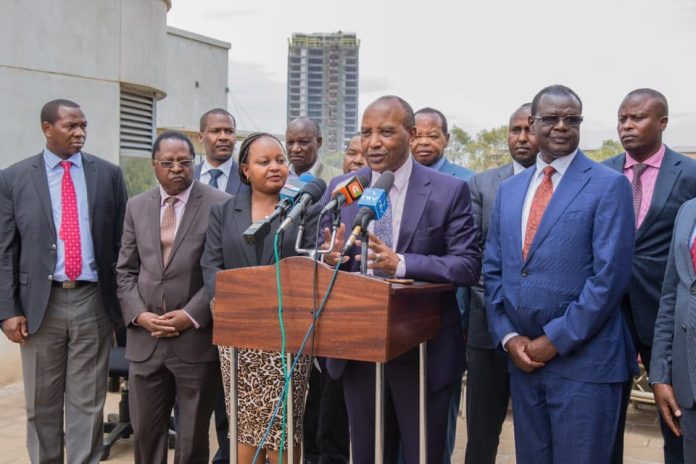 Uhuru’s allies have claimed Deputy President William Ruto is the hand behind the political turmoil—including the letter by Senate Majority Whip Irungu Kang'ata in which he warned that the proposed BBI referendum faces "spectacular defeat" in the region.

But the letter has also triggered political suspicion in Raila’s camp that it could be testing ground by some influential individuals to completely abandon the BBI process.

On Monday, however, Kang'ata was disowned by powerful Mt Kenya leaders, including the region's 10 governors.

National Assembly Majority leader Amos Kimunya trashed Kang'ata’s move as “careless and immature” and alleged it’s a plot by the Ruto political axis to turn the tide against the BBI.

“If you read the letter, it is what has been the position of Karen [Ruto's official residence] on the BBI. I even doubt whether the senator is the sole author of the letter,” the Kipipiri MP told the Star.

“I wouldn’t want to judge him, but his actions and content of letter seem to be an extension of Karen. That was a very careless attempt to attract attention of the boss by purporting to write a letter to him and copying it to the media. That is totally immature.”

The feeling in the Kenyatta camp is that Kang’ata could be preparing to follow nominated Senator Isaac Mwaura to the Ruto camp.

Mwaura, a vocal legislator, recently defected to Tangatanga and viciously attacked the Kenyatta and Moi families for holding onto power for more than 50 years.

On January 2, Kandara MP Alice Wahome launched a scathing attack on Uhuru and dismissed him as a failed president.

In his letter that is music to the Ruto camp, Kang'ata said the BBI is unpopular and has approximately 10 per cent support in Mt Kenya.

He also wants no use of provincial administrators, a multiple-question referendum and Jubilee to bend backwards in dealing with rebels.

A multiple-question referendum has been one of Ruto’s key demands.

There are questions as to why Kang'ata, a connected lawmaker in the Jubilee ranks, chose to address the President through an open letter and not through official channels.

Weeks before the BBI signatures were handed to the IEBC, Kang'ata was purportedly leading the Uhuru faction for a consensus with the Ruto axis on contentious BBI proposals.

Ndaragwa MP Jeremiah Kioni told the Star that Kang'ata’s move is “tactics of a person on the brink of defection.”

“He is looking for a reason to defect to Tangatanga. As the Majority Whip, he has access to the President 24/7, hence has no justification for what he did,” Kioni said.

“Such behaviour is in keeping with a weak person. I am disappointed with such an approach. He is quick to look at why the BBI should fail. We even think it may have been a mistake to pick him Senate whip,” the MP said.

“When as general you are the first one to throw in the towel and punch holes on the balloon, that is betrayal, not even dishonesty, of the ordinary Kenyans.”

“There would be no political significance [of his survey] if there are questions over methodology, sample size and validity of the study results,” he told the Star.

Following the development, there is a feeling in ODM camp that President Kenyatta might not be fully committed to the BBI and that Raila could be abandoned.

Homa Bay MP Peter Kaluma, in a tweet that he hurriedly deleted, sounded the alarm of imminent betrayal. He said the letter was not the senator’s “handwriting”.

“We are not welded to anyone. Let no one blackmail us! We've seen it all. We're suicidal. We'll be Solomon if you play wise with us; we can be Samson if you play games with us,” read the tweet, which the lawmaker later claimed was about the 2022 Homa Bay governor race.

When contacted, he said: “We are with Uhuru to the end. Once you make your bed, you must lie in it.”

Even so, fears abound that Kang’ata is no ordinary leader to author such a letter and circulate it to that extent.

“If you see such a letter, the next thing they will say is that they [Mt Kenya] have listened to the voice of the people and have thus decided to shelve the BBI process,” a high-ranking ODM member told the Star in confidence.

But 10 Mt Kenya governors in a press statement termed the senator's remarks as “irresponsible, cheap and populist”.

“To intimate that the Mt Kenya region is opposed to the document at this stage is not only preposterous but also a serious misrepresentation of facts and reality and, we repeat, very premature,” they said.

The governors want the top Jubilee leadership to coordinate the BBI political actors. They said Kang'ata’s statement should be deemed as personal and based on personal prejudices.

“Kang'ata should have followed official government structures in his address to the President. Such breach of protocol is unacceptable. It raises questions why a senior member of the government leadership in Parliament would choose this cheap populist method to address this issue.”

ODM political affairs secretary Opiyo Wandayi described the move as one that is “unhealthy from a political perspective”.

“I suppose if the advisory is genuine or authentic, it should have been confidential and the President would be the one to choose whether to share it with other people or not.

“The issues raised could be pertinent but the manner they are presented raises more questions than answers,” the Ugunja MP said.

But Ruto allies came to Kang'ata’s defence, with Nyeri Deputy Governor Caroline Karugu saying the senator was only reporting his survey findings.

“Some not too smart folks are fighting him. Like the proverbial ostrich, they remain dead to the realities on the ground,” she said.

Soy MP Caleb Kositany said in a tweet: “This (the letter) is most welcome. I just hope Hon Kang'ata is not in trouble.”

The DP’s people say the success of the referendum in Mt Kenya will depend on the character of the people selling the document.

But the BBI proponents, in terms of whether Central supports BBI or not, hold that they have been on the ground and know there are people who support the process.