They say current provisions do not give solemnity to the process

• Currently, there is no stand-alone laws that provides for the procedure for removing an impeached governor.

• The procedure for removal of a governor is provided for in Section 33 of the County Governments Act, 2012. 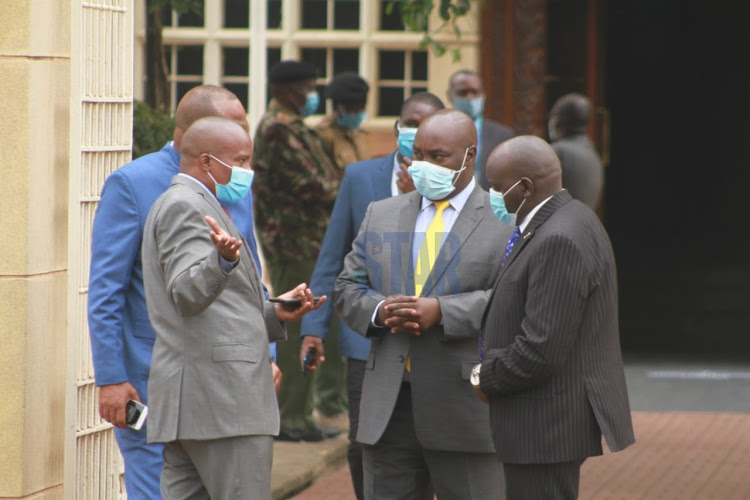 Senators outside the chambers after the Senate was adjourned on Monday, August 17, 2020
Image: EZEKIEL AMINGA

Senators are pushing for the enactment of a law to guide the trial process for governors impeached by their county assemblies.

The lawmakers said the current provisions do not give the ‘solemnity’ to the trial of impeached governors as they are rigid and do not give them enough time to hear the cases.

They spoke during the hearing of former Nairobi Governor Mike Sonko’s removal confirmation in the Senate. Senators confirmed Sonko's impeachment and removed him from office on Thursday night.

“We must revise these rules. We must look at the Act again. My belief is that, so far, we have not given the solemnity to this process,” Minority leader James Orengo said.

Currently, there is no standalone law that provides for the procedure of removing an impeached governor from office.

Instead, the procedure is provided for in Section 33 of the County Governments Act, 2012.

The section states that the Senate shall hear the impeachment charges and arguments in plenary or through a committee of 11 members.

For a committee, the law gives the panel 10 days within which to hear a case and report its verdict back to the House on whether it finds the particulars of the allegations against the governor to have been substantiated.

In the case of the plenary, the House has a maximum of two days to determine the case.

Sonko’s case was heard and determined in the plenary after Majority leader Samuel Poghisio declined to move a motion to debate the formation of a committee.

“I believe that we must revise the rules, amend the County Government Act in relation to the impeachment. I want to persuade the House that a committee process is probably better,” Orengo said.

He added, “In the USA, they do not have a provision for the committee system. What they have in the law is plenary but they have found out over time that plenary does not do justice to the grounds and the seriousness of grounds.”

Kiambu Senator Kimani Wamatangi reiterated the need to re-address the procedure of impeachment.

He expressed fears that the House risks compromising a very important tenet and virtue of the process – believability.

“If these processes continue then eventually it is clear to somebody who is following that we are not able to prosecute the matter to its detail because of lack of time,” he said.

Nominated Senator Isaac Mwaura said the current provisions are not succinct as they leave it to the whims of the members to decide the route to use to confirm a governor's removal.

“We really need an impeachment procedure law, so that we are very clear that it is not whimsically possible to just make a determination as to whether we have a case for a plenary or for the committee based on what may have happened by a certain committee or certain persuasions of the moment,” he said.

“It is important that in the eyes of anybody who comes before us to see that not only has he or she been subjected to a process that is fair, but that he or she has also received justice,” he said.