You will be sacked- Kagwe tells striking health workers

Kagwe said the courts had stopped the strike to allow room for negotiations.

• Kagwe said the courts had stopped the strike to allow room for negotiations noting that the government has continually engaged health workers’ unions over the issues raised.

• Kagwe said as amicable solutions to the issues are sought, the health workers need to go back to work especially as Kenyans indulge in the festivities. 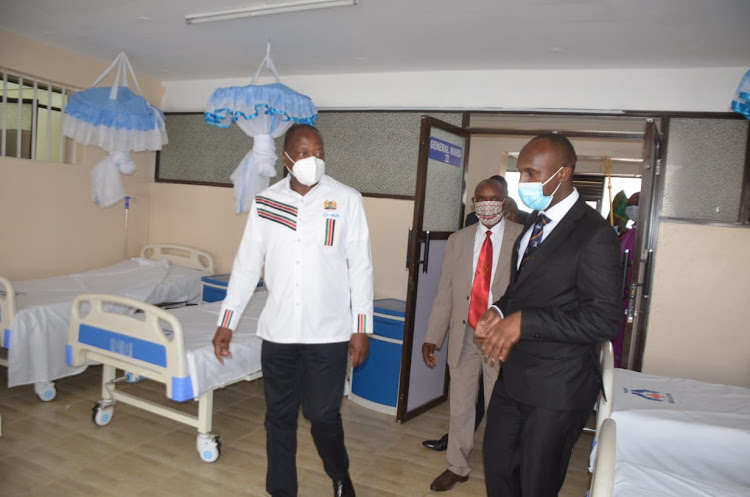 Health Cabinet Secretary Mutahi Kagwe during the commissioning of Santamore Surgical Hospital at Kenol with Mwangi Chege (right), one of the directors.
Image: ALICE WAITHERA

Health Cabinet Secretary Mutahi Kagwe has sounded a warning to striking health workers to resume work or face the sack.

Kagwe said the courts had stopped the strike to allow room for negotiations noting that the government has continually engaged health workers’ unions over the issues raised.

Kagwe said as amicable solutions to the issues are sought, the health workers need to go back to work especially as Kenyans indulge in the festivities.

"I can confirm that my Ministry and that of Labour and Social Protection continues to engage with union officials to find an amicable solution to the issues that concern their members. Kenyans can now enjoy their holidays without anxiety and fear of seeking unavailable services in our public facilities as it should be," he said.

Some of the issues they have raised, he said, are legitimate and that the government has put in place measures to ensure they are resolved.

He cited the issue of Personal Protective Equipment that health workers demanded saying they have been provided to all private and public health care facilities.

“And that is why we are asking all striking health workers to go back to their work stations all the country and avoid being a statistic of the people who will be looking for jobs come January,” Kagwe said.

Kagwe said this while launching Santamore Surgical Hospital at Kenol in Murang’a County on Friday that has been established by a group of five doctors.

Kagwe said the facility located at the gateway of the Mt. Kenya region will cater to the high number of victims of road accidents that occur along the roads in the region.

“This is a good case of the private sector identifying an opportunity and running with it. Numerous deaths and paralysis arising from accidents would not occur if the victims received urgent emergency care,” he said.

Such facilities, Kagwe said, complement the services given by public facilities and are vital to the health care ecosystem.

This now brings the total number of fatalities to 1,629.
News
4 months ago

He said the hospital that has been established amid the Covid-19 pandemic will have a tremendous impact on the lives of locals and lauded the doctors for expressing confidence to invest in the health sector.

“We appreciate the many health care workers that are working on the frontline of the Covid-19 and we do not take their work for granted,” he added.

He said the government has plans to promote medical tourism and challenged medics to create a paradigm shift that will see patients stop traveling to foreign countries to seek medical care.

Mutahi noted that the government is registering poor Kenyans for free under the NHIF scheme to ensure they access quality health care.

Mutahi further called upon Kenyans to protect themselves from the Covid-19 pandemic by strictly observing the safety protocols.

He especially underscored the need for Kenyans to avoid shaking hands and asked Kenyans to emulate members of the Akurino sect who do not shake hands out of their beliefs.

“There is a need for concerted efforts to come up with realistic ways of mitigating against the effects of Covid-19,” he added.