• Kenya spends an average Sh20.6 million annually on one MP, another Sh7 million on staff - far more than before the Constitution was promulgated. Under BBI, Parliament could swell to well over 500 lawmakers. 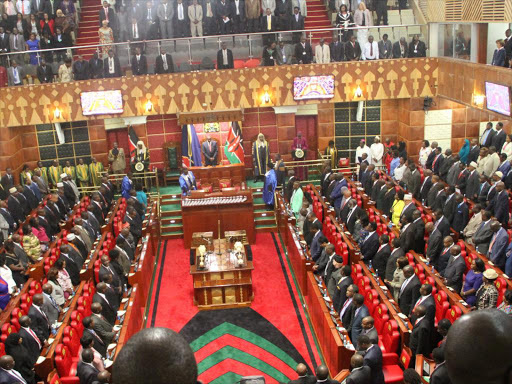 President Uhuru Kenyatta and ODM leader Raila Odinga have ignored a special audit of the Constitution that said Kenya is overrepresented by too many greatly overpaid lawmakers.

The two are urgently trying to amend the Constitution and pass BBI proposals to enlarge the Executive and dramatically expand Parliament by 70 constituencies.

Bigger government could mean a Parliament of well over 500 members; some estimates place it at 600.

A special audit report on socio-economic impact of the 2010 Constitution revealed that Kenyans are over-represented by exorbitantly paid lawmakers in the two tiers of government.

It was tabled in Parliament in October 2016.

The economy is much worse today, borrowing and public debt have soared. Covid-19 has made the situation worse.

The report prepared by a Working Group chaired by former Auditor General Edward Ouko recommended the number of elected leaders be slashed.

It recommended their huge allowances overburdening taxpayers be reduced.

Their report said Kenyans are “spending far too much on their far too numerous MPs and MCAs in 47 counties".

The report was presented to the Budget and Appropriations Committee of the National Assembly, then chaired by Mbeere South MP Mutava Musyimi.

Kenya spends an average of Sh20.6 million annually on a single MP and and another Sh7 million on staff. That is far higher than before the 2010 Constitution.

“There are concerns regarding the cost implications of the expansion of Parliament from a single Chamber with 210 members to a bi-cameral Parliament with 416 members,” the Working Group said.

“These concerns are motivated in part by the view that the earnings of Members of Parliament are exorbitant and out of proportion with the country‘s means,” the report said.

On Sunday, Musyimi told the Star the country decided to carry out the audit of the Constitution following a public outcry over the high cost of national and county governments.

“The budget proposals from National Treasury shocked us. The numbers were not adding up. We noted systemic problems, the issue of overrepresentation and overlaps of mandate," he said.

Musyimi said before Parliament embarked on forming the team to audit the Constitution, President Uhuru and Deputy President William Ruto were briefed and supported  the process.

“The report is a property of Parliament now. We made recommendations which should be implemented. The cost of representation was a major thing. BBI could have addressed some of the issues but it has been rushed,” he said.

It proposes an expansion of Parliament that could see the number of MPs shoot up to 456 lawmakers up from the current 416.

Today the bicameral Parliament is made up of 67 Senators and 349 members of the National Assembly, excluding the two speakers.

However, the BBI has proposed creation of 70 extra constituencies for the National Assembly.

It proposes amendment of Article 98 of the Constitution to create vacancies for 94 senators, one man and one woman to be elected in each of the 47 counties.

The BBI Bill also calls for the creation of the position of Prime Minister and two deputies, as well as the office of the leader of the opposition.

The Leader of the Official Opposition, would come complete with a shadow Cabinet, all at the taxpayer's expense.

With the proposed reintroduction of a hybrid governance system (president and PM) through BBI, some Cabinet Secretaries and assistants will come from elected members of the National Assembly.

Others will be non-parliamentarians who will attend Cabinet in an ex-officio capacity.

Kenya adopted a pure presidential system after promulgation of the Constitution in 2010 but before that, it had a hybrid of presidential and parliamentary systems.

Each MPs earns basic pay of Sh710,000, plus mileage and sitting allowances. Thus, their employer, the Parliamentary Service Commission, takes the lion's share of the budget.

On Saturday during the Jamhuri Day celebrations, President Uhuru Kenyatta defended the their move to push for the creation of more positions in the Executive and Legislature.

Speaking at Nyayo Stadium, the President said more communities will be accommodated by increasing positions at the apex of the Executive from two to five.

He referred to the creation of a Prime Minister's post and those of two deputies.

The President said it does not augur well for nationhood to have only two occupants at the apex of the Executive, the President and Deputy President.

“More so, in an ethnically diverse nation such as ours, this creates an environment of ‘political exclusion’ resulting in the cyclic violence we have witnessed in every election,” the President said.

He added, “BBI intends to complete what we started when we adopted the 2010 Constitution and promised to change it later.”

The Working Group said, however, that not only are Kenyans overrepresented but also the country has among the world's mostly highly paid MPs and MCAs.

“Kenya has more representatives compared with countries with similar population and size of economy. The number of MPs and senators alone is above the global average,” the team said.

The report recommended the Salaries and Remuneration Commission should reduce and tightly cap allowances paid to public officers, including state officers, citing MPs, senators and MCAs.

It said the SRC should develop guidelines for Parliament to follow to ensure no more than 60 per cent of the gross pay for MPs, MCAs, and other state officers is paid as basic salary. It said no more than 40 per cent shall constitute allowances.

Soy MP Caleb Kositany and his Mumias East counterpart Benjamin Washiali criticised the President's justification for big government. They said there is no constitutional crisis to warrant the amendments.

Kositany told the Star, "The best gift the President can give Kenyans is to convince Raila to retire with him in 2022.

“The Constitution we have right now is the best in the world, the most progressive. The problem is an individual who has refused to accept defeat in any other presidential race. We now want to amend the Constitution because of him,” he said.

Washiali, the former Majority Whip in the National Assembly, said creating top Executive positions for the top five tribes is not a solution to conflict and competition.

“In a democracy like ours, we should mature enough to respect the decisions of Kenyans. When one feels aggrieved, we have the courts.

"Now we want to create more positions at the expense of Kenyans just to benefit a few," Washiali said. "What happens to other communities? We ought to be serious as a country."