Move comes as a relief to public officers who were yet to be employed under the said terms.

• The Public Service Superannuation Scheme will see state officers contribute 7.5 per cent of their basic salary. 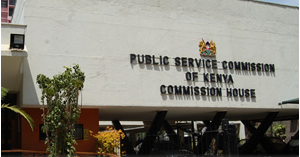 Civil servants who are paying National Social Security Fund will be moved to permanent and pensionable terms starting January next year.

The move may come as a relief to hundreds of public officers who were yet to be employed under the said terms.

Head of Public Service Joseph Kinyua has directed the various officers managing the state’s payroll to move the category of staff as advised.

Authorised officers are further advised to realign the payments so that employees take no less than a third of their salary.

This is in the face of the impending roll-out of the defined contributory pension scheme by civil servants which will be executed under a check-off system.

The Public Service Superannuation Scheme will see state officers contribute 7.5 per cent of their basic salary.

Employees will have an option to make additional contributions voluntarily above the mandatory 7.5 per cent, while the government will cater to 15 per cent.

Kinyua, in a circular on the new scheme, said the government will not increase its contribution in the event an employee pays above the set threshold.

Officers who are on extended contracts after retirement will not be part of the new pension scheme as well as employees on contract.

Those aged 45 years and above who don’t opt to join the new scheme will remain in the current scheme.

Those above 45 years who choose to join will be allowed.

Members of the scheme will be employees serving on permanent and pensionable terms and aged below 45 years as at January 2021.

New employees who join the public service in January next year on permanent and pensionable terms of service will also be part of the scheme.

Also to be included are employees whose services were transferred to county governments that are covered under the current Public Service Pensions Scheme.

“The Ministry of Public Service and Gender shall provide a check-off facility to effect the contributions,” Kinyua said.

Accounting officers will be required to remit employee and government contributions by the 10th of every month.

In the event an accounting officer fails to deduct a member’s contribution, the sum contributed will attract a compound interest of three per cent per month.

Where the government fails to make employer contributions in any month, the sum will attract a compound interest of three per cent.

Civil servants will be allowed, on attaining the retirement age, will be able to access their own contributions and a further 50 per cent of the governments’ contribution.