The country's fatalities have risen to 1,545.

• Mwangangi said that there are 1,102 patients currently admitted in various hospitals across the country. Another, 8,016 patients are on the home-based care programme.

• A total of 71 patients are in ICU, out of which 31 are on ventilatory support. 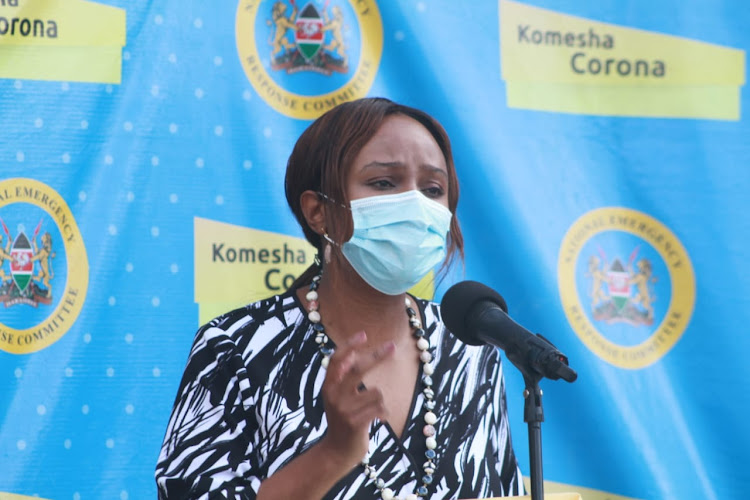 The CAS in a press briefing at Afya House confirmed that this was from a sample size of 4,721 recording a positivity rate of 11 per cent.

The country's fatalities have risen to 1,545 after another 14 patients succumbed to the disease.

A 28-year-old medic from Machakos, Stephen Mogusu, is among those who succumbed.

Mwangangi said that there are 1,102 patients currently admitted in various hospitals across the country. Another, 8,016 patients are on the home-based care programme.

A total of 71 patients are in ICU, out of which 31 are on ventilatory support.

Also, 66 patients are separately on supplementary oxygen, out of which 58 are in general wards and eight in the HDU.

Meanwhile, 425 patients have recovered from the disease out of which 330 were from the Homebased care program while 95 were discharged from various health facilities.

From the new cases reported on Tuesday, 504 are Kenyans while 17 are foreigners.

In terms of gender, 315 are males while 206 are females and the youngest in a three-year-old child and the oldest is 90 .

Meanwhile, the government has insisted on its 'unwavering' plan to deal with the Health workers' predicaments.

At the presser, Mwangangi said the government and the ministry of Health are both taking the safety of Kenyan doctors seriously.

The CAS said NHIF management has agreed to cover all medical services of medics from across 45 counties.

Lack of a comprehensive insurance cover under the National Health Insurance Fund (NHIF) has been one of the major grievances by the Health workers.

Among their grievances, the doctors have expressed disappointment in the salary delays over the past months.

Dr Mogusu succumbed to Covid-19 while he had not received his salary for five months.

In the ministry's defense, Health CS Mutahi Kagwe insisted that the ministry has cleared majority of the healthcare workers salary arrears.

"Of the over 9000 healthcare workers hired under the UHC program, approximately 8,600 have been paid their dues including all their arrears for the period worked," Kagwe said.

"This is not the time to deny our people the much-needed medical attention they so much require, as doing so would tantamount to leaving them open to attack by the enemy."

KMPDU chairperson Samuel Oroko has insisted that all doctors will down their tools should the government fail to adhere to their grivances.

"We have seen governors coming out to defend themselves instead of looking for solutions. It is insensitive when Kenyans are dying and people are busy collecting BBI signatures, pulling huge crowds that are super spreaders of the virus, " he said on Tuesday.

"We have not had any meaningful engagement and commitment by the government of the day. Doctors across the country are well mobilised and are ready to withdraw their services for purposes of protecting their lives."

Nurses have also issued a strike notice to both the national and county governments.

The 14-day strike notice issued by the Kenya National Union of Nurses on November 23 lapsed Tuesday.