•Ruto said it is never too late "to do the right thing".

•The DP said he cannot stand aside and do nothing about BBI. 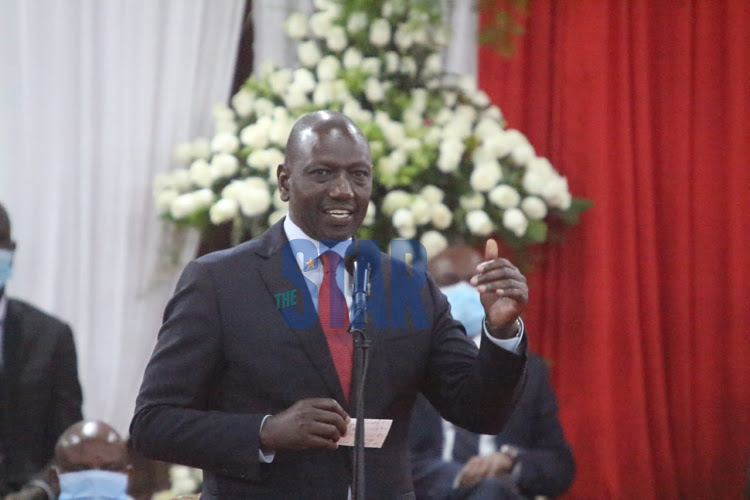 Deputy President William Ruto speaks during the launch of BBI Report at Bomas of Kenya on October 26, 2020.
Image: FILE

Deputy President William Ruto now says there is no legal framework that would guide the push to amend the constitution as was the case in the 2005 and 2010 referenda.

Addressing for the first time what he fell short of terming an illegal process, Ruto said it is unfortunate that the country is in a fix.

"We are all in this process... it will be clear, we don't have a legal framework that is supporting this process like the 2005 and 2010 referenda,' Ruto said in an interview with Citizen TV on Thursday.

Prodded on whether he meant BBI was illegal, he said there being no legal framework does not make a process illegal.

"We need to be careful about the process... is it a popular initiative or a parliamentary one?" he said

Ruto maintained that as a Kenyan he cannot sit on the fence when a fundamental constitution al review is being done.

"I don't want to be asked one time that the Deputy President was there he had real good ideas but he did not come forward..."

The DP noted that the he was happy that the BBI secretariat incorporated some of the reservations raised by various stakeholders.

"Even as we discuss the subject, we need to discuss it with the background where the country is.. there is the secretariat, certainly the BBI secretariat is listening.....it is the case," he said.

The DP maintained that Kenyans need to be careful with the process with which the whole BBI issue is conducted.

"In the 2010 referendum, there was a legal framework, we will have to work with what we have...some of the concerns that have been raised have been taken on board," he said.

He went on: "The Supreme Court made a decision that process is as good as the result, this is a popular initiative; we need to be careful how it is done."

The DP said there is a lot of push that "the train has left the station".

"Some are saying where were you; it has been two years...it has never been late to do the right thing."