Treasury on the spot over delayed release of Sh78bn to counties

• Treasury must transfer money to the operations account before requisitions are made to authorise release of funds. 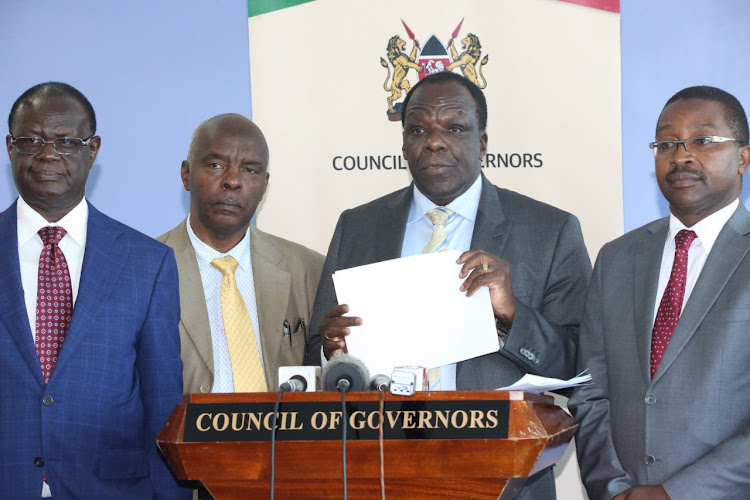 CASH-STRAPPED: Council of Governors chairman Wycliff Oparanya and other governors during a briefing on the Ugatuzi Initiative.
Image: COURTESY

The National Treasury is on the spot for delayed release of Sh78 billion to counties, a situation that has brought most of them to their knees.

The devolved units have not received disbursements for three months, disrupting services, including the fight against Covid-19.

Governors have warned that services in the counties could soon come to a halt if the Treasury continues to hold onto the funds.

A Senate committee has summoned 'Big Five' players in the devolution arena to discuss challenges, including the late disbursement of cash by the Treasury to counties that have affected budget executions.

Yesterday, CoB Nyakango disclosed that the counties have only received funds meant for two months since the beginning of this financial year.

Even so, the funds were released in September– nearly three months into the 2020-21 financial year.

This was caused by the prolonged delay in passing the enabling laws owing to the stand-off in the passage of the third basis for revenue sharing among counties by the Senate.

“It is actually true that they have not received the equitable share for September, October and November,” Nyakango said. She put the blame squarely on the Treasury’s doorstep.

“I authorise the release of what has been put in the county revenue fund. So they know who has not given them the money. It is definitely not CoB."

"Why would I sit on the money if it is in the accounts?” the CoB posed, turning the spotlight on the Treasury.

The Treasury has to transfer the money to the operations account before requisitions are made to her office to authorise the release of the funds.

The 47 devolved units were allocated a total of Sh378.1 billion – Sh316.5 billion for equitable share and conditional grants by the national government.

The grants include Sh6.21 billion for lease of the controversial medical equipment, and Sh4.33 billion for 11 level 5 hospitals.

Others include Sh9.43 billion from the road maintenance and fuel levy. Loans and grants from development partners’ account for Sh30.2 billion.

The Public Finance Management Act, the County Allocation of Revenue Act (Cara) as well as the cash disbursement schedule approved by the Senate, requires the Treasury to promptly and without undue delay release the cash to the counties.

The money should hit the respective county revenue fund accounts held at the Central Bank by the 15th of every month for use the following month.

The Treasury last released the money on September 17. The Sh50 billion was released to carter for the months of July and August after services in counties were halted due to lack of finances.

Early this month, Council of Governors chairman Wycliffe Oparanya protested to Yatani for the delayed disbursement and warned of another shutdown should the crisis persist.

In a letter dated November 2 to the Treasury CS, Oparanya said the counties had not received the September and October allocations as provided for in the Division of Revenue Act and County Allocation Revenue Act (Cara) as stipulated in the Cash Disbursement Schedule.

“To this end, county employees have not been paid salaries for the month of September and October. The implementation of the development budget for quarter four is also lagging behind,” Oparanya said.