Kinoti said DCI was not going to reopen completed cases

• Kinoti said his address on Monday was not intended to mean that the DCI was going to open completed cases that were investigated and closed.

• He said that was an acknowledgment of concerns raised by the affected Kenyans to assure them of DCI's commitment to investigate all reported threats to security. 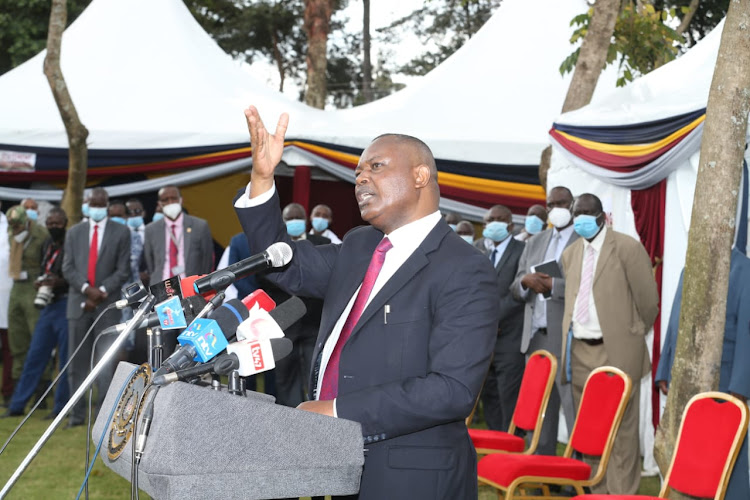 DCI boss George Kinoti has dismissed claims that the directorate is reopening cases of the 2007/08 post-election violence.

Kinoti on Tuesday said his address on Monday was not intended to mean that the DCI was going to open completed cases that were investigated and closed.

He said that was an acknowledgement of concerns raised by the affected Kenyans to assure them of DCI's commitment to investigate all reported threats to security and sensitise the public on the need for a peaceful co-existence.

"The directorate had received complaints of fear and apprehension by members of the public who feel their lives and property are in imminent danger owing to threats," he said.

"We remain true to our mandate to prevent, disrupt and deter crime before it occurs. We shall continue to embrace proactive crime management and to safeguard the lives and properties of all Kenyans and apprehend those who breach the law and endanger their fellow citizens."

It had been reported that the government had made a surprise U-turn and announced it’s reopening cases on the 2007-08 massacre, with victims of the horrendous Kiambaa Church ready to testify.

The move came more than seven years after the government officially announced that there was no evidence to prosecute perpetrators of the bloodbath that left more than 1,100 people dead and 650,000 forced from their homes.

Just three weeks ago, lawyer Paul Gicheru surrendered to the ICC in what others claim is an attempt to revive the crimes against humanity charges against Deputy President William Ruto.

Kinoti after meeting victims who had flocked the DCI headquarters to record statements said 72 murder cases, 44 land displacement cases and 118 of threats linked to the 2007-08 post-election violence had been lodged.

The DCI boss vowed to do whatever it takes within the law to bring the perpetrators of the post-election violence to book, saying that would happen “very soon”.

"Very soon you will see the outcome of this event. We will look for them. I know they are waiting for another poll violence to occur. Let them try again. We will follow the truth, prepare all the files and say this is the person who killed this person," he said.

Ruto allies term it a desperate move to frustrate his presidential bid.
News
1 year ago

But on Tuesday he said  whenever DCI receives such complaints from a person or group of persons regarding a threat to their security, they are bound by duty to investigate expeditiously and without and favour or prejudice.

'Dependent on the findings of the investigations, we prefer charges or we close the file with no further police action," he said.

According to Kinoti, if in the course of investigations they find that a particular case was determined by courts, his teams do not reopen such a case.

This is because nobody can be subjected to double jeopardy as defined in the country's constitution.

"Instead, we advise the complainant to use alternative justice mechanisms allowed by the law like a civil remedy to address their concerns, Kinoti said.

Kinoti maintained besides arresting perpetrators of crime, their mandate is to inform, educate and sensitise members of the public on the observance of the law and peaceful co-existence since not every complaint has criminal elements warranting arrest and prosecution.

Her said unbeknown to the public is that many cases investigated by the DCI do not result in arrests.

"Indeed, in many such cases, we pacify communities by educating them on the rule of law and consequences of breaching the country's legal statutes," he said.

"I, therefore, wish to caution members of the public against being misled by those taking my statement out of context alluding that the DCI is revisiting PEV cases," he said.