• Agriculture contributes an average of 27 per cent of the Gross Domestic Product, with the labour force being predominantly women

• Discriminatory social and traditional practices on marriages and inheritance compromise women's ability to own, manage, and control land and property. 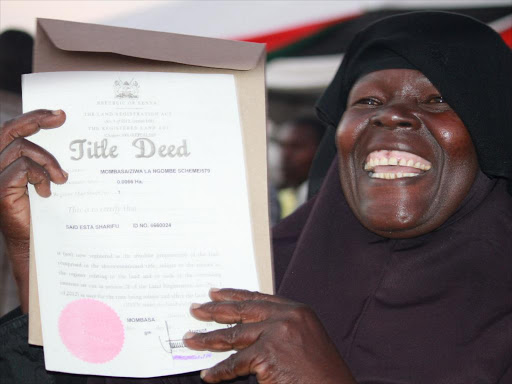 Despite women contributing 75 per cent of the agricultural labour force, they only own one per cent of title deeds, which are the most common forms of collateral limiting access to loans and financing.

This is according to UN Women Kenya who held a buyer and seller forum in Mombasa on Thursday to provide a platform for buyers and agro-dealers to engage with women framers.

The Agricultural Finance Corporation who collaborated with UN Women added agriculture contributes an average of 27 per cent of the Gross Domestic Product, with the labour force being predominantly women.

"While this is the case, the uptake of credit by women for the development of agriculture is at a minimal low, women and youth remain financially excluded not only due to lack of hard collateral that is required by most financial institutions, other factors like low literacy levels, lack of markets, extension services and minimal financial literacy contribute significantly to this low uptake," the corporation said.

A report released in July by FIDA Kenya and Human Rights Watch dubbed  'The Women and Matrimonial Property Rights in Kenya' states discriminatory social and traditional practices on marriages and inheritance compromise women's ability to own, manage, and control land and property.

According to the report, women who want to leave their husbands only get to carry their personal belongings and do not claim any share of the house or land from their husbands.

However, the Marriage Act calls for registering all marriages granting women a legal basis for land ownership claims while the Matrimonial Property Act protects women's rights to property acquired during the marriage.

Additionally, the Land Act gives spouses some protection from having their home or land leased or sold without their consent while the Law of Succession Act gives both male and female children the same inheritance rights.

Despite there being laws that protect women and girls' land rights, they are poorly implemented.