Raila would be provided with a fertile ground for his political reincarnation. 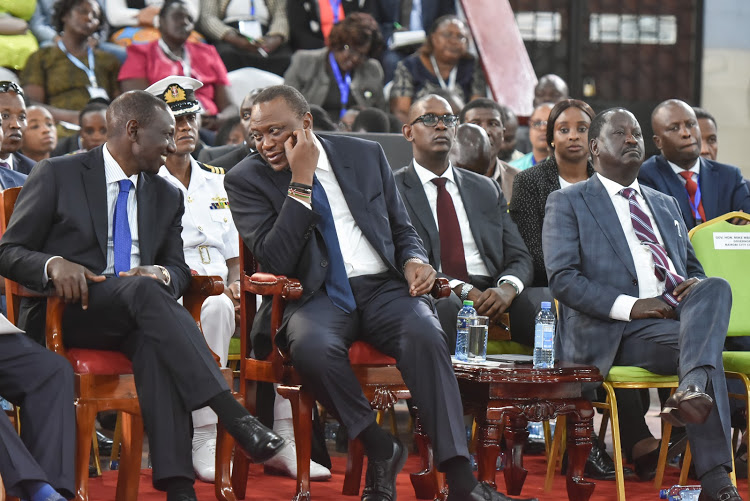 The stage appears set for a contested referendum as it is now clear there will be minimal or no amendments to the Building Bridges Initiative report.

Former Prime Minister Raila Odinga has declared there would be no substantial amendments to the report, dashing hopes of having a consensus on the document going to referendum.

Some have threatened to oppose it and campaign against it.

President Uhuru Kenyatta and Raila seem keen to take the process to the next stage.

Among many other things, it calls for the creation of the post of the prime minister and two deputies - for inclusiveness, it is said.

Raila has even told discontented groups they are free to oppose the document and vote 'no', saying the report contains the views of the majority. He has also said those who now want amendments chose not to present their views to the BBI travelling team.

This begs the question: what will a contested referendum mean for Uhuru, Raila and Ruto?

Daniel Orogo, a political commentator and convener of The Move think tank, said a contested referendum would provide Raila with fertile ground for political reincarnation and consolidation of his political base ahead of 2022.

“Raila is the grandmaster of using referenda to consolidate his political base and position for coming elections, just as in 2005 and 2010. Leading the 'Yes' campaign in 2021 and delivering a win will definitely give him a bargaining stake in political formations ahead of the General Elections," he said.

Orogo said, however, that Raila's push for amendments to some key independent commissions and institutions has made some Kenyans question his sincerity.

“Should he manage to carry through with the plebiscite that results in adverse effects on independent institutions, he will be portrayed as hypocritical and deceitful,” he explained.

Political and communications strategist Advice Mundalo said the BBI process, being a product of the famous handshake, both Uhuru and Raila are keen to see it to fruition.

“It means even more for Raila than Uhuru since he still has political ambition and delivering the BBI will be a solid re-assurance to his supporters that he still can deliver,” he said.

Orogo said Ruto is torn in between ambition and duty. He explained that Ruto has a duty as a high-ranking official in the Jubilee administration to support initiatives of his boss, the President.

He said Ruto's opposition to Wako Draft in 2005 catapulted him to be a key Pentagon member in the formation of ODM.

“His 2010 'No' campaign in the referendum portrayed him as a key figure that Uhuru Kenyatta needed in consolidating Rift Valley votes to deliver the 2013 General Elections,” he explained.

Orogo added that should Ruto oppose and lead the opposition to the referendum, he could be presented as a voice of reason and win favour amongst religious groups, the youth, marginalised groups and political failures.

“If he supports the BBI, he will throw his opponents into confusion, neutralise the debate and send his detractors to the drawing board,” he stated.

Mundalo said Ruto is keen to show dissatisfaction with the BBI process since he is aware that it gives his perceived 2022 front line competitor Raila great advantage over him.

“Whereas the best thing for Ruto to do as a person with reservations about the BBI would be to oppose and lead the NO campaign, he is cognizant of the fact that, losing the referendum will leave a rotten egg on his face and expose him as not having the numbers,” he added.

Mundalo said, “ Unlike in the 2010 referendum where all he needed was a springboard to national relevance and a test of  his influence, he needs a win to prove his influence in this.”

The analyst said Ruto, being fearful of the facts and understanding the difficulty in winning against the government, is pushing more for a consensus to avoid a direct personal insult to his own 2022 agenda.

For Uhuru, Orogo says the BBI is his fifth legacy project. “After all, Uhuru has maintained that he wants leave a legacy of a unified and progressive county,” he stated.

He said, however, Uhuru's supporting BBI but not stating publicly that he will not support Ruto should worry Raila.

For the President, Mundalo said the referendum is more about his legacy. “He would wish to have a legacy of having spearheaded constitutional reform to betterment through the BBI,” he added.

Ruto has indicated he is not ready to lead the No campaign in the referendum.

Sources tell Siasa that Ruto wants to concentrate on his grassroots empowerment programmes and does not want to be distracted from drumming up support for his 2022 ambitions.

His allies have indicated that they do not wish to be on the No side of the campaign a short period before the general elections.

“We do not want a divided country ahead of the 2022 elections,” said Soi MP Caleb Kositany, who however maintained that the issues they have raised are those of the people they represent in Parliament.

Kimilili MP Didmus Barasa, another close ally of the Deputy President regretted that they are being pushed to be on the No side of the referendum.

“They want to create an anti-Ruto euphoria and that is why we will not push to have the document amended,” he said.

Ruto on the other hand has also claimed that some leaders are pushing for a contested referendum in order to benefit from election procurement.

The Independent Electoral and Boundaries Commission (IEBC) has estimated the BBI referendum to cost Sh13.7 billion. This has been dismissed by Raila, who has said the poll could cost as little as Sh2 billion.

Opponents of referendums have argued that, if the executive has the power to determine when referendums are held, they can be used as a political tool to suit the needs of the governing elite rather than the interests of democracy.

They also argue that since turnout at referendums is lower than at national elections, the argument that they increase the legitimacy of political decisions does not stand up.