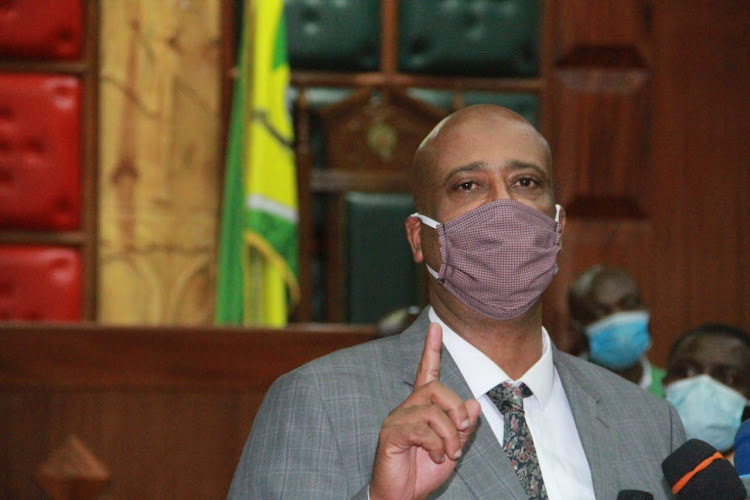 Governor Mike Sonko's administration has been accused of hindering the rehabilitation of Nairobi roads by refusing to hand over contracts awarded before the Nairobi Metropolitan Services took over core functions.

Nairobi Metropolitan Services director-general Mohamed Badi on Wednesday told the Senate Road and Transport Committee that he has had to seek the assistance of the Attorney General to resolve the matter.

Sonko transferred public works, utilities and ancillary services to the NMS in March.

“This is the biggest hassle we have with the Nairobi county government,” Badi said.

He said the AG's office had convened a meeting between the NMS's legal department and their counterparts at the county government to resolve the issue.

“Most firms are crying because they have not been paid for the jobs already done,” Badi said.

Senator Sylvia Kasanga (nominated) said Sonko should have been invited to the meeting to respond.

The relationship between Badi and Sonko has been frosty despite the two agreeing to work together at a function presided over by President Uhuru Kenyatta on August 12.

The President had earlier urged them to work together for better service delivery to Nairobians.

The NMS took over four core functions in a deal signed by Sonko and Devolution Cabinet Secretary Eugene Wamalwa on February 25 at State House. The functions are health; transport; public works, utilities and ancillary services; and planning and development.

Yesterday, Badi told the senators that rehabilitation of roads was planned before the NMS took over.

“The plans had been approved by the time we were coming in. Unfortunately, they had not taken off. We are not doing anything new but what MCAs had agreed on. We, however, cannot do everything they approved,” he said.

The NMS boss said each MCA had been asked to identify two priority projects in their respective wards the agency should undertake.

But lack of funds means that the NMS would only embark on a few projects.

Badi also said that payment of staff seconded to the NMS was a problem after the National Treasury declined to release funds on the grounds that the funds can only be released to the county government revenue account.

Treasury Cabinet Secretary Ukur Yattani cited the County Allocation of Revenue Act and stated that county governments' allocations can only be transferred to the respective County Revenue Fund Account as per the payment schedule approved by the Senate and published in the Kenya Gazette by the CS.

That requirement is contained in the Public Finance Management Act.

Over 6,000 county staff were seconded to NMS after the functions were handed over to the National Government.