•Chinese embassy in Nairobi tells the Star no Chinese company is currently involved in the Lamu coal project. 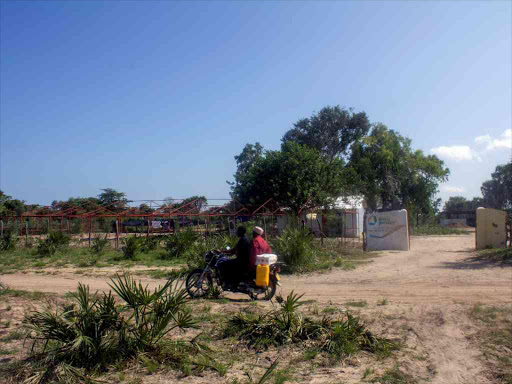 Residents ride a motorbike past the proposed site of the coal plant in Kwasasi village, near Lamu.
Image: FILE

The biggest financier of the troubled Sh200 billion Lamu coal plant project has pulled out, casting doubts on the project’s viability.

The new development was reported by local NGO Save Lamu, citing a credible official at the Industrial and Commercial Bank of China.

The organisation said that ICBC had abandoned the project because of environmental and social risks.

ICBC has not officially announced the move. The Star contacted Jinny Yan, the bank’s managing director and chief China economist, but she had not responded by the time of going to press.

ICBC was expected to invest $1.2 billion (about Sh120 billion) or 60 per cent of the US$2 billion (Sh200 billion) expected development costs for the coal plant.

The 1,050MW power plant would be the first coal plant in Kenya and the largest in East Africa. It was proposed to be built at Kwasasi in Lamu county.

“While we are happy to hear this great news, we will continue our lobbying so that no new investor will be sought to fill the gap left by ICBC. We want the project not just suspended, but cancelled entirely,” stated Khadija Shekuwe, Save Lamu coordinator.

On June 18 last year, former Chinese ambassador Wu Peng said they were ready to talk the other Chinese investor, PowerChina, out of the project, should the government dim it unfit.

Press attaché at the Chinese embassy Shelly Huang on Wednesday told the Star no Chinese company is currently involved in the project.

“I never heard ICBC has intention or interests in investing in the proposed coal project. My information is that the project has been suspended since several years ago. Not a single Chinese company is involved in it now,” she said.

US green energy lobby 350.org congratulated the ICBC for abandoning the Lamu project.

“As a member of the core group of the United Nations Environment Programme Finance Initiative (Unep FI), and as a member of the China-UK TCFD pilot group, ICBC must show leadership and stop its new coal financing in other parts of the world,” Yossi Cadan, finance campaign manager at 350.org, said in a statement.

Nearly all key partners have now abandoned the project, whose construction was announced in 2015.

GE had signed a Sh50 billion agreement with Amu Power to design, construct and maintain the power plant, and acquire a stake in the project at a later stage.

The Lamu project is owned by Amu Power Company, a joint venture between Gulf Energy (developer and co-sponsor) and Kenya’s Centum Investment (co-sponsor).