He had breathing difficulties before collapsing in his Kakamega home.

• The cause of his death is unknown but reports indicate he had breathing difficulties.

• Murungu was also a Member of the Departmental Committee on Agriculture and Livestock up to his death. 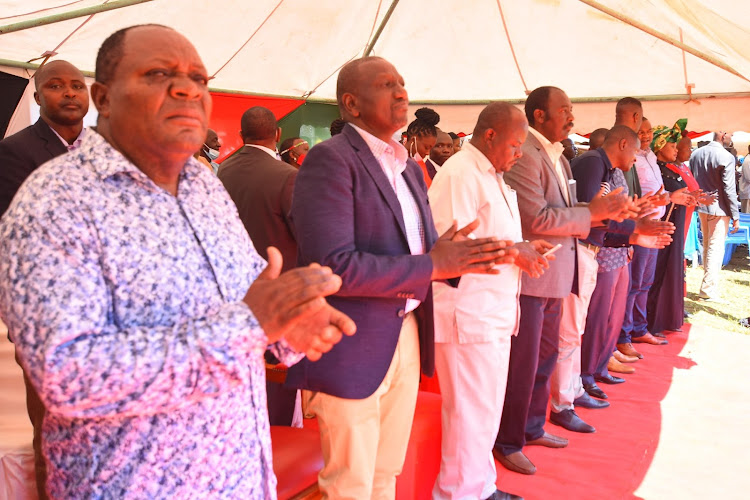 From left is Matungu MPJustus Murunga Makokha who was confirmed dead on Saturday evening.
Image: DPPS

Matungu Member of Parliament Justus Murunga Makokha has died this evening while being rushed to the hospital.

The cause of his death is unknown but reports indicate he had breathing difficulties before collapsing in his Kakamega home.

Murungu was sponsored to Parliament in 2017 by the Amani National Congress party and was his first-term in office.

He was a close ally to Deputy President William Ruto.

The legislator was a Member of the Departmental Committee on Agriculture and Livestock up to his death.

While morning his death, former Kakamega Senator Bonny Khalwale said that the MP had earlier been discharged from Kisumu Aga Khan Hospital where he had been treated for diabetes.

"It is with a heavy heart that I have learned of the death of Hon Justus Makokha Murunga, the MP for Matungu in Kakamega who collapsed at his home 3 days after his discharge from Kisumu Aga Khan Hospital where he had been treated for diabetes. RIP my brother," Khalwale said.

Deputy President William Ruto eulogised Murungu as a focussed, hardworking and visionary leader who relentlessly advocated for the empowerment of the people.

A development-oriented titan who was dedicated to public service, Mheshimiwa Murunga was steadfast, amiable and loving. We will miss his firmness, wise counsel and vibrancy to unite and transform Western region.

National assembly Speaker Justin Muturi and his Senate counterpart Ken Lusaka have expressed their condolences to the family and Matungu constituents.

I have learnt with great sadness of the untimely demise of Matungu MP, Hon. Justus Murunga Makokha this evening.

My deepest condolences to his family and the people of Matungu Constituency whom he served with utmost passion and commitment. May his soul rest in eternal peace. pic.twitter.com/onlrDeWUN8

Kakamega Governor Wycliffe Oparanya said Murunga was a hardworking and selfless leader whom he worked together closely to develop Matungu.

"I'm deeply saddened by his death which has robbed Kakamega a focused leader whose contribution in the development of our County will be missed. May his soul rest in peace," Oparanya said.

ANC party leader Musalia Mudavadi has also sent his condolences to his family and the people of Matungu.

Post a comment
WATCH: The latest videos from the Star
by KEVIN CHERUIYOT Online Journalist
News
14 November 2020 - 22:17
Read The E-Paper