WHO estimates one billion people will die of smoking-related disease by the year 2100.

• Since safe nicotine products have become available, accessible and affordable in countries such as Japan, the UK and Iceland, the ongoing decline in smoking rates has accelerated. 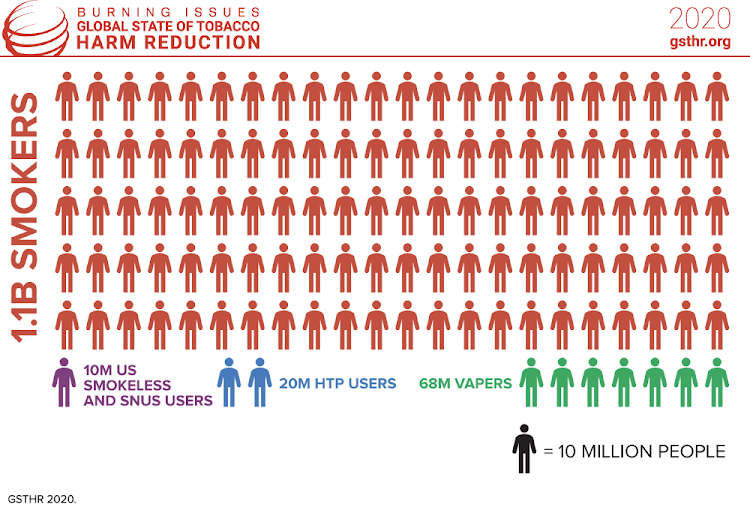 Experts are calling for the scaling up of Tobacco Harm Reduction, which enables smokers to switch to safer alternative nicotine products that do not produce the smoke that causes death and disease.

The authors of the Burning Issues paper revealed that only 9 per cent of all smokers are using reduced-risk nicotine products and they are mainly in high-income countries.

Overall, 98 million people are estimated to use alternative nicotine products worldwide with 68 million being vapers largely located in the US, China, Russia, the UK, France, Japan, Germany and Mexico.

Some 20 million are ‘heat not burn’ tobacco product users with most of them in Japan, where traditional cigarette sales have dropped by 32 per cent since 2016. The remaining 10 million smokeless or snus users mostly in the US.

Although it is noted that the official monitoring of alternative nicotine product usage is currently limited - it is essential to understand their impact and potential in tackling and significantly reducing smoking-related death and disease.

"Nevertheless, these numbers demonstrate the scale of consumer uptake and acceptance of these products when they are made aware of them as alternatives to combustible tobacco, which kills half its users," Knowledge Action Change said in a statement.

The report notes that the global public health crisis of smoking is ongoing and deadly with about 1.1 billion people smoking worldwide. This figure has remained unchanged for two decades despite billions spent by governments and the World Health Organization (WHO) on tobacco control.

Experts now say that the urgent need to find new approaches is clear, especially in low and middle-income countries. In these markets tobacco control measures are often poorly or partially implemented, smoking rates are high or plateauing, population growth is increasing the number of smokers, and health systems are least able to treat the smoking-related disease effectively or offer smokers support to quit.

Since safe nicotine products have become available, accessible and affordable in countries such as Japan, the UK and Iceland, the ongoing decline in smoking rates has accelerated.

However according to the report “despite the emergence of products that are demonstrably safer than combustible cigarettes, proven to be effective in smoking cessation and attractive to adult consumers who are quitting and switching in their millions, Tobacco Harm Reduction continues to be seen by many in global health and tobacco control as a threat, not a public health opportunity."

This illuminating and in-depth report identifies the extent to which tobacco control policy both at the WHO and in individual nation states is being influenced by billions of dollars from US foundations that are actively supporting campaigns against Tobacco Harm Reduction.

Even in countries such as the UK and the US where Tobacco Harm Reduction already has a foothold, institutionalized misinformation and manufactured fear around the risks of adopting safer nicotine products are having a negative impact on confidence – thus discouraging smokers from making the beneficial switch that can improve their longevity and quality of life.

"Furthermore, governments in low and middle-income countries are being encouraged to ban safe nicotine products in the name of tobacco control, while the sale of harmful cigarettes continues unchecked," the report says.

Rising concern over the influence of these actors was echoed in the Philippines House of Representatives a few weeks ago, with calls for a congressional inquiry into the Filipino Food and Drugs Administration’s acceptance of funding from US-based anti-vaping groups.

The launch of the report is in tandem with the GSTHR’S report on a major live data mapping project, which documents regulatory responses to safe nicotine products with live updates to over 200 regional and country profiles.

By contrast, just one country - Bhutan - has enacted a ban on the sale of combustible tobacco, which was currently lifted due to COVID-19.