• Raila indicates the BBI report will be revised to factor in proposals from pastoralists and other groups.

• DP's allies have raised concerns about an alleged scheme to lock out Ruto and build a 'Yes vs No' referendum contest. 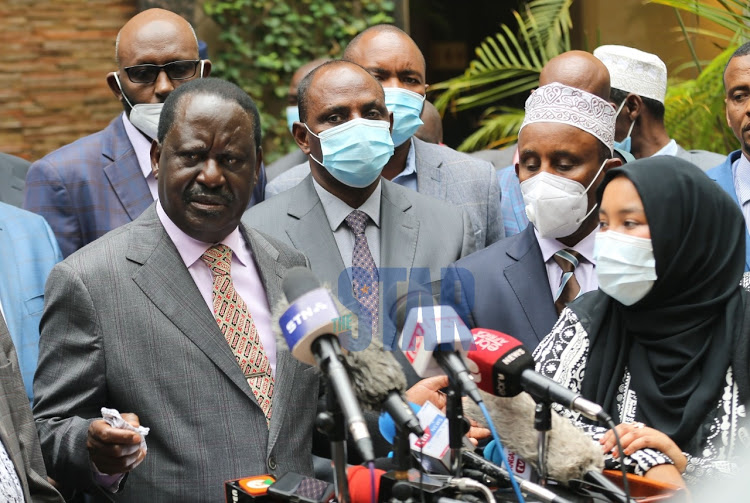 Former Prime Minister Raila Odinga when he addressed the media with governors and legislators from pastoralist communities after a meeting on BBI at a Nairobi Hotel on November 9, 2020.
Image: FREDERICK OMONDI

ODM leader Raila Odinga has yielded to the growing calls by disgruntled groups and opened up the BBI report for amendments.

President Uhuru Kenyatta and Raila initially announced that the window for amendments was closed despite many voices demanding changes.

For the first time, Raila on Monday indicated crucial steps that would culminate in the review of the BBI report to reduce antagonism and avert a referendum showdown.

Today, the two leaders are expected to hold consultations with governors and MCAs at the Enashipai SPA and Resort, Naivasha, to hammer out a deal with two groups crucial to the BBI process.

The former Prime Minister revealed the BBI report would be opened up for a final round of revision to factor in reservations and objections raised by various groups to build consensus.

The ODM leader met a section of pastoralist leaders and said their issues would be addressed and considered in the final-final BBI report.

“The issues will be taken on board. They (pastoralist leaders) will appoint three representatives who will sit down with the technical team to iron out their issues,” Raila said.

The two leaders are expected in the next few days to unveil a framework for the submission of the final views on the BBI report.

They will also name a national referendum coordinating secretariat to oversee the signature collection process, with booklets already printed.

Uhuru and Raila are keen to avoid a contested referendum that could hurt their national unity efforts and slam the brakes on their radical governance reforms ahead of the 2022 polls.

Raila's position on the BBI report could be seen as the ultimate climbdown from his initial stance against entertaining any amendments to the 'final' document.

“I appreciate having had a robust and candid discussion with leaders from pastoralist communities this morning (Monday). Their views on the BBI process that they expressed support for are welcome and shall be taken into consideration as we formulate the way forward for our nation," Raila said.

“The petition by pastoralists that covers several areas in BBI is progressive. The public commitment to amend the BBI to include these proposals is a welcome step towards consensus. With this and other petitions accepted, a non-contested discourse is in the horizon," the DP tweeted.

The leaders had last week identified 10 areas that they wanted amended.
News
8 months ago

Earlier on Sunday, Ruto lashed out at what he termed a scheme to lock out his views in the report, even as analysts say he is an isolated man as Uhuru and Raila build consensus.

“It is defeatist to build walls to shut others out while purporting to build bridges,” Ruto fired at Uhuru and Raila over their push to amend the Constitution.

He tweeted, “Pastoralist (PPG), the church (NCCK),women, the Senate and other stakeholders want consensus on the BBI. It's a contradiction to want to amend the Constitution while refusing to amend a mere report (BBI).”

The  initial 'no amendments' stance by Uhuru and Raila had threatened to birth the 'No campaigns' that could undermine their spirited campaign to unite the country and expand the governance structure.

Uhuru and Raila have said the BBI document is the magic bullet to resolve the country's historical governance and judicial and legislative challenges that have resulted in cyclic electoral violence.

They have argued that implementation of the BBI proposals would bring an end to the zero-sum game of winner-takes-all and address the problem of exclusion.

Critics have warned the BBI is a Trojan horse for the political elite plotting 2022 succession politics.

To build broad-based support for the BBI push to amend the Constitution, Uhuru and Raila have been meeting various players, while Ruto is seen as a spectator in the consensus-building push.

The crucial meeting was seen as part of an elaborate effort by Uhuru and his handshake brother Raila to diffuse the growing rebellion threatening the success of their BBI campaign.

Mudavadi has raised objections to the BBI report and it is understood the President tasked Wetang'ula to process for him a report on the amendments they want included in the report.

On Monday last week, Uhuru and Raila co-chaired a meeting in Naivasha and unveiled a roadmap that could see signature collection completed by December 2 and a public vote held by June 2021.

However, fears that Uhuru and Raila could lose constituencies critical to a 'Yes' referendum victory has forced them to consider amendments to the report. On Tuesday, they will consult with governors and MCAs in Naivasha.

However, Ruto's allies have maintained the consensus-building meetings are aimed at locking out Ruto's participation in the BBI process to push an 'us versus them' referendum.

“How can one explain a scenario where the President himself says Kenyans should improve the report and then the DP expresses his concerns regarding the report and he is ignored?” asked Soy MP Caleb Kositany.

The DP's troops have called for a non-contested referendum, saying concerns by Kenyans about the document should be addressed before subjecting it to a plebiscite.

Some of the DP's reservations include selection process of IEBC commissioners, establishment of the Judiciary Ombudsman appointed by the President, creation of a Police Council to replace the National Police Commission.

Kikuyu MP Kimani Ichungw’ah said, “As the DP said you can't be claiming to build bridges while erecting walls to shut others out. It is defeatist and maybe someone is working hard to create a divisive referendum for their selfish ends."

He added, “I will remain focused on the people-centred issues we have been pushing for and call on the President to take the lead and facilitate consensus building as he committed on Mashujaa Day, not leaving the process to self-seekers and political brokers now driving the process towards a divisive agenda.”

Elgeyo Marakwet Senator Kipchumba Murkomen said the fact that Uhuru and Raila are meeting disgruntled groups should open a window for all Kenyans to make proposals.

“Now let’s amend the document to capture concerns of pastoralists, devolutionists, the Judiciary, etcetera," the ex-Majority leader in the Senate tweeted in response to Raila's meeting with pastoralists.

Then pass the BBI by consensus. We don’t want an us-versus-them attitude. Let’s reason together as Kenyans,” Murkomen said.

A 2013 presidential candidate Prof Joel Ole Kiyiapi said, “We not only need to negotiate BBI proposals, we we must scrutinise every provision. Do the amendments remedy weaknesses in the Constitution or are we opening a leeway for weakening it? These questions are relevant.”

Nyeri Town MP Ngunjiri Wambugu told the Star that “in any case, those calling for more time for consensus are the same ones who opposed the process from the beginning."

“I cannot understand why they never went to give their views in a period of 24 months. The window for giving views was not barred for them but they are the ones who chose not to go and instead deliberately fought it with propaganda,” he added.

Suna East MP Junet Mohamed described the Ruto camp as “hypocritical", saying they chose to fight from outside instead of joining the process when it started.

Junet said had they agreed to be part and parcel of the process, their concerns and issues would have been addressed.

“They are now looking for a scapegoat. The BBI provided several avenues for them to propose changes and other things for consideration. They opted to fight it. They did not want the BBI. Why now?" The Minority Whip in the National Assembly asked.

Duale 'optimistic' on revision of BBI report after Raila meet

Duale said the leadership will soon appoint experts to work alongside the BBI team.
News
8 months ago