• Farmers in the Western region of Busia, Bungoma, Kisumu and Siaya Counties also received seeds for the long rains season. 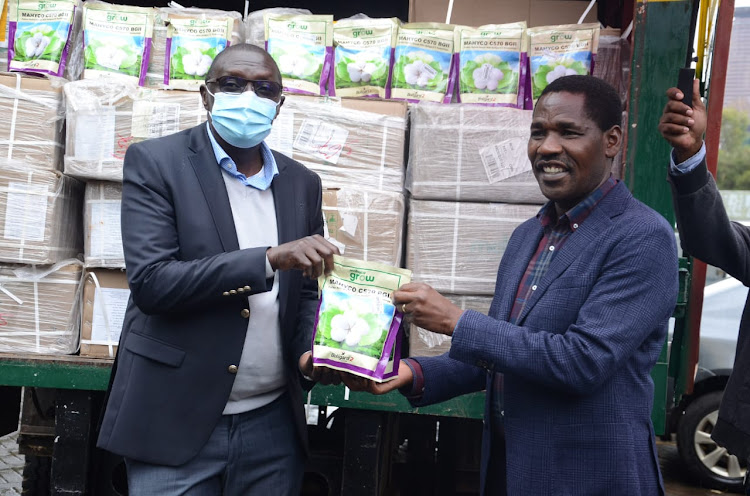 The government has given 16.3 metric tonnes of genetically modified cotton seeds for Eastern region.

“We wanted farmers to have the seeds when the season was starting but there have been delays due to the usual process of testing by the Kenya Plant Health Inspectorate Service to make sure the seeds are certified,” he said.

Munya spoke during the launch of the Bt cotton seed distribution on Friday at Kilimo house.

He said the journey towards commercialization of Bt cotton has been long and tedious, with a myriad of challenges, including misunderstanding, suspicion and a deliberate campaign to discredit the benefits to be derived from actualizing its production.

Munya explained that in March 9, the government launched the process of testing Bt cotton seed for commercial production in Alupe University College in Busia County.

“We thereafter established 700 demonstration plots in Busia, Kisumu, Baringo, Kwale and Tana River Counties. This crop is yet to be harvested but I am informed that farmers have observed high germination rate, early maturation and resistance to common pests, especially the troublesome African Bollworm. This has given the confidence and assurance that Bt Cotton can now be produced commercially,” he said.

The CS noted that a thriving cotton and textile industry is key in the socio-economic development of any country, and has the potential to employ millions of people and generating significant foreign exchange.

He further stated that in pursuit of the revitalization programme, the Government will procure and distribute Bt cotton seed and pesticides to 23 counties suitable for cotton production during the current financial year 2020/21.

“We have already secured 16.3MT of Bt cotton seed for planting during October/November season in the Eastern region. As we seek to enhance cotton production, the Government is currently negotiating a Free Trade Agreement with USA and UK. While we expect positive outcome in the negotiations, we have a great responsibility for ensuring that we will have the capacity to satisfy the requirements of these expansive markets once they are secured,” the CS said.