Ruto men left out of key BBI meeting in Naivasha 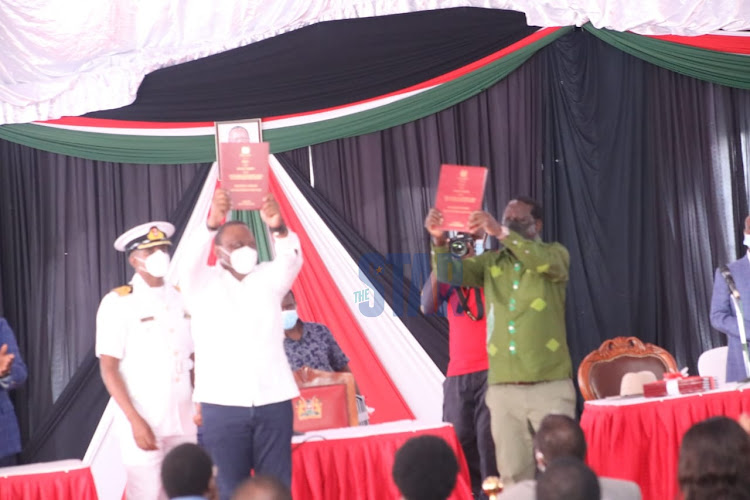 Allies of Deputy President William Ruto are claiming they have been left out of a key BBI meeting to be presided over by President Uhuru Kenyatta in Naivasha this Sunday.

The 'invite-only' retreat could hinder efforts to build consensus on the Building Bridges Initiative report.

The meeting to be attended by ODM leader Raila Odinga, will include at least 250 MPs out of the 416 lawmakers and is aimed at thrashing out at least six contentious issues.

It will also unveil the roadmap for the implementation of the BBI proposals.

On Thursday, Ruto warned against what he termed as a "us versus them; winners versus losers; this community versus that community” drive saying such a move could divide the country further.

“Let us accept that a good idea will give way to a better idea. Saying that your views are final is not going to help us,” the DP said.

He appeared to suggest that some forces were trying to hijack the BBI process in a bid to block leaders with divergent views.

The DP spoke during the burial of Elijah Kuyo, the father of nominated Senator Mary Seneta.

Senate Majority Whip Irungu Kangata said the meeting being organised in Naivasha was for Uhuru supporters only.

It emerged on Thursday that allies of the President and those of Raila were plotting against further amendments to the BBI report.

“I have been in this process before and the last thing you want to do is open up documents of this nature. Once you close the document and open a window, you will eventually open the windows and finally open the door. You’ll be back to square one,” Ndaragwa MP Jeremiah Kioni said.

Kioni who chairs the National Assembly's Constitution Implementation Oversight Committee said consensus being sought is on the implementation matrix and not on any other issues.

“I believe I am in the school of thought which says we go with it as it is and improve it later. Since this process is on, those who are opposed can come up with an alternative around the same and have it on the table. But for this one, we must not open it,” he said.

Former Machakos Senator Johnson Muthama led a section of Ukambani leaders allied to Ruto in declaring that they will reject the document if their proposals are left out.

Muthama who hosted the leaders at his Mua home, said the report has many gaps and should be amended to accommodate their proposals before a referendum.

"If the BBI proposals are not corrected according to the wishes of Kenyans, tutaitupa dirishani mpaka nje (we'll throw it out through the window)," Muthama said.

National Assembly Minority leader John Mbadi said the agenda of the Naivasha meeting will be to officially handover the BBI task to Parliament.

"The BBI technical team did their part, we are going to be taken through the document and officially receive it for implementation," Mbadi said.

The pro-BBI forces have identified appointment of electoral commissioners, disbandment of the National Police Service Commission and the Senate's roles as some of the sticking issues.

The appointment of the Judiciary Ombudsman, whether elected women representatives should remain in the National Assembly and dealing with bigger constituencies that will miss out on an extra MP are other thorny issues.

Ironically, the expansion of the Executive, which is one of the contentious issues raised by Ruto on Monday at Bomas is not listed among thorny issues to be discussed in Naivasha.

On Sunday, select governors, senators, MPs, county assemblies speakers and MCAs will attend the meeting in a bid to strike a deal on the contested issues and unveil the road map to a referendum.

National Assembly Majority leader Amos Kimunya confirmed to the Star that key BBI leaders will be holding technical meetings in Naivasha over the weekend with a target of about 200 participants.

“We are working on the logistics. The whole point is to get all the governors, senators, MPs to be taken through the technical aspects of the BBI,” Kimunya said.

The Kipipiri MP denied Ruto allies have been locked out.

“We are all-inclusive. Nobody will be left behind. Nobody has got an invitation. People will get the invitations starting today (Thursday)," he said insisting that there is a possibility of doing the sessions in batches to accommodate more people.

But Nandi Senator Samson Cherargei, a key Ruto confidant, said invites had been sent out to the Kieleweke-leaning MPs and senators.

“Some of us have been critical of BBI and it seems we will not be allowed to give our views. I have not been invited to the Naivasha meeting yet others have been invited. It looks like the people who are going to Naivasha are pro-BBI and have been selected,” Cherargei claimed.

He said there should be a committee to synthesise and refine the document and come up with a report that will be easily acceptable.

“It looks like the main architects of BBI are setting the country on the platform of us versus them. This is not good for the country. We should ensure that we bring everyone on board,” he said.

Kimilili MP Didmus Barasa claimed invites had been sent out through a Whatsapp group of Kieleweke MPs and not through the formal communication channels.

“The invites are being handled by our Majority leader Amos Kimunya who used non-parliamentary means by selectively inviting MPs in the Kieleweke camp,” Barasa said.

The Naivasha meeting is seen as a critical session to strike a common ground among BBI proponents to pave the way for a marathon rollout of the implementation of the final report.

The meeting will craft a matrix for jump-starting the process that involves drafting a referendum bill, collection of one million signatures and eventually coming up with a referendum question.

“In the next 14 days, we will have a referendum bill that will be taken to IEBC accompanied by one million signatures for verification. I hope IEBC won’t waste time. That bill will then be taken to the county assemblies,” Orengo said during a public address in Kasipul Kabondo, Homa Bay county.

On Thursday, pro-BBI camps held separate meetings to strategise on the retreat agenda even as Ruto allies cried foul of being blocked from attending the session.

The National Assembly's Justice and Legal Affairs Committee held a joint session with the Senate's Justice, Legal Affairs and Human Rights team to flesh out contentious issues in the BBI report.

Kimunya and Mbadi led their troops in brainstorming sessions at Nairobi hotels ahead of the retreat.

Senate Speaker Kenneth Lusaka led the leadership of the House in a meeting with devolution stakeholders in Naivasha to agree on how to deal with the proposal to whittle down the House's role on revenue-sharing.

However, there are concerns even among politicians that some proposals in the document need to be cleaned up to avoid contradicting some sections of the Constitution.

On Thursday, Ruto warned unnamed leaders against trying to block divergent views saying every Kenyan's view on BBI proposals must count in the constitutional review process.

The DP, who has called for a radical revision of the BBI report, said it is possible to strike a consensus on the proposals if some leaders eliminated what he called 'selfish interests' in the push to amend the supreme law.

“Let us stop the language of 'lazima'. It is possible for us to have a win-win referendum. We know there are people who benefit when people are walking separately," he said.

There are reports that allies of both Uhuru and Raila have been meeting to strategise on how experts will be appointed to steer the country into a referendum with some likely to be co-opted from the BBI steering committee that prepared the report.

Next stage of BBI should be inclusive

The BBI team has worked hard to listen to all points of view in preparing its report. That inclusive attitude should continue as the BBI draft ...
Opinion
1 year ago