GO AFTER THE MONEY

• Concerns raised of the projects delaying further over no budgetary allocation for the current financial year.

• The probe will be in respect of works at the Karatu, Marsabit, Ruring'u, Kamariny and Kinoru stadiums. 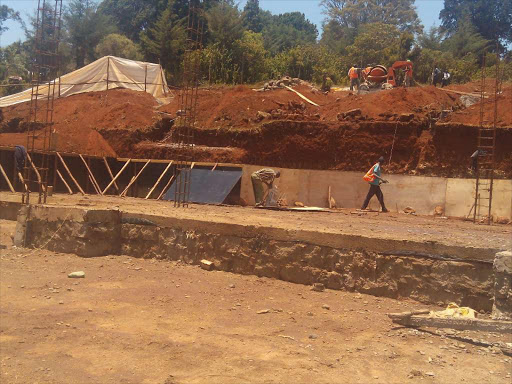 Sports Kenya officials could be subjected to anti-graft investigations over irregularities in the construction of several stadiums across the country.

A new report by the National Assembly Sports committee has revealed the mess that has riddled the projects.

The probe will be in respect of works at the Karatu, Marsabit, Ruring'u, Kamariny and Kinoru stadiums.

During the unveiling of the Jubilee manifesto in 2017, DP Ruto assured Kenyans that the sports facilities would be completed.

However, the findings tabled in the National Assembly by the Sports committee, led by Mavoko MP Patrick Makau, paint a different picture.

At the centre of the controversy is whether due diligence was undertaken in the process of awarding and executing the contracts by Sports Kenya.

MPs believe funds for the projects have been mismanaged.

They thus invited the Ethics and Anti-Corruption Commission and the Directorate of Criminal Investigations to probe the award and execution of the contracts.

They also want the EACC and the DCI to probe Sports Principal Secretary, who authorised the payments.

“Any public officer found to have violated procurement laws and the PFM Act be prosecuted in line with relevant laws,” the committee said.

After a review, MPs found inconsistencies between the work delivered by contractors and the payments made to them.

The committee found that the Karatu Stadium contractor has been paid Sh102 million – about 39 per cent of contract sum, but has only delivered 20 per cent.

At Wote, the contractor has pocketed Sh113 million – about 38 per cent of the contract sum – but has delivered only 25 per cent.

In the Ruring'u project, the contractor has been paid Sh84 million, which is 29.3 per cent of the work.

Sports Kenya reported that the work was 40 per cent complete but a tour of the facility revealed there were discrepancies.

In Kamariny, the contractor has been paid Sh81.5 million of the Sh287 million contract sum.

“The amount which has been paid does not translate to the total work done on the ground,” the report reads.

At Kinoru Stadium, Sh740 million has been paid to the contractor executing the Sh869 million project - translating to 85 per cent.

Sports Kenya is expected to provide details on the involvement of the Defence Ministry and the Meru county government in the project.

“On the contrary, they engaged private consultants who did not demonstrate any competency in their work.”

“It was noted with concern that most of the contractors undertaking work are behind schedule which may lead to delays in the completion of projects, variations,” MPs said.

They directed Sports Kenya not to process any additional payments for any company that was paid more than the scope of work they have delivered until they deliver work commensurate with what they were paid.

“Indeed, the Sports department should not initiate any new projects until it delivers on the ongoing projects,” the committee said.

It recommended the termination of the contracts of private consultants found to lack the skills to competently supervise the projects.

“Engage the Public Works department for the supervision of the remaining aspects of the projects,” the team said.

There are concerns the projects may delay further over no budgetary allocation by the National Treasury for the current financial year.

Post a comment
WATCH: The latest videos from the Star
by MOSES ODHIAMBO Journalist and Political Writer
News
30 October 2020 - 05:00
Read The E-Paper