Why Kenya may reimpose restrictions after surge in virus cases

• Some of the hospitals are now overwhelmed, forced to only attend to those who are in critical need.

• Shools are now areas of concern, after the death of Tononoka Secondary School principal Mohammed Khamis on Monday due to Covid-19 complications. 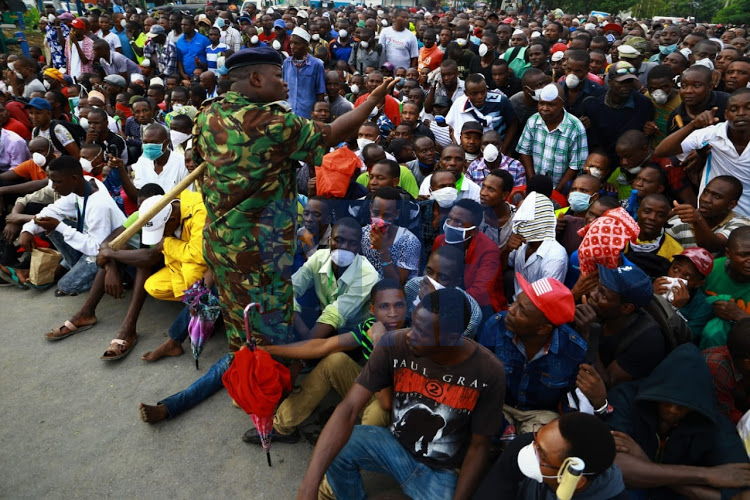 Mombasa residents rounded up before the start of the curfew on March 27, 2020.
Image: JOHN CHESOLI

The short-lived joy of Kenyans that the country had started flattening the virus curve is now being replaced with fears of a second wave after a surge in new confirmed cases.

The worrying fact is that the virus is spreading rapidly across the country apart from the hotspot counties of Nairobi, Mombasa, Kiambu and Kajiado.

The virus cases declined between August and September, with the country even at one point recording below 30 cases.

The World Health Organisation, however, warned the county not to lower their guards, saying that it was important to interrogate if the scenario was an indication of country’s true flattening of the curve and how well it represents the national picture of the overall Covid-19 status.

On September 28, President Uhuru Kenyatta eased Covid-19 restrictions and partially reopened the economy following a decline in the cases.

The President allowed bars to resume their operations, hoping that the bar owners would put in place mechanisms to prevent further spread of Covid-19.

Field hospital for extra COVID capacity has arrived. Aga Kahn, BPU & #USAMarafiki have teamed up to respond to this pandemic and the next. pic.twitter.com/UAr8V8riL6

At the same time, Uhuru revised the timelines of the dusk-dawn curfew, readjusting it to 11 pm-4 am for the next two months.

The key message to Kenyans was that the country wanted to start its economic recovery, hence people were asked to take full responsibility.

The President had warned that his administration would not hesitate imposing restrictions in case the number of positive cases shoots up.

As the country continues to battle with the virus, the government is also focusing on recovering the economy, which prompted the opening of the country.

The President had also addressed the issue of reopening schools, saying that children would only be allowed to go back to schools after ensuring that their lives will not be at risk.

However, the Ministry of Education went ahead and implemented its phased reopening of the learning institutions.

Currently, Form Four students, Class Eight and Grade 4 learners are in school, as other classes prepare to join them next year.

Education CS George Magoha admitted that the social distance will be a tall order but expressed confidence that with the employment of other mitigation factors like facemasks and handwashing, the students can be kept safe in schools.

Even so, schools are now areas of concern, after the death of Tononoka Secondary School principal Mohammed Khamis on Monday due to Covid-19 complications.

Khamis had been admitted to the intensive care unit at Coast General Hospital. He was there for five days after testing positive for the virus.

Learning at Tononoka and Star of the Sea was last week suspended following confirmed cases at the learning institutions.

The two schools were closed for fumigation and were expected to be reopened on November 2.

The country reported 4,177 new cases in September, bringing the total number of confirmed cases to 38,378. The death toll rose to 707.

At the same time, several hospitals across the country have started to report a high number of patients being admitted due to the virus.

Some of the hospitals are now overwhelmed, forced to only attend to those who are in critical need.

Some of the counties have also expressed that the situation might be worst if the cases continue to increase compared to inadequate hospital beds in place.

This comes as the country fully goes back to the Building Bridges Initiative campaign, which was officially unveiled on October 26 at the Bomas of Kenya.

Politicians have been on the highlight for engaging with their supporters in huge crowds across the country, without observing the social distance nor wearing masks.

On Tuesday morning, the data from the Johns Hopkins Coronavirus Resource Center indicated that South Africa was in position 12 worldwide with 716, 759 cases of the virus, and the first in Africa.

Countries that have reintroduced measures

On October 22, France imposed a night-time curfew banning all but essential trips out in Paris and eight other cities to curb further spread of the virus, but schools remain open.

Also, Italy announced new restrictions which will be in place for a month, where bars and restaurants will have to close early.

The Italian government also announced that gyms, swimming pools, theatres and cinemas have to close while gatherings for weddings, baptisms and funerals are banned.

Spain also began its nationwide curfew, after the government declared a new state of emergency.

Post a comment
WATCH: The latest videos from the Star
by KEVIN CHERUIYOT Online Journalist
News
27 October 2020 - 11:54
Read The E-Paper