• Handshake principals faced with trouble of proceeding with report without the risk of dividing Kenyans.

• Civil society organisations, including the Law Society of Kenya and political parties, have raised concerns about a need for further dialogue 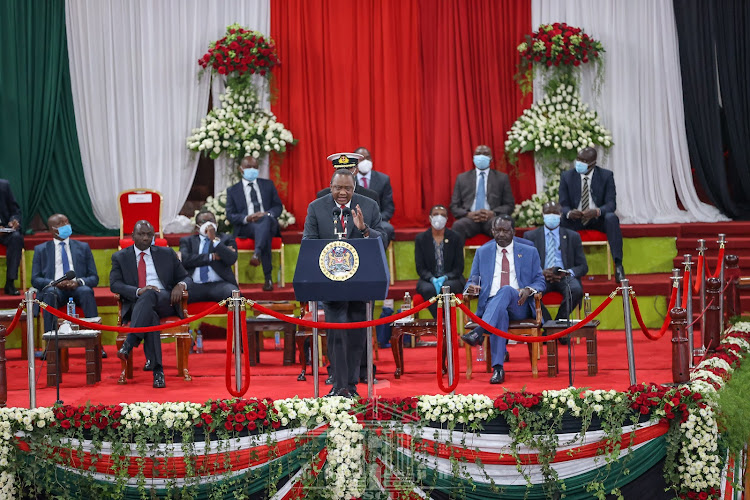 President Uhuru Kenyatta and his Handshake partner Raila Odinga have a huge task of building consensus on the BBI report to avert a divisive and polarised referendum.

Their call for a non-contested referendum on the BBI report appear to have hit a snag, with many voices opposing sections of the document.

Deputy President William Ruto poked holes in the report at the launch on Monday, after ANC leader Musalia Mudavadi raised some reservations.

Ruto tore into the report — suggesting a number of changes — some of which antagonise President Kenyatta’s reform agenda.

The DP questioned how the expansion of the Executive would entrench political inclusion — contradicting his boss who says the proposal would end “a zero-sum game of winner-takes-it-all”.

Civil society organisations, including the Law Society of Kenya and political parties have also raised concerns about a need for further dialogue.

Mudavadi, Kitui Governor Charity Ngilu and trade union top brass similarly called for the tweaking of the report before it is presented to the people.

Some activists have pledged to oppose the referendum, saying all the President needs to do is to implement the 2010 Constitution.

The clergy are yet to make their stand known. However, Akorino leader Archbishop John Njiru said Tuesday the report would increase the tax burden.

Uhuru and Raila allies have separately cautioned against opening up the BBI proposals for further amendments, with some alleging it’s a plot to scuttle the process.

“BBI did not begin today. Those with new proposals are simply failing to appreciate that the process of taking views must come to an end.”

Ndaragwa MP Jeremiah Kioni told the Star it would be impossible to satisfy everybody.

“The thing is how much room do you want to create? In any case, why are people invited to vote? A vote is held because there is a team you will not satisfy but you can always move with the majority,” he said.

He took a swipe at the DP, accusing him of misleading Kenyans with his take on the inclusivity question.

The lawmaker said the BBI report had recommended that only the prime minister would be appointed from among MPs and not the two deputies.

“DP Ruto was not being honest. The deputy premiers will be appointed by the President from outside and made ex-officio MPs,” he said.

The Constitution Implementation Oversight Committee chairman argued the two posts would thus cater for communities or groupings that will have been left out.

Similarly, a group of youthful leaders from Western on Tuesday asked President Kenyatta and Raila not to open the BBI report for further review.

"The window to give views is closed. The Constitutional Amendment Bill is sealed; we are not going to open discussion on an issue that has taken two years," Sifuna said.

Amisi questioned why the DP squandered his chances of enriching the document when he refused to submit his views before the Garissa Senator Yusuf Haji-led steering committee.

The leaders also vowed to help in mobilisation of signatures required to kick-start the referendum process.

“The Deputy President is arrogant and full of himself,” the former Kitutu Masaba MP said.

The other challenge is that the term of the BBI team, offcially known as the Steering Committee on the Implementation of the Building Bridges to a United Kenya Task Force has expired. The mandate of the team lapsed on June 30.

This means that any decisions made by the team outside the legal timeframe could be challenged in court unless their term is reviewed.

Contacted for a comment on the next phase of the BBI process, joint secretary Paul Mwangi said they would give a way forward soon.

Critics of the BBI report fear that the lack of a framework to collect views to revise some of the proposals could be a scheme to lock them out.

On Tuesday, Elgeyo Marakwet Senator Kipchumba Murkomen said people with alternative views were unsure of what will follow.

“Nobody knows where we are going from here, a report has been compiled, it has been unveiled and the discussion has begun but we don't know who is collecting the information and where does this go from here,” Murkomen said.

He was also concerned about agriculture, appointment of a Judiciary Ombudsman by the Executive, the creation of a Police Council, and IEBC appointments by political parties.

“To recommend that we will have a police council chaired by the CS would derogate the independence of the police,” he added.

Ruto had also questioned the rationale for changes in the structure of the Senate, saying it would be best elevated to an Upper House.

“Accompanying the increment of county share of revenue to 35 per cent, the recommendation on the Senate should not be a downgrade but an upgrade to an Upper House,” the DP said.

He further criticised the proposal to have counties pick women senators, saying there was no point of moving them to a downgraded House.

Ngilu was concerned that the report has not addressed the two-thirds gender debacle.

“The 70 positions in National Assembly should be given to women. We want the two-thirds gender rule to apply in the five positions at the Executive.”

Musalia, rooting for another window for further consultations, also vouched for a stronger Senate to handle devolution effectively and opposed the appointment of Judiciary Ombudsman by the Executive.

He said the BBI proponents should create space for further debate so that more Kenyans can accept the report.

“I emphasise that we look at these issues now so that by the time we reach the plebiscite we shall have reached a broad consensus,” he said.